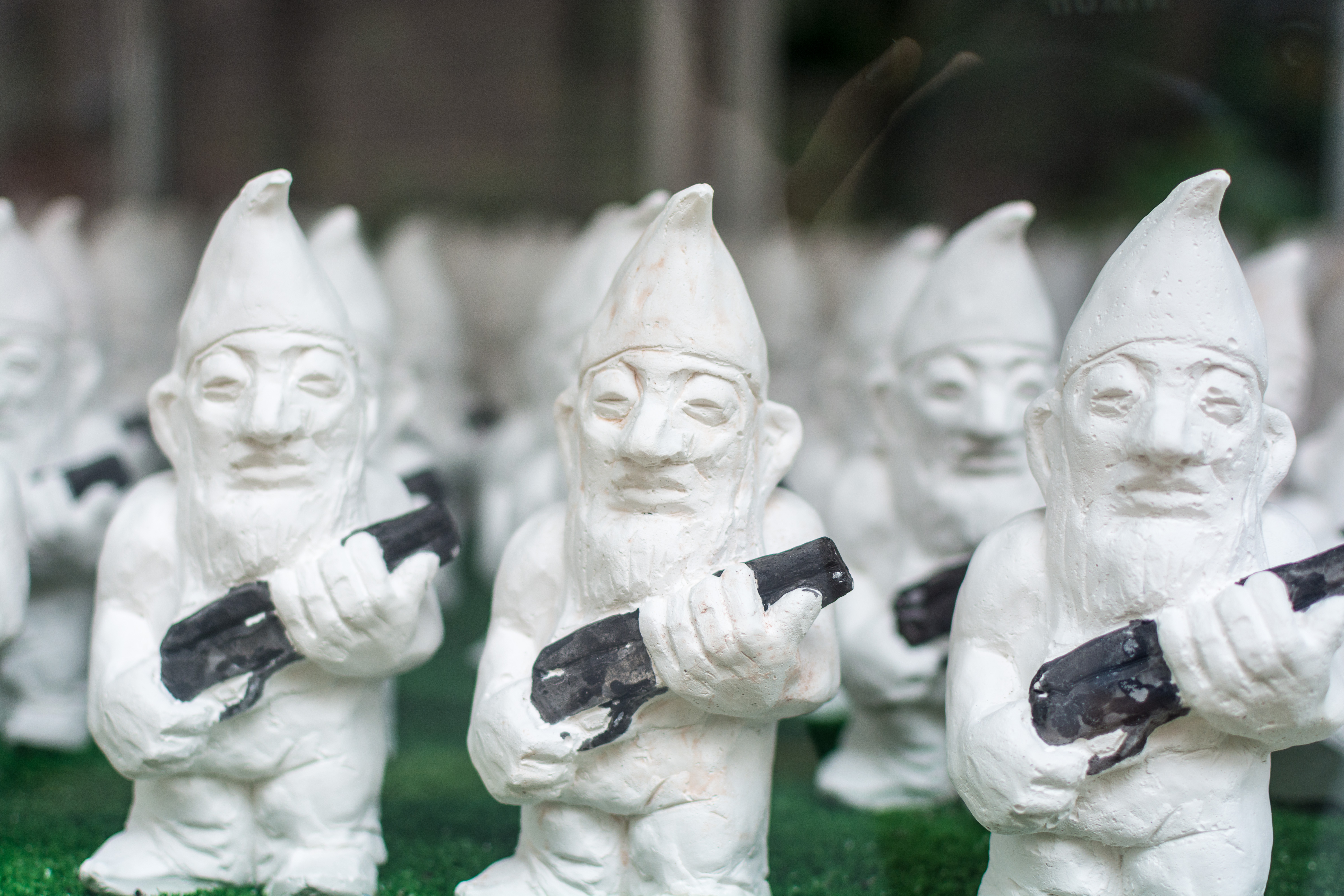 The gnomes standing in the gardeHouse. (Photo by Simon Curtis Ginsberg ’20).

Three hundred and six gnomes stand in the gardeHouse of Lafayette, just down the road from Sullivan Parking Deck. Each holds a small toy gun.

They are an art installation by Frederick Wright Jones, an art professor from Muhlenberg College, who said that the number 306 was not randomly chosen, and neither was the location.

“[Three hundred and six] is not a random number. It’s the number of electoral college votes [President Donald Trump] was supposed to get,” but he got two less because two electoral college members did not vote for him, Jones said in a talk at the college on Wednesday about his art.

“In essence, [the gardeHouse] was the perfect site for the gnomes. [The gardeHouse] protects the students from unknown dangers. It’s very much about the fear of the unknown and what might happen,” Jones said.

The gnomes all together represent a large voting block of the population, Jones said. Their small guns are a representation of protection and fear of losing what one has, he added.

Half African-American and half white, Jones said he has always felt himself pulled between two worlds and able to experience two different walks of life. Traveling often to Germany in adulthood, he feels the same sense of in between-ness in that regard. He portrayed this in his art with a performance piece where he trudges through a body of water, as he often travels across the Atlantic Ocean.

Jones said he draws on current events for many of his art pieces. Aiming to create an interactive environment for his audience, he often makes tools and toys that they can engage with. One such contraption enabled someone to make Russian president Vladimir Putin and two other “masculine” world leaders dance in a funny way by pulling gears.

He said he formed it to bring together two “peaceful organization[s],” which when paired side-by-side mean “civil war” to many people. Its website says it was created to give the “political left and right” a forum to discuss issues ranging from “gun responsibility” to “economic uplift.”

Jones said the NRAACP has held forums and succeeded in propelling discussion.

Robin Riley, Director of Multicultural Life at Muhlenberg, said at the talk that she questioned this idea when Jones first brought it to her.

“I remember I didn’t see how [the NRA and the NAACP] connected, partly out of fear,” she said. “If black people were to take up weapons, what would be the consequence? Because just black bodies alone are [considered] dangerous.”

Riley said that she periodically thinks about what the title and the purpose of the organization means, and Jones said that that was partly the purpose itself.

“That’s the troubling part, because it’s not just the names [joined together]. It’s the history all folded into that,” he said.

Jones said ultimately in his work he wants his audience to see where he is coming from in order to broaden their perspective.

“The idea I’m trying to bring across is that my work is very experiential. It’s about my experiences and how I see the world. For me, it’s a journey, trying to figure out where my place in society is,” he said in an interview after the talk. He added he hopes he helps others find their place in society too.