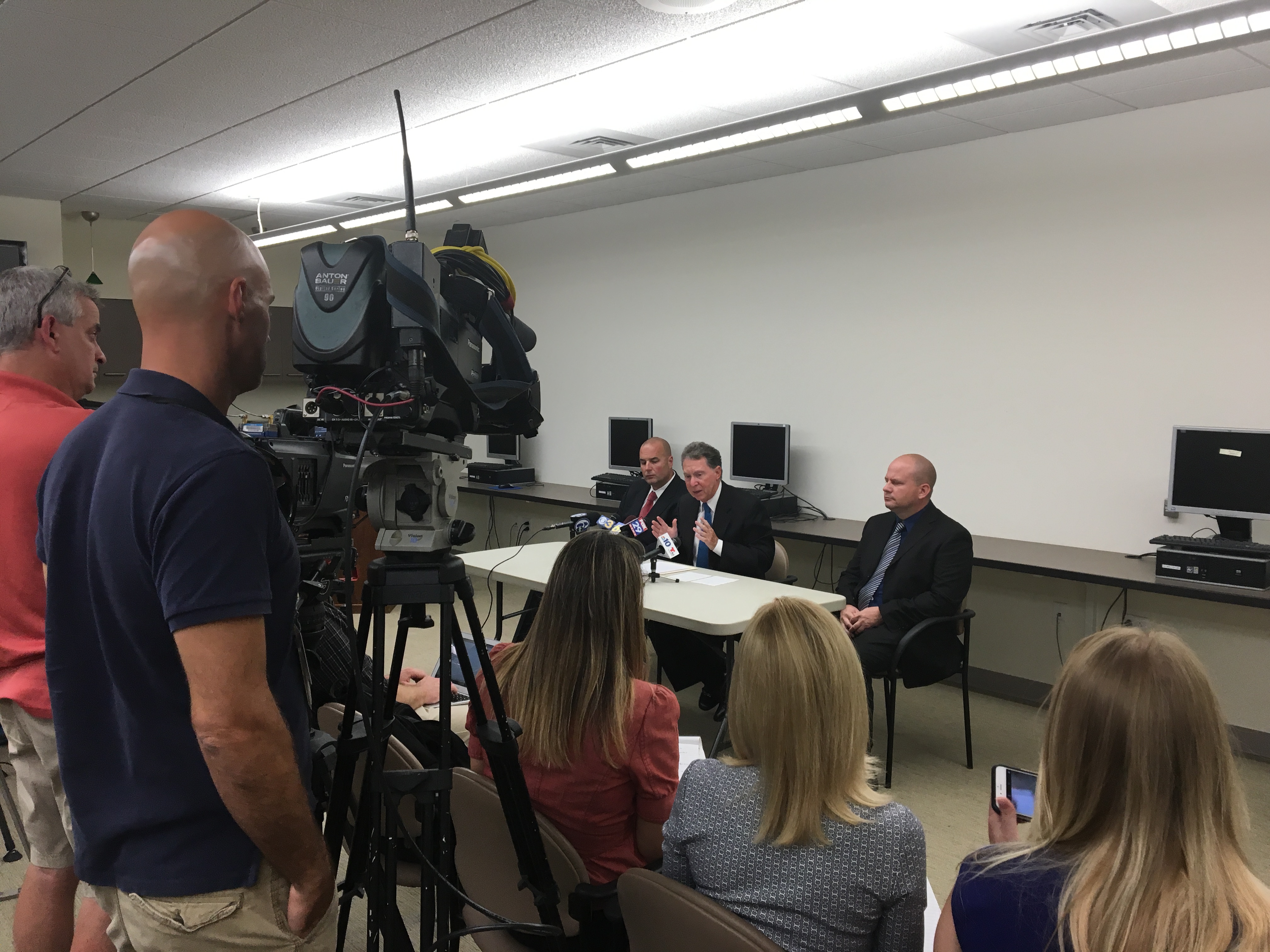 The press conference (9/19/2017) held by the Northampton Country District Attorney regarding the investigation into the death of McCrae Williams ’21. (Photo by Kathryn Kelly)

As the investigation into McCrae Williams’ death continues, no evidence of criminal conduct exists at this point, Northampton County District Attorney John Morganelli announced in a press conference Tuesday. Campus activities are slowly returning to normal.

“We’re going to continue with our normal protocol as far as patrolling” in and around campus, Director of Public Safety Jeff Troxell said. “Our protocol is status quo.”

Before Williams ’21 died of a major head injury, friends believed he was recovering from drinking alcohol, periodically checked on him for about 22 hours and called the lacrosse coach before Public Safety, Morganelli said in the press conference.

If a student sees his or her friend throwing up from drinking alcohol, Troxell said, they should call Public Safety’s emergency number for medical attention. He declined to comment on any specific points of the investigation.

Morganelli said that as of now, no charges will be pressed against any of the students involved, despite apparent underaged drinking. Twelve to thirteen students were interviewed by police. They were cooperative and their accounts were all consistent, but Morganelli said a “handful” of students obtained lawyers.

The timeline of events as outlined by Morganelli began Friday night. Williams, a member of the men’s lacrosse team, started drinking on Friday night at a party in Ruef Hall, and possibly attended a lacrosse party that night, Morganelli said. Investigators believe that he had recovered from that consumption of alcohol by Saturday.

He began drinking again Saturday, Morganelli continued, at a lacrosse “day drink” party at an off-campus house known as “boneyard.” Members of the men’s and women’s lacrosse team were present, and there is no evidence any hazing took place.

He left the party at around 4 p.m., got food at Wawa and went back to his room by 5 p.m. A young woman was with him in his room when he had to leave to throw up in the bathroom. He came back, but when he got up to leave a second time, the woman said she heard a loud crash which she did not see occur. She turned to find Williams on the floor. It was at this time investigators believe Williams sustained his ultimate fatal head injury.

The students involved did not realize Williams had sustained a severe head injury. There were no apparent signs of injury, and they thought he simply needed to “sleep off” the effects of alcohol, Morganelli said.

Other friends came into the room after the fall, and they put Williams on his side, propped up by a backpack. By 11 p.m., another lacrosse party was going on, which ended at about 1 a.m. Williams was checked on the next morning and throughout the afternoon.

Williams was laying in bed starting Saturday at 6.pm. until friends became alarmed he was not improving 22 hours later. He laid in bed until Sunday at about 4 p.m.

Morganelli said the students interviewed stated that Williams was responsive and communicating verbally, saying he wanted to sleep, while lying in bed each time they checked on him. He at times had a pillow over his head and would pull the covers over himself.

When the friends realized Williams had been in bed for a long time and needed medical attention, they attempted to dress him, but he became combative and was very weak. They called the lacrosse coach, who immediately told them to call 911. Lafayette College Public Safety responded to the scene at 4:22 p.m. to find Williams in the back of a vehicle outside Ruef Hall, not alone. Williams died the next day of his severe head injury.

Morganelli said that this case is “not a Penn State case,” referencing the death of Tim Piazza, a Penn State student who died after drinking heavily and falling after fraternity brothers did not call for medical assistance.

Troxell and Morganelli recognized that underaged drinking happens on many college campuses. Troxell said that Public Safety works to educate students about alcohol, while enforcing the law which outlaws underaged drinking.

Troxell said the Good Samaritan policy remains in place, applying to athletes and non-athletes alike. This policy states that anyone “[seeking] emergency assistance for dangerously intoxicated individuals” and the person dangerously intoxicated will not “be subject to formal disciplinary action,” according to the counseling center’s website. The student in need will only be required to attend an educational follow-up.

Oh, his poor family. This is so terribly sad.

The title of this article is misleading. It should be retitled along the lines of “investigators announce the series of events leading to….” instead. Or perhaps the same title without “parties.”

The kids who failed to help him are educated about head injuries and even sign a document as an athlete that they will report any potential head injury. This on top of the Good Samaritan agreement that all students sign some how did not drive anyone involved to action.

The Fact that it was discovered by the investigation that he started drinking with the lacrosse team shows that he drank with the team and was underage when he did as well as the other players , the alcohol was still in his system when he drank the next day and passed out and hit his head eventually leading to his death . He was a Lacrosse player at the college but is or was a student first , why does the team name and association to the team come first in the press ? He was a student first! We still see the Lacrosse team training , practicing and weight training on campus ? Despite the fact that the other players were drinking with him at the start of the week end . Teams have been suspended for much less . Let alone drinking that lead to a fall ( passing out ) that lead to his death .