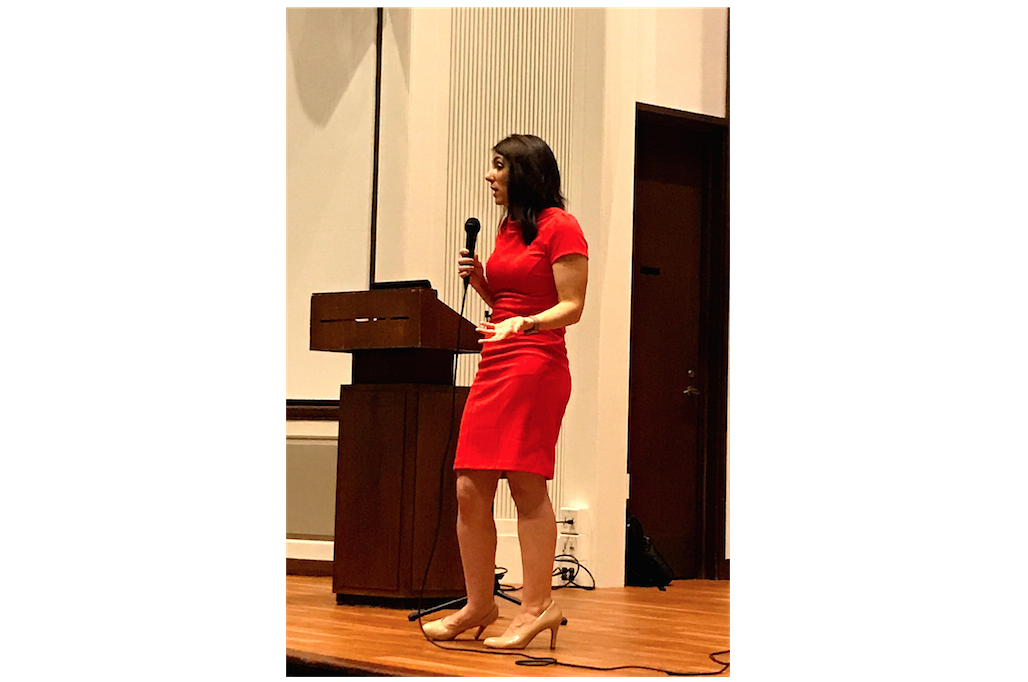 Former Lafayette history professor Dr. Emily Musil Church is working to incentivize people to solve major world problems through her new endeavor as Director of Strategy and Impact at XPRIZE Learning. She visited on campus on Monday night to teach Lafayette more about it.

“What we do is design and operate large-scale incentive competitions. Basically we get large prize purses ranging from 3 million to 30 million dollars, and we design competitions that are meant to solve a grand challenge,” Church said.

“We try to bring in innovators, anybody who has a good idea about how to use technology to solve a major civilian problem,” she said. “It’s not just about some small change, this is about exponential growth and technology that’s going to be radically different.”

Church’s talk, titled “Innovation and Inclusion for Social Good: XPRIZE, Technology, and Building the Future,” began with Church introducing the mission of XPRIZE as a nonprofit organization.

The main focus of Dr. Church’s talk was the latest XPRIZE competition, the $15 million Global Learning XPRIZE. The prize challenges teams to develop an open source learning software for children who don’t have access to quality schooling, Church said. The software solution should enable children in developing countries to teach themselves reading, writing and math within a 15 month period, she said.

Church included statistics about child literacy. She said in her presentation that about 250 million kids lack basic literacy and numeracy skills and about 57 million have no access to any primary school.

“Think about how transformational it will be for all of us if [those 250 million kids] do have access to education,” said Church.

Church shared that the field testing for the competition, which is set to begin in November of this year, will take place in Tanzania. In Tanzania, XPRIZE will work closely with the Minister of Education in Tanzania, World Food Programme, UNESCO and local communities. Solar charging stations have been installed in several communities and Google has provided thousands of tablets for the children, Church said.

According to Church, this is the first XPRIZE to focus on global learning. The competition, which launched in 2014, is being sponsored by Tesla Founder and CEO Elon Musk. If none of the softwares are successful, however, Musk will not lose any of his money, Church said.

XPRIZE Learning, based in Los Angeles, Ca., designs and operates large-scale incentive competitions, Church said. These competitions, however, all serve a similar purpose.

According to a document about XPRIZE, Charles Lindbergh won the $25,000 Orteig Prize, which inspired the creation of XPRIZE, in 1927.

“Charles Lindbergh was a postal carrier, which goes to show that it’s not necessarily the people who you think that are going to be the ones who win,” Church said.

Church went on to discuss the four pillars of XPRIZE, which include the XPRIZE Institute, the Visioneers Summit, the competition itself and measuring global impact. According to Church, prior to the organization’s new CEO Marcus Shingles, pillars one, two and four had not previously existed.

“XPRIZE has changed, so now we are saying ‘we want to be able to measure impact.’ We don’t want to just say that the technology was created, but we want to look at how we know that’s it making a positive impact in the world?” Church said.

“It’s a really human project, and that’s my background, I’m a humanist. Seeing how this might dramatically change, in theory, the development world and even if it’s not this technology, just using innovation to solve problems, would be amazing,” she said in an interview.

Sponsored by departments across campus including Women’s and Gender Studies, Engineering Studies, Mechanical Engineering, the Engineering Division, IDEAL and The Forum on Technology & the Liberal Arts, Church’s talk attracted a crowd of students and faculty alike.