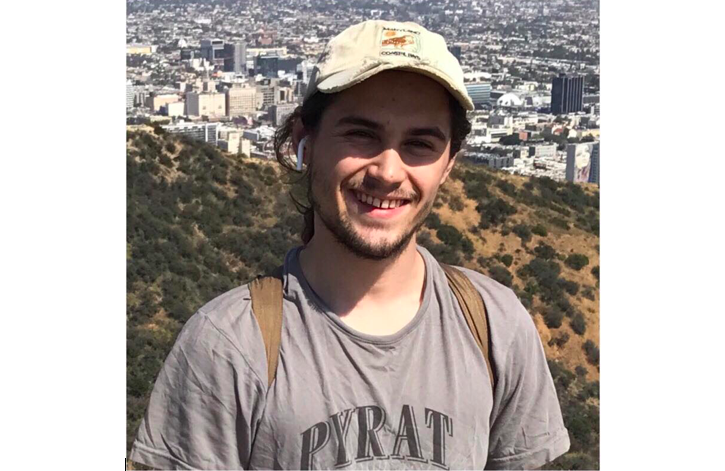 Friends, family and members of the Lafayette community gathered in silence, holding candles in memory of Joe Kirkpatrick ’19. On the count of three, all the flames in the circle went out with a puff, and the smoke carried up the love and intentions of those touched by Joe’s presence.

The candlelight vigil for Joe was held Sunday in the backyard of the Living Learning Community Interfaith House. It was an intimate gathering of people who shared memories of Joe, from times he touched their lives to anecdotes about his radio show with WJRH or his introspective quandaries.

Joe died in an off-road driving accident in May while on vacation in Ensenada, Mexico with his freshman year roommate, former Lafayette student Luis Balaguer Escobar. His formal services were held in Galena, Md. over the summer, but Santelli, Abby Williams ’19, and Lola Wegman ’19, felt there needed to be an opportunity for his peer community to mourn together back on campus.

“We felt like more needed to be said than what was said in his official church service, so we thought we’d make it more personal and talk about, like him with his friends and his peers and what it was really like to get to know him,” Williams said.

The vigil was planned by the residents of Interfaith House, Santelli, Williams and Wegman. Chaplain Alex Hendrickson, who is also the advisor of the Interfaith House, and Vice President of Campus Life and Dean of Students Annette Diorio assisted in the planning as well.

The interfaith house was chosen as the location because it was one of Joe’s favorite spots on campus, Santelli said. At first, the vigil was planned to be a smaller gathering where friends of Joe were directly invited. However, Wegman said once Hendrickson suggested opening the vigil up to the community, she realized that it was important to allow everyone Joe had touched at Lafayette to feel included.

“Floods of people came in, and we were like ‘Oh my god this is amazing’. I didn’t know half of them and I was just [thinking], ‘Look at his impact,’” Williams said.

Joe’s sister Helen Kirkpatrick was also in attendance at the vigil. This vigil was her first time at Lafayette, and all three girls felt it was important she got to meet his friends and see Joe’s “natural habitat,” Williams said.

“[Helen] was so grateful we did this because she had never even been to campus. She never saw the school that he loved and the people he loved,” Williams said.

Several of the stories shared surrounded the McKeen Hall fire escape stairs, a place Joe could often be found. Wegman has started creating stacks of rocks called cairns in a nook by these stairs, in order to help the space feel less empty.

Wegman invited others at the vigil and students who couldn’t attend to “add rocks,” whenever they pass by.

Hendrickson and Senior Associate Director of Corporation, Foundation and Government Relations Mary Armstrong Wilford-Hunt have been working on creating a memorial bench for Joe as well. The location of the bench is not definite as of now, Hendrickson said.

Between the shared sentiments and silences throughout the vigil, friends said Joe’s spirit will live on through those he’s impacted on campus. As Santelli said in her opening remarks, she sees signs of Joe every day, and friends said this vigil was what was needed to honor Joe’s life on campus.

“I just feel like it was the closure that a lot of people needed. And if not closure, at least the release they needed,” Santelli said.

For students who were unable to attend the vigil, or who chose not to speak, their memories of Joe can still be shared. Hendrickson said that students may write letters to Helen, which can be given to either Hendrickson or the residents of the Interfaith House.