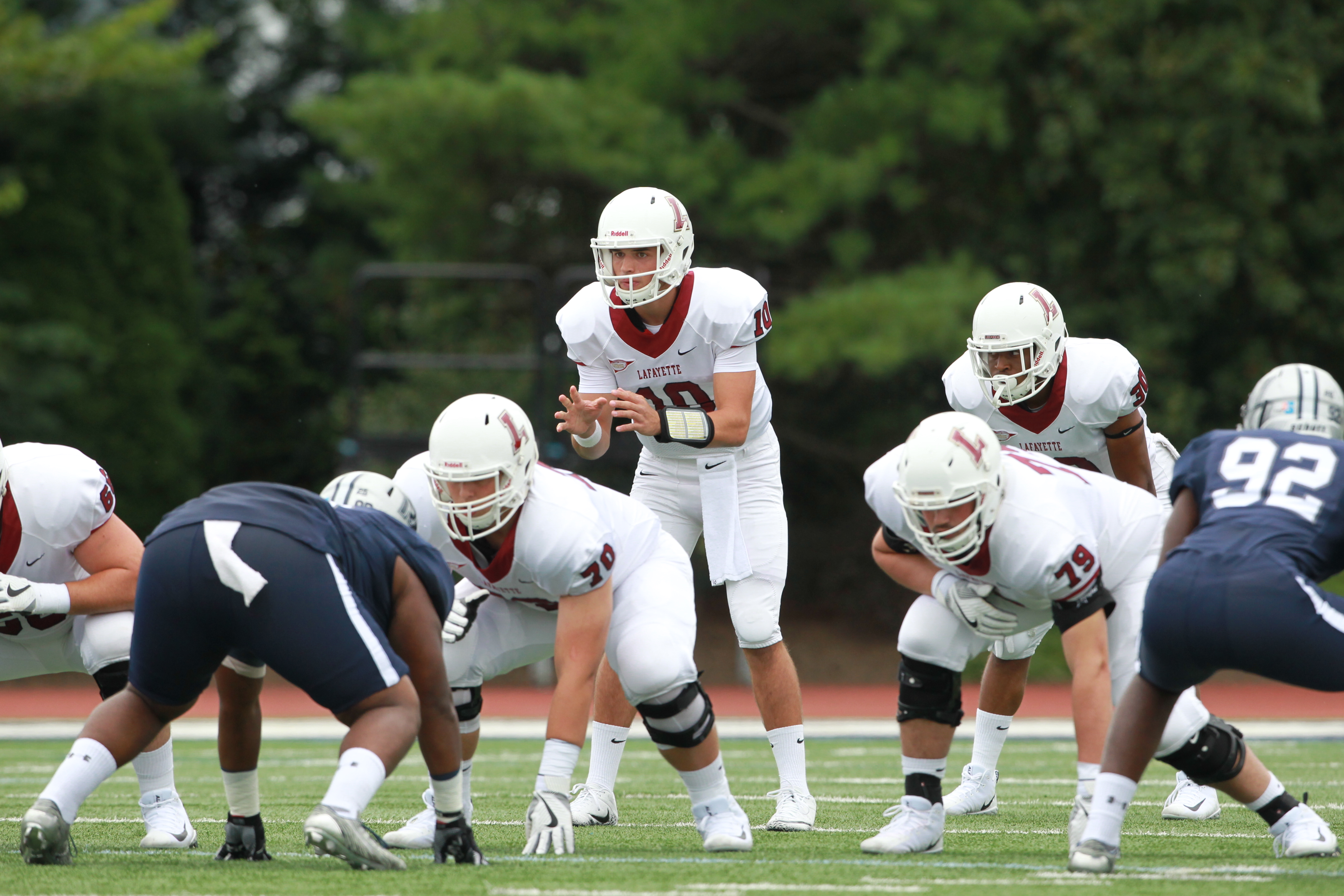 AJ Traub: You’re the first freshman quarterback to start for Lafayette in the Patriot League era. How does Coach [John] Garrett’s confidence in you affect your game?

Sean O’Malley: Him having confidence in me also does help me boost my own self-confidence. It’s great having such a trusting relationship with the coach and an open dialogue about what’s going on. If I have any questions, I know he’ll give me a great answer.

AT: The game stayed close into the fourth quarter and you were able to record a pair of touchdowns. How will the team use this game to improve for next Saturday?

SO: The last two touchdowns showed that we’re not a team that’s going to give up easily. So we’re going to use that as motivation to move on to the next game.

AT: You led the offense on some long drives. How have you established connections with some of the more senior receivers as a freshman?

SO: It all starts on the field. Since the first day, we’ve been out there throwing routes together. I’ve gotten to know what type of routes they like and where they like to catch the ball. It’s just as important to me as the off-field connection we’ve established. We’ve got a really good group of guys and the trust built-up between all of us is going to push us forward and help us be successful.

AT: Coach Garrett praised the way you “never took a backwards step.” What helps you keep that mindset all game?

SO: I try to keep a generally positive mindset throughout the game. In football, adversity is inevitable. Because of that, what’s important to me is how I’m able to respond to adversity. That’s what makes a good football team.

AT: Coach Garrett and your teammate Matt Mrazek agreed after the game in interviews with Lafayette Sports Network’s Gary Laubach that you’re a special player. How is the experience of developing your game with such a supportive team?

SO: It’s been great. I’m very thankful to be around a great team and coaching staff.

AT: What are your thoughts leading up to your home debut on Saturday?

SO: I’m very excited to play our first game at home. I’m ready to get into the preparation and help put our team in the best position to win.

AT: You were one of the last recruits for your class. How did you choose Lafayette as your school to play for?

SO: I contacted the coaching staff here. They asked if I wanted to come for a visit, so I came out. The minute I set foot on campus, I knew this would be a great opportunity. One that was too good to pass up.

AT: What are your goals for your football career at Lafayette?

SO: First off, my number one goal is to help the team win Patriot League championships. With that comes being the best teammate I can possibly be.

AT: What gets you pumped up before a game?

SO: I listen to some music to help focus my mind. I also get super pumped up at the idea that we’re about to play a game. It’s really exciting to me. As a kid, I grew up watching a lot of college football and I’ve always wanted to be one of those guys. And now I have that opportunity, so that helps me make the most out of it.

AT: What is your favorite pro football team?

SO: The New York Giants.

SO: My favorite hobby is golf.