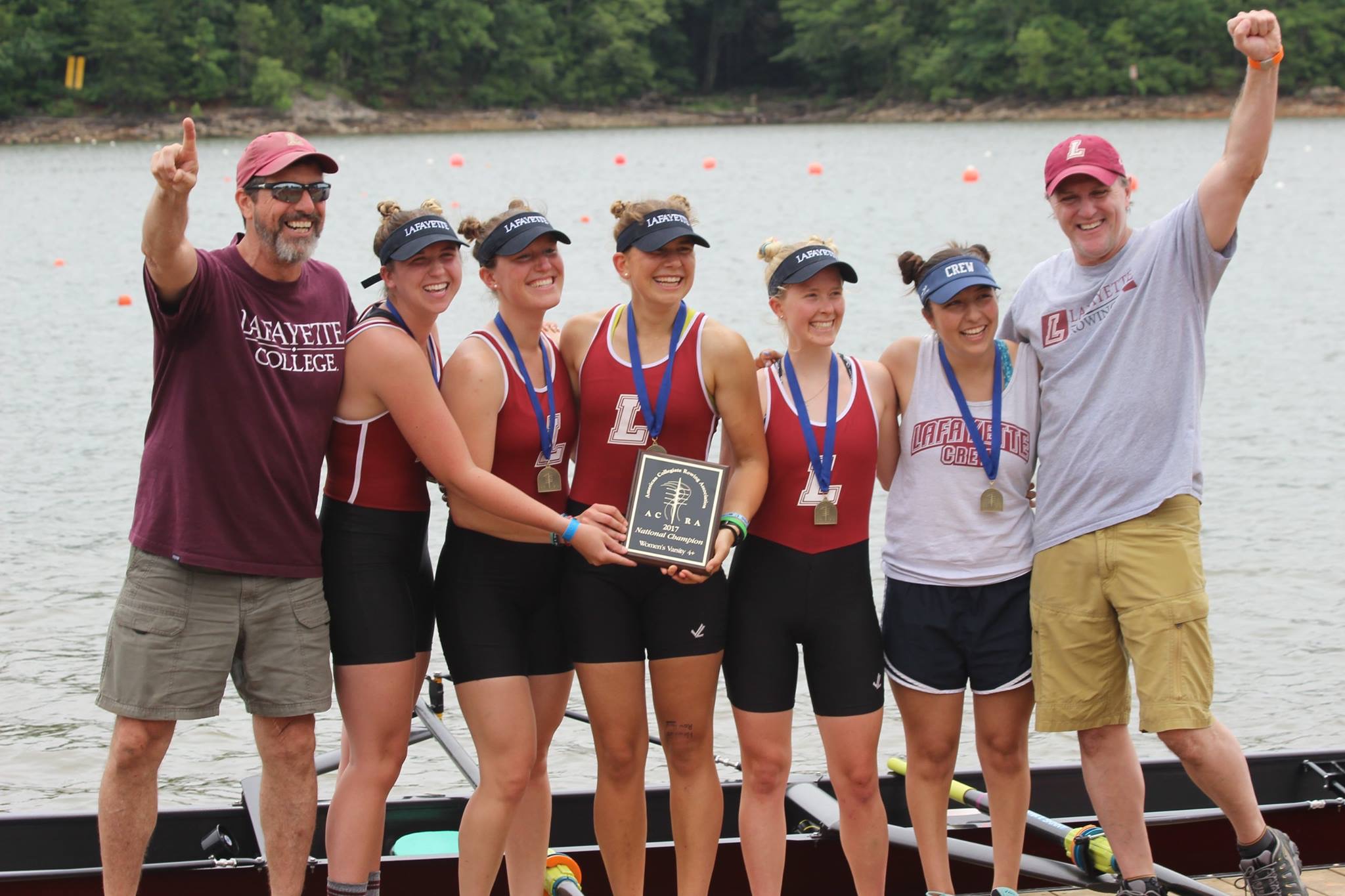 They ended their 2016-2017 season with a national championship and won gold at all of their competitions, except one bronze at the first. Now, the Lafayette club crew women’s 4+ team returns to another season looking for the same level of success.

The team then headed south to Georgia with their sights on a American Collegiate Rowing Association (ACRA) National Championship against a host of bigger schools, all club teams.

“Going in, we knew we were coming off of a winning season,” the club’s vice president Nicole Harry said. “We won Dad Vails and we knew that it was going to be [an] intense two weeks before nations, but this is what our season was culminating at.”

“There was so much energy and expectation to do well, but it was more about performing as we always had and just being consistent. We knew we had been putting in the work and the work has been paying off,” she added.

For club president Emily Smith, the national championship was just the second highlight in their eventful season.

“We already had the Dad Vails, but we wanted to be able to say we were national champions because people don’t always recognize what Dad Vails really means,” she said.

“We beat Wisconsin in Dad Vails and they won the second finals [in the NCAA Regatta],” she added. “For us, if I were to list our accomplishments, winning Dad Vails would be number one, then national champions, and then the fact that we could have done well in the NCAA Regatta.”

Coming off of the Dad Vail Regatta, Smith said the team was determined to cap the season with another quality performance.

“Our confidence level was really high, but I think my favorite thing about our boat, the five of us, is that we never expected anything,” Smith said. “You had to put the work in.”

At the helm of the group is Coach Rick Kelliher. Kelliher coached at Vermont for ten years before joining Lafayette. His tenure with Vermont saw their team rise to a nationally recognized program, which registered three top-ten finishes in the Head of the Charles Regatta, the largest two-day rowing regatta in the world, which is open to more than just collegiate teams, among numerous other achievements.

“He’s an extremely good coach and he’s been coaching for over 35 years,” Harry said. “To have that level of experience at a school this small allows him to truly know his rowers and the program and develop something that can win.”

The women’s 4+ team that won the national championship was composed of teammates who hadn’t rowed before college, but Smith said their team chemistry propelled them to the top.

“When we ask our coach ‘Why do you think we’re so fast?’ he tells us that we don’t have the speed on the rowing machine that varsity programs have, but when you get in a boat it’s really how you work together as a boat,” Smith said. “He says ‘You have to get that magic. It’s just how you work together.’”

The team members built up a special connection that went into their competition.

“The community of the team is what’s so special,” Harry said. “Pertaining to nationals specifically, we never told the team that the races would be on the internet and we didn’t really know about it. But they were all watching the races online and texting us and being completely supportive. We’d been training together all season as the full team, so it was nice to feel like they were there.”

The women’s 4+ team will look to recapture that magic for the 2017-2018 season after the graduation of coxswain Julia DeFranco.

“Our boat is going to stay together for the fall, we just have to find a new coxswain,” said Smith. “Every coxswain has a different style. We’re just going to have to find someone who has a style that works really well for us.”

The new coxswain will have big shoes to fill, Smith said.

“Julia was a quick thinker and she really put her heart into our races, whereas some coxswains have the idea that they’re not as important as a [rower],” Smith said. “We can’t do anything if we don’t have a good coxswain. It makes a huge difference.”

“When you first get into rowing, you don’t really understand how difficult the job of a coxswain is,” Smith added. “They have to know what phrases the people in their boat like to hear during the races, while steering, watching other boats, telling us where we are in relation to the boats, how many meters are left. It takes years of experience to develop that skill.”

Team practices have started for the fall and the team is looking to go big, according to Smith.