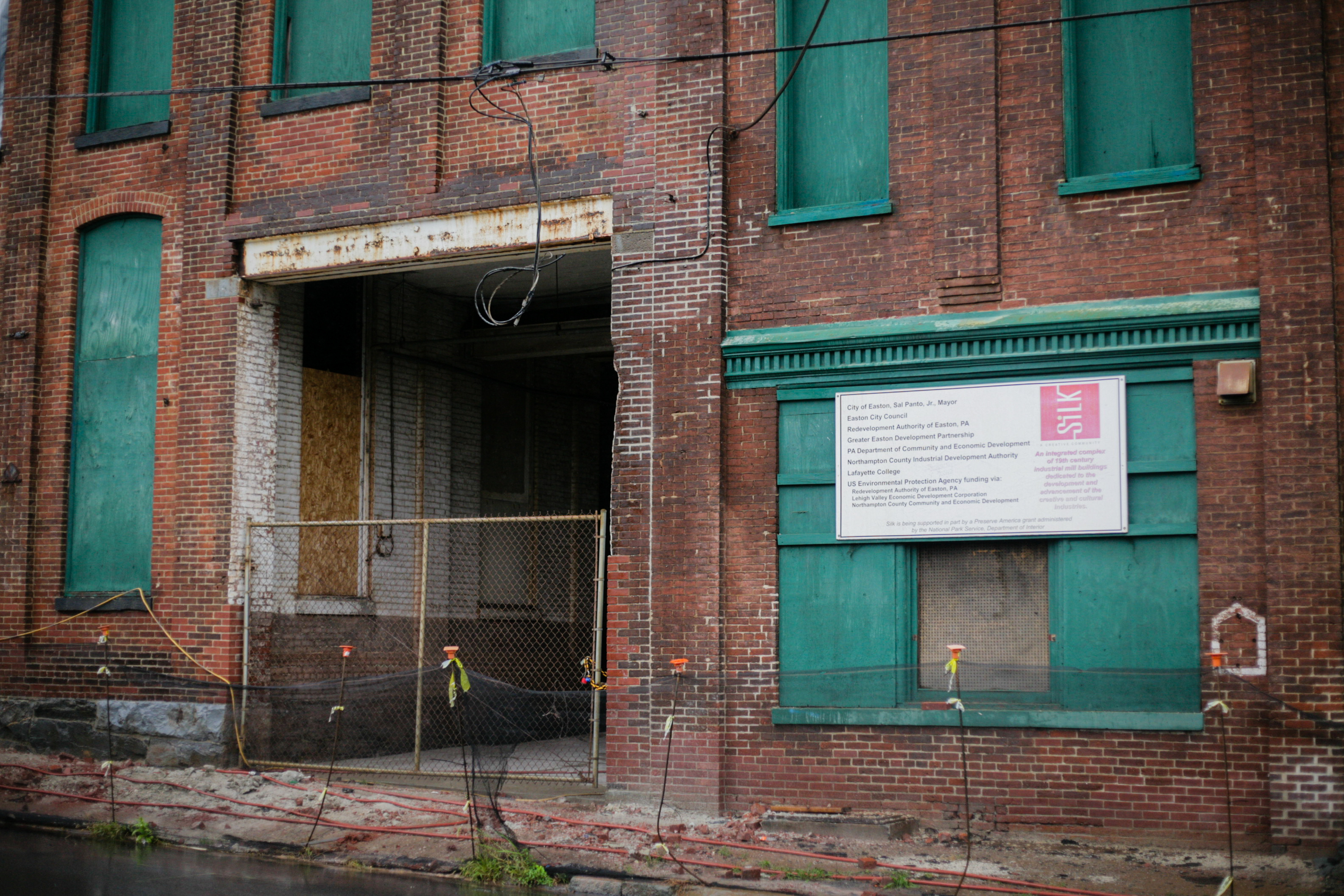 Whether walking, running or biking down the Karl Stirner Arts Trail, eyes wander to the smokestack that rises above the trees at the end of the trail. The buildings that make up the Simon Silk Mill property, which have been vacant for years, are now in the process of being renovated in a series of four phases.

According to Rice, before VM Development Group acquired the project, the Redevelopment Authority of Easton had started buying properties and doing pre-development work on its own in order to prevent the Silk Mill’s demolition.

The renovations of the Silk Mill are occurring in four phases, according to Rice. Currently, VM Development Group is nearing the end of Phase Two of turning the Silk Mill into a residential community with an arts focus.

Phase one, which lasted throughout 2016 and the beginnings of 2017, saw the completion of three buildings. The first building, a single story building, will house six commercial businesses ranging from a photography studio to a hair salon and an event planner, according to Rice.

The second completed building is residential, creating 33 apartments and commercial space on the first floor for a brewery, balloon business and web designer. The last building added a large space to be occupied by Brick and Mortar Design Studio and Art Gallery, Trinity Fitness, a cafe and a wine production company.

The second phase, which is to be completed in 2018, will be completely residential, and in total the Silk Milk will have about 160 residential units, according to Rice.

Phase three, which will not begin until 2018, will see more developments in the buildings along 13th Street, and will add a mixture of commercial and residential units. According to Rice, VM Development Group is working to bring restaurants to the buildings.

The last phase, which will be finalized most likely in 2020, will center on more communal spaces, Rice said. This phase will include renovations to the building with the smokestack and the two adjacent buildings, which will become a banquet hall and potentially a theater.

According to Rice, there are also plans to install a bridge to connect the Karl Stirner Arts Trail with the Silk Mill property.

“That will be great because obviously the development sees the trail as an extension of it and it’s certainly something you can offer to tenants as an attraction. With the dog park, the ability to walk downtown or bike downtown that way, and it’s a great outdoor space for the mill,” said Rice.

Rice said the difficulties the development group has faced have primarily been issues regarding the site’s historical significance.

“It takes longer because everything has to be approved by reviewers at the federal and state level, the State Historic Preservation Office, so that’s been a challenge. And then all of the financing is then linked to these approvals, because if you do anything before you get approval or that hasn’t been approved, you face the cost of undoing or fixing it,” said Rice.

According to Rice, financing for the redevelopment has come from various directions. Funding has come from several federal and state grants, grants from the EPA and Department of Commerce, and the Redevelopment Authority has assisted in projects like the new road that runs through the Silk Mill.

The development and tenants alike also experience tax breaks living and working on the Silk Mill property because of a tax abatement program the state was awarded.

“There are certain taxes that are abated at the site until 2023, so the developer doesn’t have to pay real estate taxes until then, which is huge. And people who live or work at the site also get tax breaks at the state level, basically income tax breaks,” said Rice.

“It’s creating its own little city, which isn’t really going to have any competition at that exit,” he said. “There’s a lot of mills I’ve seen that have been done like this which have become destinations for their architecture and for their use and for the tenancy that occurs in them.”