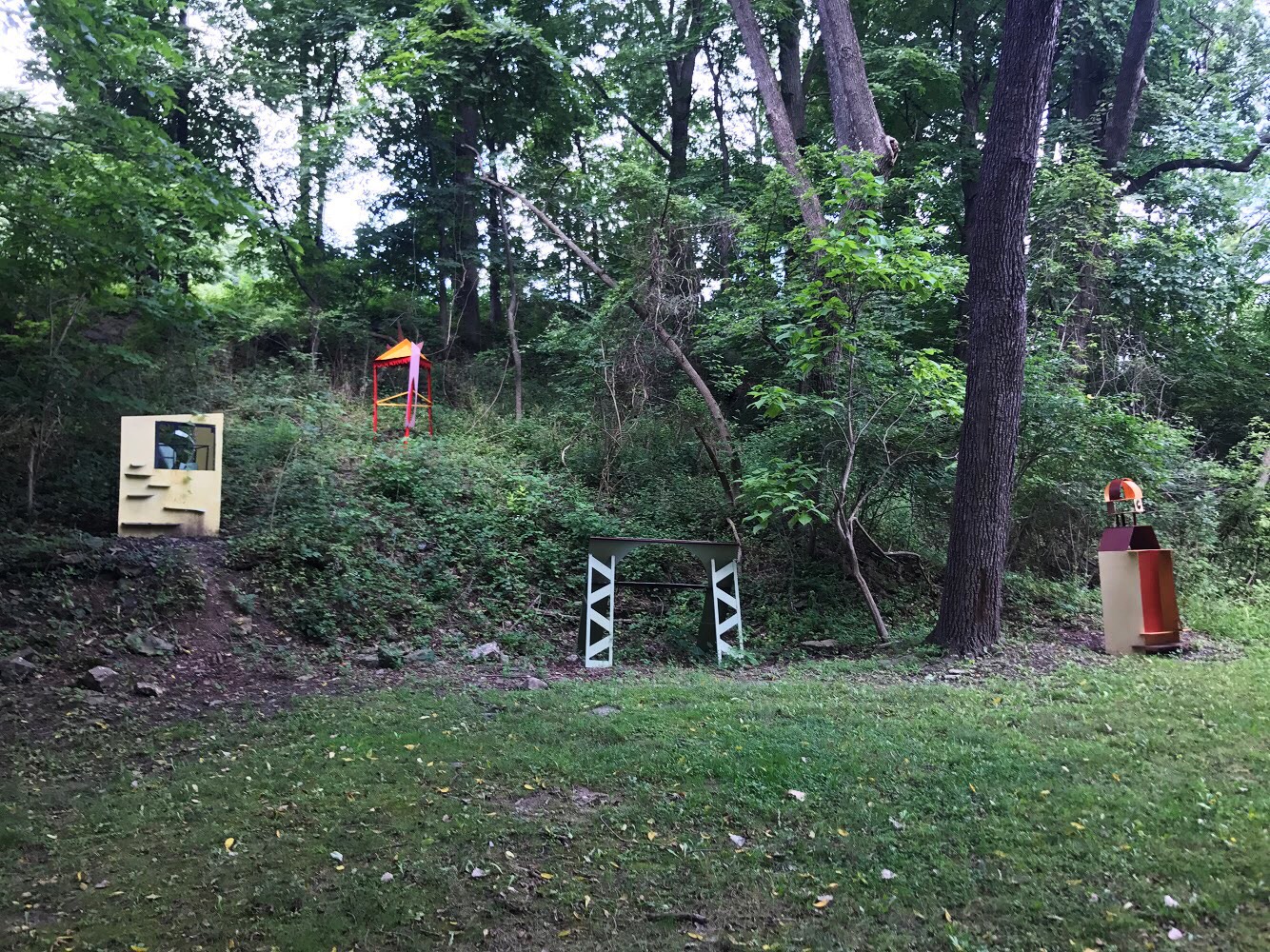 Students returning to campus may notice a few familiar structures while walking or jogging on the Karl Stirner Arts Trail. In early June, students from the Easton Area, Belvidere and Phillipsburg high schools presented their sculpture pieces on the trail which were inspired by a location of their choice in Easton.

The structures that inspired them were the Free Bridge, the old Phillipsburg High School clocktower, the Easton State Theatre and the Lafayette Hotel. The Free Bridge, the clocktower, and the State Theatre were all replications of the outside of the structures, while the Lafayette Hotel piece offered a glance inside the building.

Easton artist Ken Kewley hosted a workshop with the students to build the sculptures. Through a Lafayette Experience program with Jim Toia, Director of Community-Based Teaching at the college, they placed their creations on the trail. The pieces’ time in that location is limited to “a few years,” according to Toia.

Kewley has created sculptural assemblages based on his paintings of architectural spaces around Easton, said Toia.

According to Toia, students started with small balsa wood “maquettes,” a small prototype structure of the sculpture. Next they made large-scale cardboard sculptures and then made the steel sculptures. In the process, they learned how to cut, grind and weld steel.

“I love working with high school students because they’re pretty fearless. I think as a college student you’re aware of the expense and energy it takes to get through college, and in that respect you’re concerned with your grades more so than a high school student is,” said Toia.

Recent Lafayette graduate Connor Pirruccello-McClellan ’17 worked with the high school students alongside Toia, teaching them how to do metal work and making sure they were working safely.

“This work was so satisfying for me because I got to see the same wonder in some of the students that enchanted me and got me into metal work in the first place,” Pirruccello-McClellan said.

Pirruccello-McClellan is returning to Lafayette for the fall semester to work with art professor Nestor Gil and plans to return again in the spring to do his own installation in the Guard House, located next to the parking deck on Sullivan trail.

According to Toia, who also serves as Chairman of the Board of Governance for the Karl Stirner Arts Trail, the Board is working on bringing more installations to the trail.

“You step into nature right away. To punctuate that experience with pieces of art that allow you to contemplate man’s relationship to nature or somehow introduce aspects of nature or sustainability or some more scientific aspect of nature, those are all opportunities that we’d like to take advantage of,” Toia said.

The Karl Stirner Arts Trail is currently trying to fundraise and grow with more installations, according to Toia. The nonprofit does not receive funding from either the city of Easton or the college. Fundraising comes in the form of grants, private donors and auctions.

Artist Sam Van Aken is working on his Tree of 40 Fruit, which will appear on the trail “in a few years,” Toia said. Toia added that Van Aken’s tree is in the process of fruiting and will grow 40 different types of fruit by the time it’s finished.

Visiting artist Rachel Hayes also plans to work with local groups in Easton to construct an installation with translucent fabrics. The piece will most likely come in the form of a long ribbon of fabric suspended from the trees or a bridge along the trail, said Toia.

He added that other potential new installations include a yoga platform overlooking the river and a musical playground in close proximity to the dog park.