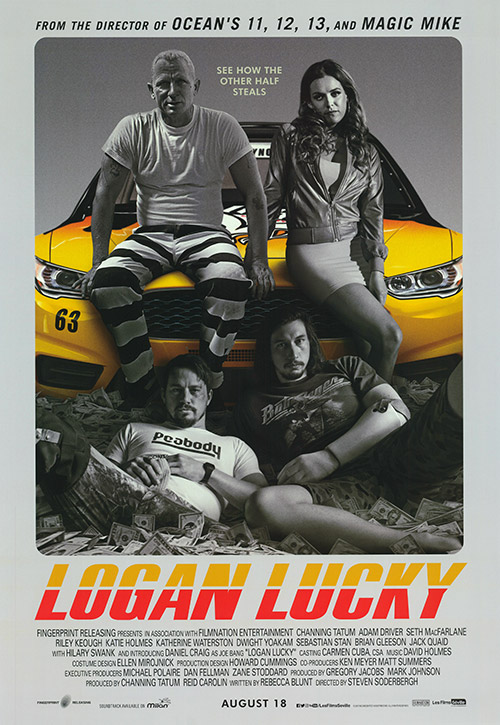 ‘Logan Lucky’ stands out from any movie to come out this summer (Courtesy of MoviePoster.com).

After a summer full of blockbusters and complicated plots, “Logan Lucky” came at the perfect time. Simple, yet refreshing and enjoyable, this film is one of the best to be released this summer.

Dubbed by characters in the film (and probably Soderbergh himself) as “Ocean’s Seven-Eleven,” the biggest criticism of this film is its striking similarity to Soderbergh’s famous “Ocean’s” franchise. They both feature zany and original characters, a vibrant and lively setting, prison breaks, and most importantly, a heist. “Logan Lucky” is just a reminder of Soderbergh’s profound expertise in the heist genre. While “Logan Lucky” is very similar to Soderbergh’s other films and lacks originality in that sense, it is unlike anything that’s been in theaters this summer.

At the center of the film’s appeal are the unique characters. The main character, Jimmy, is recently fired and recently divorced but wants more than anything to be a good father. The father-daughter relationship Jimmy has with his daughter is integral to the film’s fun nature. Jimmy and Sadie Logan (Farrah Mackenzie), play off of each other so well that it keeps Jimmy’s deadbeat personality alive and positive.

Clyde Logan (Driver), also referred to as “the One-Armed Bartender” is soft and quiet, but hysterical. Driver’s comedic timing is perfect throughout the film. “Logan Lucky” is certainly the newest addition to the list of his amazing performances.

While following her two brothers, Mellie develops into a character who is very relatable and rational. Joe Bang (Craig) is as ridiculous as his name suggests. After playing the role of James Bond for so long, Craig seems comically out of place, which is something Soderbergh most likely did on purpose. Craig, however, is a powerhouse in the film and fits into the cast well. Soderbergh’s characters are once again a showcase of his ability to balance an ensemble cast.

The plot of “Logan Lucky” is a classic redneck heist and Soderbergh’s choice to set the film in the southeast comes through with full force. The film is littered with southern accents, southern traditions, and even the weird and sometimes unnecessary side plots are filled with style. “Logan Lucky” is a shining star in a very lackluster August and is still in theaters for those who haven’t seen it yet.

Good day. your writing style is great and i love it.