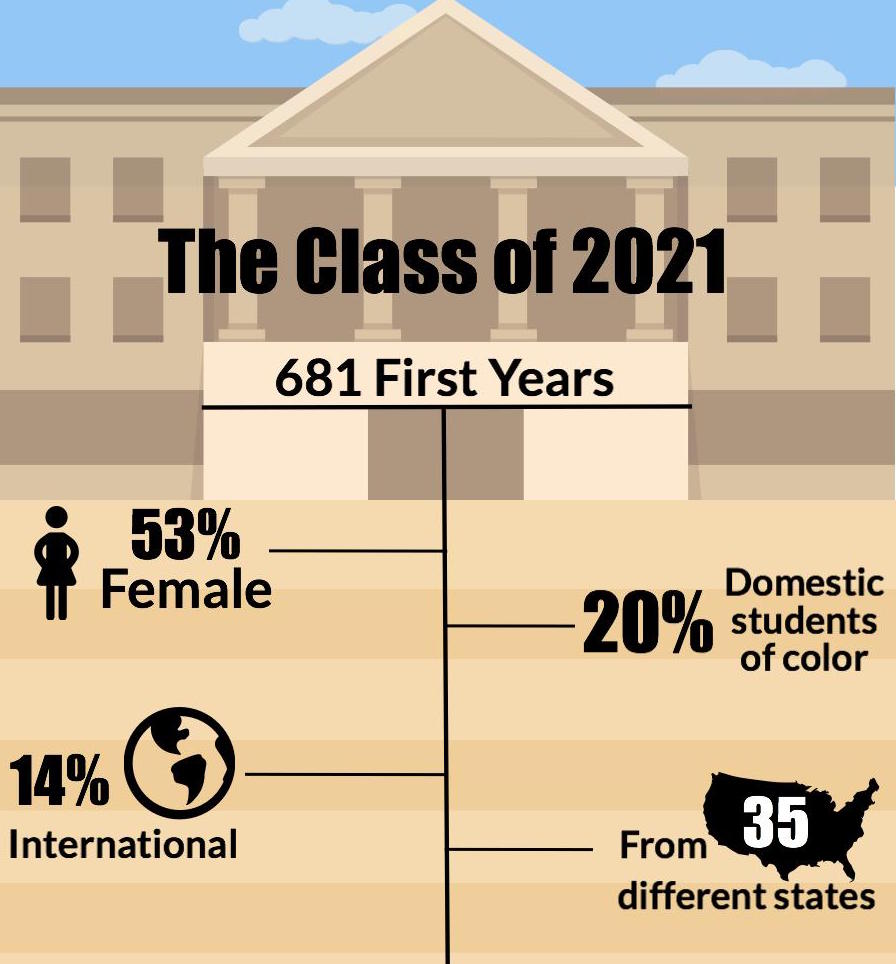 Lafayette’s new first-year class is a step in a trend toward a “new normal” in Lafayette’s admissions process, Dean of Admissions Matt Hyde said. Although the class is slightly less ethnically diverse than the one before it, Hyde added, diversity in the student body has greatly increased since at least five years ago, and rates of diversity in each class have somewhat plateaued at this rate.

“Moving forward [diversity] is a priority,” he said. “The classes that are enrolling now at Lafayette compared to five, six, or ten years ago, are significantly more diverse culturally and ethnically.”

“We’re sustaining this new normal where we are pulling more broadly nationally and internationally, so this class resembles the last few classes which, compared to a decade ago, is considerably much greater in terms of geographic diversity,” Hyde added.

The class of 2021 is comprised of students from 35 U.S. states. Domestic students of color make up 20% of the recently-arrived class, while women make up 53% of it. The number of international students, who have either dual citizenship or one foreign citizenship alone, dropped slightly from 15% to 14% from the class of 2020 to 2021.

Hyde said that he hopes to see these numbers of students from diverse identities and ethnicities increase over the coming years, and that the capital campaign, in which the college is working to raise $400 million by December 2018, will be integral in being able to admit students of different backgrounds.

“Sometimes we are challenged with the available resources when it comes to our financial aid, but given the capital campaign and the significant opportunity to award more financial aid based on need that will help our cause in enrolling classes that are more diverse,” he said.

Hyde added that this is the first official class which is meant to significantly expand the student body. The previous year’s class was 649 students, Hyde said, and the class of 2021 added 32 students to that total. The class of 2019 saw 673 students enroll at the start of their first year, still slightly below 2021’s number.

Despite the similarity to previous classes, Hyde said he is encouraged by the way Lafayette has expanded its reach beyond its own geographical area.

“Class of 2021 has pretty great dimension to it. By that, I mean they come at us from many different angles. Lafayette is becoming more national in its presence and we continue to grow beyond our backyard. It’s great to have geographic diversity.”

Something unique about this first-year class in particular is that they were the first applicants to to use the new version of the SAT, Hyde pointed out.

“It was a strange year on the testing front” due to the old SAT, the new SAT and the ACT all being options for applicants to submit to admissions, Hyde said. He added that this class is slightly more accomplished on the testing front than the class before it.

Hyde wrote in an email that when it comes to breaking the class down by household income, the admissions office does not collect the information necessary to do so, as “financial information is only collected for financial aid applicants.”

Sixteen students transferred into the college for the start of this semester, and the number of students who transferred out of Lafayette is not yet available, according to Dean of Advising and Co-Curricular Programs Erica D’Agostino. She added that that number will be released in September.