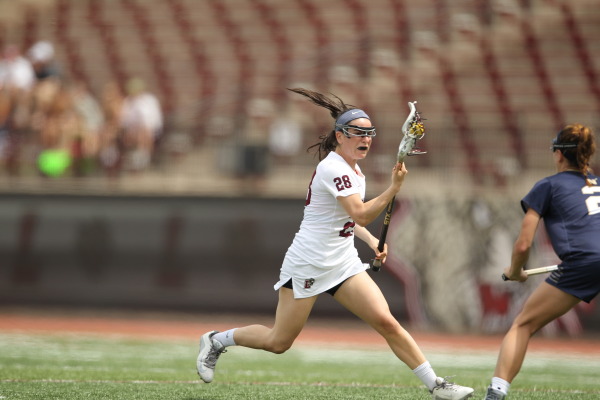 Katelyn Arnold: So, congratulations are in order for a great regular season! How do you feel moving into playoffs?

Emma Novick: I think everyone is excited because this is our first post-season for anyone on the team, even seniors, so the idea of being able to get to this point is really exciting for everyone. So I think that will propel us and really motivate us to do well.

KA: Can you talk a bit about what led to the success you saw during the regular season?

KA: How is the team preparing for Boston on Tuesday?

EN: We’re going into the game with the same game plan that we had when we first played them because it was a really close game. We’re playing them man-to-man, but matching up with certain players. I think that will lead to our success on the defensive end. Offensively we’re just doing the same thing that we did in regular season, which was just to move the ball quickly, look for each other, be flexible, be creative.

KA: How do you think the regular season has prepared you for this matchup?

EN: We’ve watched film, we’re used to how they play, we’ve been there before, we know their goalie, their team, their coach. I think it’s the familiarity of it that will prepare us.

KA: So you personally have also had a tremendous sophomore campaign, can you tell me what it’s been like to contribute so greatly to the team in just your second season?

EN: I’ve continued to work off people. It’s been a really nice thing to have pressure divided between all of us, not one person having the responsibility to score. I also think our chemistry is really good, so it comes naturally. We’re not really thinking of ourselves when we’re playing. We’re thinking of each other and we really help each other to succeed. I think that that has contributed to my success and the success of other people on my team.

KA: What has been your favorite Lafayette lacrosse moment thus far?

EN: I think beating Colgate, because that’s a team we’ve never beaten before, or at least no one on our team has beaten before. That sort of was a momentum change for our whole entire team, when we realized we can beat these teams that we haven’t beaten and do well this season.

KA: What’s it been like having your sister [Maddy Novick] as a teammate?

EN: I like it but also there are times when it’s really hard because we’re really competitive with each other. She plays defense so she defends me in practices, so sometimes we come at each other, but usually she makes me better. We try to minimize the arguing.

EN: During a timeout one time, I brought my stick with me to the timeout huddle, which is like a big no. It can change possession; they’ll give the other team the ball if they figure out that you’ve done that. So I brought my stick over the huddle and I got so nervous I just dropped it. Thank God no one saw; it would have been really bad.

KA: What’s on your pregame playlist?

EN: I like Waves, Often, the Kygo remix, Movements, sort of all over the place. Mostly Kristin Schaen’s playlist we play as a team in the team room and that pumps everyone up.

KA: One thing most people don’t know about you?

EN: I’m a blackbelt in karate.