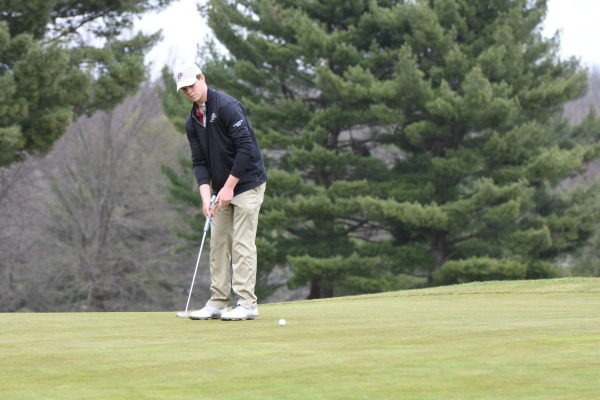 James Frahm putts at a tournament. (Courtesy of Athletic Communications)

The men’s golf season has come to a close, with Lafayette placing 6th at the Patriot League Championships at Bucknell University this past weekend.

Four members of the team finished in the top 25 spots at the championship tournament, including junior James Frahm and freshman Will Halamandaris tying for 21st. Senior Chad Bell and freshman Reid Bedell tied for 23rd.

“I don’t think we ever played to our full potential, but as a group we matured a lot this season,” said Bedell. “We’ve become more motivated, disciplined, and we’re going to keep moving on and improving.”

The team went into their season with hopes of winning a few tournaments. Unfortunately they fell short of this goal, but they remained optimistic and kept working hard to improve the team.

“The season has been a lot of fun,” Bedell said. “It was a big transition going from high school to college golf, but I got to know my teammates and learned a lot. We’re a good group of guys with a lot of potential, and I look forward to next season.”

Although the team did not finish each tournament as strongly as they had hoped, there were a few standout performances by individuals throughout the season. Bedell was the co-champion at the Navy Fall Classic, leading the team into seventh place. He also earned a top 10 finish at the Towson Spring Invitational, helping the team reach 14th place.

“In the fall, we shot the best score that our coach has seen from our school in 20 years,” said Bedell.

The team works year round to prepare for their golf seasons. They spend their offseason lifting two to three times a week as a team, and golfing at their own convenience. During the competitive season, the team golfs six days a week and organizes lifts on their own during the week.

“Everyone will play some golf over the break and play in some summer tournaments, so hopefully we’ll come in ready for the fall,” Bedell said.

The team is graduating just one senior this year, allowing them some continuity for next year. Although the team initially struggled to come together this year, they are more confident in their ability to perform as a team after a year of adjusting together.

“Next year we hope to come out on top at some tournaments and start winning,” Bedell said.