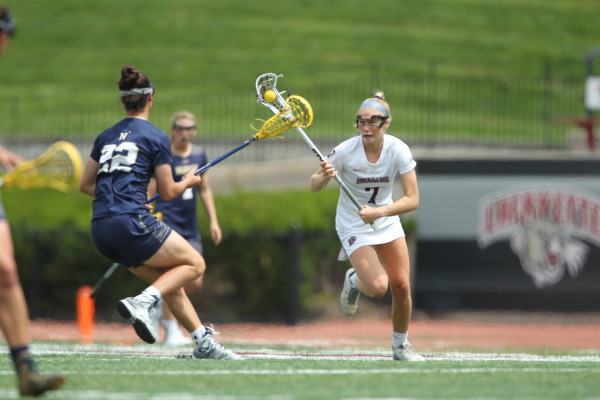 Despite their record-breaking start, the women’s lacrosse team’s season ended in disappointment after an opening round loss to Boston University in the Patriot League Tournament.

On Tuesday, the Leopards traveled to Boston to take on the Terriers in the first round of the conference tournament. Lafayette clinched the five seed after losing to Navy 24-10 at home on Saturday in the regular season finale.

Not much went right for the Leopards against the Midshipmen, as they saw themselves down 13-6 at halftime. The second half wasn’t any better, as Navy outscored them 11-4 en route to a 14-goal victory. Sophomore Jane Kirby and senior Kirsten Wilhelmsen each recorded a hat trick, as they led the offense for Lafayette. Sophomore Hannah Davey also added a pair of goals.

Following their loss to Navy, the Leopards’ first round matchup against Boston University was set for Tuesday in Boston.

The Terriers opened up the game with two straight goals, but the Leopards responded with a goal from senior Maggie Carver and two goals from Wilhelmsen to grab the 3-2 lead. Wilhelmsen, who was recently named the Patriot League Attacker of the Year, notched her 200th career goal with her first score of the game. Boston responded with two of their own, but another pair of goals by Wilhelmsen put the Leopards back in front 5-4. Boston ended the half on a 3-0 run, as the Leopards trailed at halftime 7-5.

Unfortunately for the Leopards, that momentum carried over to the second half. After freshman Emily Wingate scored to open the second frame, the Terriers rattled off five straight goals to push their lead to 12-6. Sophomore Emma Novick scored to end the run, and in doing so recorded her 100th career point. However, it was the last goal for the Leopards as they fell by a score of 14-7.

Junior Anna Raymond did well in the net, tying her career high with 16 saves on the afternoon. The game was the last for seniors Wilhelmsen, Carver, Amanda Case, Ashley Tedesco and Charlotte Rath.

Next year, the Leopards lose one of the most prolific goal scorers in the program’s history in Wilhelmsen. However, with Novick, Kirby, Davey and Raymond returning, the team has a lot of momentum going into next year where they look to build on their winning 2017 campaign.

Although the Leopards did not accomplish what they wanted in the second half of the season, they were still quite successful. Their final record of 10-8 was their best since 2002, and they finished the year with a winning record of 5-4 in the Patriot League.