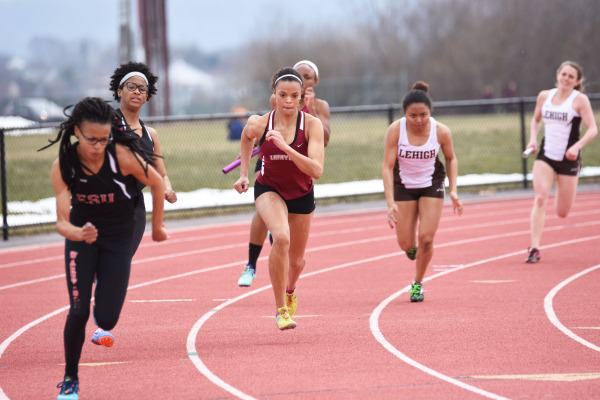 The Lafayette men and women’s track and field teams came out on top in four events overall at the Lehigh Games last Saturday at Lehigh University. They also competed in the Penn Relays while at the Goodman Track and Field Complex in Bethlehem.

Junior Dave McGriff put on yet another strong showing for the Leopards at the Penn Relays, placing fourth in the discus event, tossing a distance of 171’ 1’’. McGriff also participated in the shotput event, grabbing 38th place with a distance of 46’ 9.5’’.

To conclude the Penn Relays for the Leopards, the 4×400 relay group of seniors Kelly Reager and Tessa Broholm, freshman Crosby Spiess and sophomore Amy Hewlett notched 49th place overall in the event.

Lafayette was back in action on Saturday at the Lehigh Games, where several Leopards grabbed first place finishes. Senior Drew Davis had the strongest outing for Lafayette at the games, landing first place in a field of 44 runners in the 200m event with a time of 25.11. Davis also participated in the 4x100m event with sophomore Charlotte Gacek, Broholm and senior Mara Blanchard, grabbing a first place finish with a time of 48.24.

For the men at the Lehigh Games, junior Dave McGriff posted a season best discus toss coming in at 172’ 11 ¾’’, which was enough to award him first place in the event. Junior Steven Young also notched a top place finish in the long jump, clearing the bar at 22’ 7 ¾”.

Lafayette also grabbed a total of nine other top five finishes on the day with junior Michael Thorne placing second in the pole vaulting event, clearing at 14’ 5 ¼”. Junior Matt Beck placed third in the high jump and senior Marcus Vilme finished fifth in the triple jump.

In the 5000m event sophomore Mark DiPaola finished in fourth place with a time of 16:32:26. Senior Pat Corcoran picked up another fourth place finish, but in the hammer event with a distance of 179’ 3 1/2″.

As for the women at the games, junior Jennifer Salvatore competed in the 500m event and finished in fourth place notching a time of 19:25.50. Two other Leopards, juniors Morgan Nobles and Mikayla Pacilio, placed second and fourth in the steeplechase respectively, with Broholm bringing Lafayette’s afternoon to a close with third place in the 400m event.

The Leopards will return to competition this weekend as they compete in the Patriot League Championships set to begin Friday at 9:30 A.M. in Bethlehem.

Good reporting, all these years,Peyton! It looks like you are a Senior, this year. Happy Graduation and I hope that you have a wonderful future!