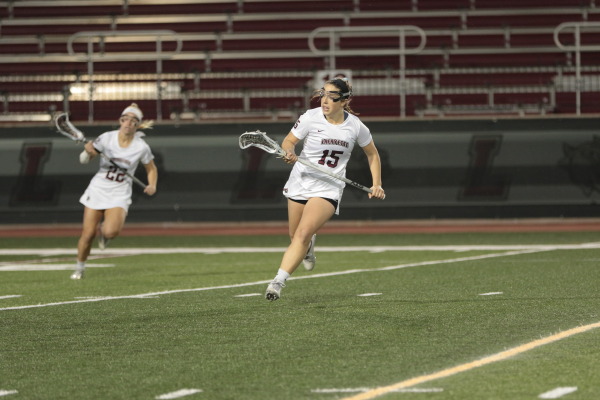 Jane Kirby ’19 in the open field (Courtesy of Athletic Communications).

After falling to Patriot League leading Loyola, the women’s lacrosse team’s seed in the conference tournament remains a big question heading into the last game of the season.

On April 22, the Leopards faced off against the number one team in the Patriot League – Loyola. The Greyhounds, who started the season 1-7 – largely a by-product of a tough schedule – have bounced back in a big way, going 8-0 in conference play.

The Leopards kept it close early, responding to an early 3-0 Loyola run by scoring two of their own. Still, the Leopards were not able to keep the Greyhounds’ offense in check as they went on an 8-1 run to expand their lead to eight. At halftime, the Leopards trailed by a score of 15-4.

In the second half, not much changed as Loyola opened on a 4-0 run to make it a 19-4 game. The Leopards scored four of the last five goals of the game, but ultimately fell to the Greyhounds by a score of 20-8.

Sophomore Jane Kirby led the Leopards offensively, as she netted yet another hat trick, while senior Kirsten Wilhelmsen added two goals of her own and an assist.

The high-powered Lafayette offense was kept under control, as they only managed 22 shots, while losing the draw battle 20-9. Of the 28 shots on goal by the Greyhounds, 20 of them found the back of the net.

The Leopards next game will be against Navy, and it will have huge playoff implications. With the Midshipmen already locked into the number two seed and a first round bye, the game means virtually nothing for them. On the Leopards’ side, a win could be the difference between a home or an away game in the first round of the Patriot League Tournament.

On the other side, if the Leopards lose then they will have to play on the road in the first round.

The Leopards will face Navy on April 29, where they will look to close out the season with a victory against the Midshipmen and clinch home-field advantage in the first round of the Patriot League Tournament.