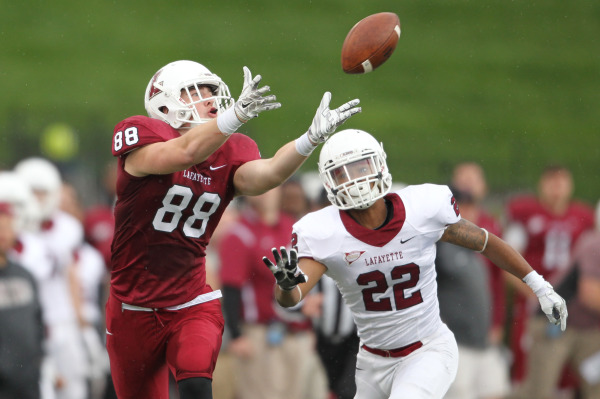 Lafayette football finished its spring season with an intra-squad scrimmage, with newly named head coach John Garrett making the calls for both teams. The game pitted “Lafayette” against the “Leopards,” as the game had implications for next season’s roster. It featured interceptions, long touchdown drives and a late comeback to make the game exciting.

The game began with a 13-play drive that ended with a touchdown pass from rising senior Josh Davis to rising junior Liam Reedy. The persistent drive of Garrett’s new offense was a product of the team’s hard work led by the new coaching staff.

“All spring, we had some ways to go, execution wise,” Davis said. “With that said, we stepped up pretty big. Coach [Rich] Bartel and Garrett have worked with us closely as far as dialing up the offense. There was a 15 practice spring and each day we tried to build and get better and that all culminated to the spring game and that first drive. We came out pretty hot.”

The first drive of the game inspired some high goals for the team in the coming fall season.

“Our first drive of the game was a 13 play drive for 70 yards, and I think it shows what our offense was capable of,” rising sophomore quarterback Blake Meyer said. “That was definitely one of the top moments of the game for sure.”

Besides the score, the drive featured a defense full of hustle and an offense capable of erasing setbacks.

“The opening drive definitely brings some excitement to the offensive side of the ball,” Davis said. “Even on the defensive side, there some big hits and guys were flying to the ball. That first drive was something we can take away and hang our hat on for the fall. We overcame two penalties on that drive and still scored, so that was an obstacle we were able to overcome.”

The defense shined in the game, as they came up with seven interceptions in total. One of the interceptions, a pick by rising senior TJ Jones, followed a touchdown pass from rising junior Mike Lewis to rising senior Rocco Palumbo to give the “Leopards” a shot at winning the game. Jones’ pick put the Leopards on the Lafayette two yard line. They trailed 14-10. Rising junior running back Tyler West delivered the go-ahead touchdown and the Leopards won, 17-14.

The scrimmage strengthened the fast-growing bond between coach Garrett and his players.

“It’s just the energy that he brings,” Meyer said. “The love for the game that he brings. His enthusiasm when we’re practicing is contagious and it gets everyone motivated to do their best. He’s a great coach. We all love him. Both him and Bartel. They run a different style of offense. At first it was tough to learn, because of the capacity of it all. It’s a very good offense and the more we go over it, the more we practice it, the better we’ll be able to run it.”

“Coach Garrett has been really hands-on,” Davis said. “Personally, I love his approach in working with us. Something really cool that he’s done is allow us to focus on the takeaways from this sport that go towards us becoming great men to our families. That stuff sticks with us.”

Garrett’s grasp of the game helps his players feel confident playing under him.

“It’s just the overall knowledge of the game that he has,” Meyer said. “A lot of our offense is similar to what teams at high levels run, which I think will make us more successful for this season. But his knowledge is definitely what shines through.”

With both quarterbacks who played in the 2016-2017 season graduating, the Leopards are set to explore depth at the position for next fall.

“They’ll definitely evaluate how this spring game went,” Davis said. “Drew Reed and Blake Searfoss are good buddies of mine, so I’ve had good mentors. Based on this spring game, they’ll evaluate that. I’d say the ultimate decision will probably come this fall when the freshmen come in and they can fully evaluate our guys.”

In the fall of 2017, coach John Garrett will conduct his inaugural season as head coach of Lafayette football. He will look to improve on the 2-9 record of last season, starting at Monmouth on Sept. 2.