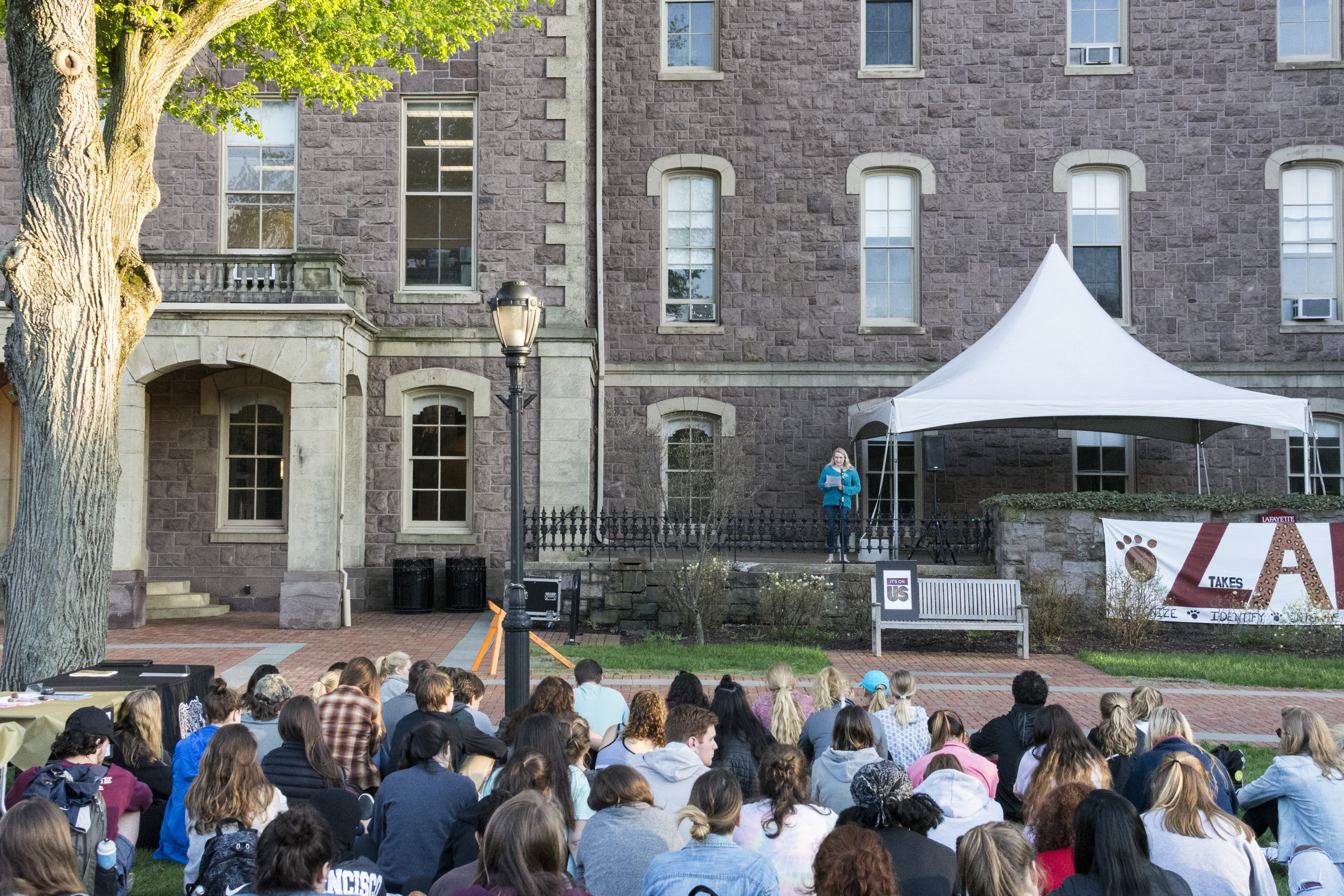 “I’m a rough, tough girl, but it didn’t matter the day after my 22nd birthday that I was tough enough, because when he slipped into my bed I was numb,” Stephanie Nickerson ‘17 said as she began to share her story for the first time to a crowd on the quad Wednesday evening.

Nickerson is a survivor of sexual assault and was one of many students who took to the patio of Pardee Hall for “It’s On Us: Takes a Stand” to share their experiences with the college community.

Nickerson said she was assaulted the summer before her senior year while studying abroad, just 48 hours before she was supposed to fly back to America.

For Nickerson, since she ended her trip soon after, she didn’t want to speak about it when she returned. She was able to find support, however, in friends and resources on campus, including Title IX Coordinator Amy O’Neill and the counseling center.

The open mic on the quad was the keynote event of sexual assault awareness week. Before students shared their stories, students could learn about the college’s resources in an hour-long information session on the quad.

Co-coordinator and survivor Nina Cotto ‘19 opened the event with a call for the college community to take a stand against sexual violence and the stigmas that come with it. She told her own experience, a story she only told publicly for the first time last semester.

“I have struggled with calling myself a sexual assault victim for more than a year now,” she said to the crowd. “The bruises and scars that I obtained that night of my sexual assault were not all physical but were mostly mental.”

Cotto’s assault occurred during her freshman year at Lafayette, and according to Cotto, her assailant was a friend who had helped her make her transition to college easier, at first.

Several other survivors followed Cotto with similar accounts of being sexually assaulted by someone they had known and considered a friend. However, others did not know who their assailant was before the assault occurred.

Alex McMillan ‘19, who was sexually assaulted last summer by a stranger, shared her story as well. While it has almost been a full year, according to McMillan, time itself is not helpful when it comes to sexual assault, and some days are still difficult.

While McMillan was one of several students who shared their stories, there were also students who read on behalf of other survivors and volunteers who read poems about sexual assault.

According to Cotto, the focus of this event was on empowerment through both the stories of sexual assault and healing, as well as the resources available to students on campus.

The resources advertised included Title IX, Athlete Ally, Public Safety, the counseling center, the women and gender studies department and the Crime Victims Council of the Lehigh Valley. Co-coordinator Reeve Lanigan ‘19 said she felt it was important for survivors to be able to see the connection among the various groups available to students, as well as where they can find support.

This event was in part inspired by the event this past fall, “It’s On Us Gets Personal,” where Cotto first shared her story. While at that event, Cotto said she could barely get through her speech because of her tears, this time was different.

“I just honestly feel happiness,” she said. “I was so overwhelmed with how many people were so invested in coming and so for one this is a really good step in my process, in my journey, being able to talk about it without being emotional.”

“I think it marks a turning point for me hopefully,” Cotto added.

Nickerson also said she felt the event provided her much needed closure and was beneficial in her healing process.

“I’m definitely glad I did it,” she said. “I think it was the final step for me to like finally accept that I’m a survivor of it.”

Sadly, as several of the speakers noted, this issue is prevalent on college campuses and exists at Lafayette.

However, Cotto considers the event and its turnout successful and  said she feels it was a way to start making conversation about possible solutions.

“I got a feeling that it was very much needed because everyone wants to have their voices heard,” she said.