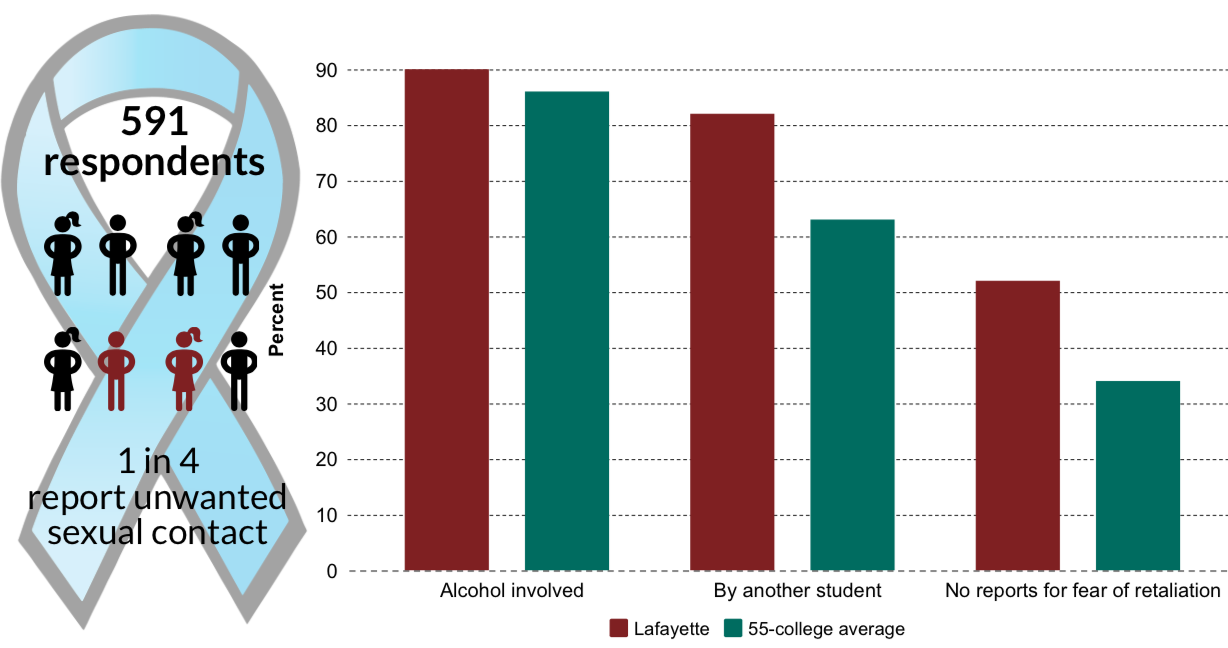 Nearly 600 students responded to a survey about sexual assault at the start of the semester. One in four of them reported unwanted sexual contact.

Four out of five of those students reported that the contact was from a fellow student. That places Lafayette above an average from 55 other schools in the country. For these schools, the average was three out of five.

The college distributed information this week about sexual assault derived from the Campus Climate Survey, but the results have caveats.

Coordinator of Gender and Sexuality Programs Cristina Usino, who was involved in creating the infographic, said she felt it was beneficial that students identified that there was a specified “fear of retaliation” from peers on campus.

“Naming the problem is the only way you can address it, so now we know that here on our campus it’s fear of retaliation, we get to name that now, and I’m really excited about the programming that can come from that now that we can name it,” Usino said.

While the survey states that 604 students began the survey, the numbers are only percentages of the 591 who consented to participate, and at times, only smaller subsets of that 591.

The Lafayette was not provided with the full results from the survey, which was administered by EverFi Inc.

According to Vice President of Campus Life Annette Diorio, not all students answered all questions in the survey. Aside from uncompleted surveys, depending on how a student answered a question, they were directed to other subsequent questions, leading to a smaller overall pool.

“For example where it says 90 percent of students were drinking before an assault, that is only asked to the students who said that they believe they assaulted someone or that they were assaulted so it’s a subset of the 591,” Diorio said.

These smaller surveying pools lead to some questioning over the representative nature of the data from both Diorio and Usino.

“I think overall it was difficult to pull data out because the response rate for each question was different, so that was a really hard thing to make sure we were providing accurate data,” Usino said.

All of these students who formally reported a sexual assault to the college said they feel supported by the institution, which is over 60 percentage points higher than average. Sixty percent of students also believed the college would take their report seriously.

However, not all students choose to formally report. Eighty-six percent of those who chose not to report responding to the survey saying they felt what happened to them wasn’t serious enough to talk about.

According to Diorio, these data are not meant to serve as a representation for the entire college, but for a look into the experiences of students.

“This was not a response rate that I would say I would feel really comfortable generalizing these data, saying, ‘Oh well, this is true for all students,’” she said.

Diorio also said she thinks these statistics are not quite representative, because they are not presented with comparable statistics. According to Diorio, Lafayette does not know the sizes or situations of the other 55 schools to which it is being compared.

“For students who are saying that they are reporting a higher fear of retaliation, we enroll about 2,400 students, and for an institution who enrolls 30,000 they may feel a little less subject to that type of thing,” she said.

Aside from the imperfect comparisons, other concerns stood out to Usino, such as the lack of diversity represented in the results. Roughly 80 percent of respondents were women, and another 80 percent were white.

“I didn’t feel like it was representative of students of color, and so that was something I was struggling with,” Usino said. “It was a heavily female respondence, and so again I really wish we would have had more gender diversity and racial and ethnic diversity.”

However, this underreporting from women of color presented a more concerning statistic to Usino that relates to a national trend.

“I’m really interested in women of color, specifically, because we know nationally the stats on women of color not reporting are eerie,” she said. “And then if our survey doesn’t represent them, that’s a little too close to that national statistics so that’s something also that’s not a statistic in here, but it showed me that they weren’t represented.”

While these results created concern for Usino, they also pointed to areas of improvement for education and prevention programs. According to Usino, this will involve more direct contact with student organizations.

Horrifying. I hope no one doubts the necessity of events like the sexual assault open mic again. There’s definitely a culture of silence at Lafayette.