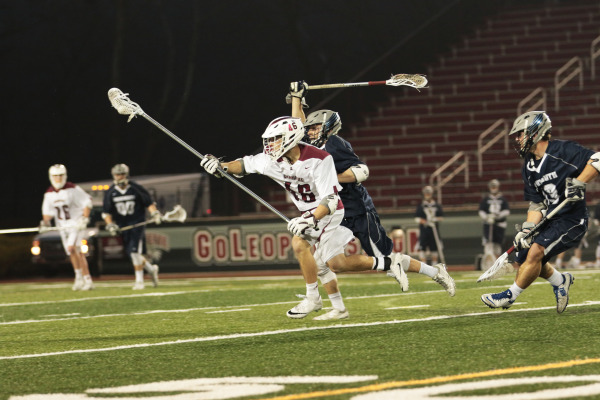 Chris Adamo ’20 runs with the ball. (Courtesy of Athletic Communications)

After a shoddy 2017 campaign, the men’s lacrosse team has their sights set on the future.

The Leopards’ season came to an end last weekend at Colgate, falling to the Raiders by a score of 11-6. Lafayette ended their season with an overall record of 2-12 and a record of 1-7 in the Patriot League.

Against Colgate, sophomore goalkeeper Jonathon Anastos made a career-high 19 saves and senior Kevin Lewis recorded a hat trick in his final contest as a Leopard. Despite getting out to a 2-1 lead, Lafayette surrendered a seven-goal run to fall behind 8-2 at the half. Two goals by sophomore Conor Walters and one goal by sophomore Connar Dehnert were not enough as the Leopards were unable to recover from the deficit.

“We’re definitely disappointed with how things went with the overall record and how we finished in the Patriot League,” said junior Scott McAvoy, who was sidelined with a knee injury early in the season. “But it kind of serves as motivation, especially with how we went out at Colgate. I know we’re all kind of ready to go for next season.”

The Leopards will need to replace their starting attack. Lewis, who tabbed 15 goals and seven assists on the season to total 22 points on the year, and senior Eric Joseph, who had 14 goals and seven assists to total 21 points, will both graduate this May. They will also lose senior Jason Sands, who had five goals and eight assists for 13 points, as well as seniors Erik Cannon, Dillion Confalone, Matt Cortese, Declan McGuire, Keegan Hickey, Gerard Mahoney and Charles McCooe, all of whom contributed significantly throughout their four years.

But the Leopards will return Anastos, who ended his sophomore campaign on a high note, recording career-highs in saves in his final two games, and a number of underclassmen with considerable experience.

Offensively, Lafayette will retain their leading scorer, sophomore Conor Walters. Walters had 19 goals and six assists on the year. Denhert will also return, following a sophomore season in which he scored eight goals and eight assists, as well as junior Will McCarthy, who totaled seven goals and eight assists in his junior year. McAvoy said he hopes to be healthy and return to the field as an offensive threat for his senior season, having scored 11 goals and adding two assists in only six games.

“It’ll be a senior and junior heavy team, with some really good sophomore players who contributed as freshmen. I think we have some depth and just have to put it all together,” McAvoy said. “We have this attitude where we’re going to do whatever it takes to be competitive again.”