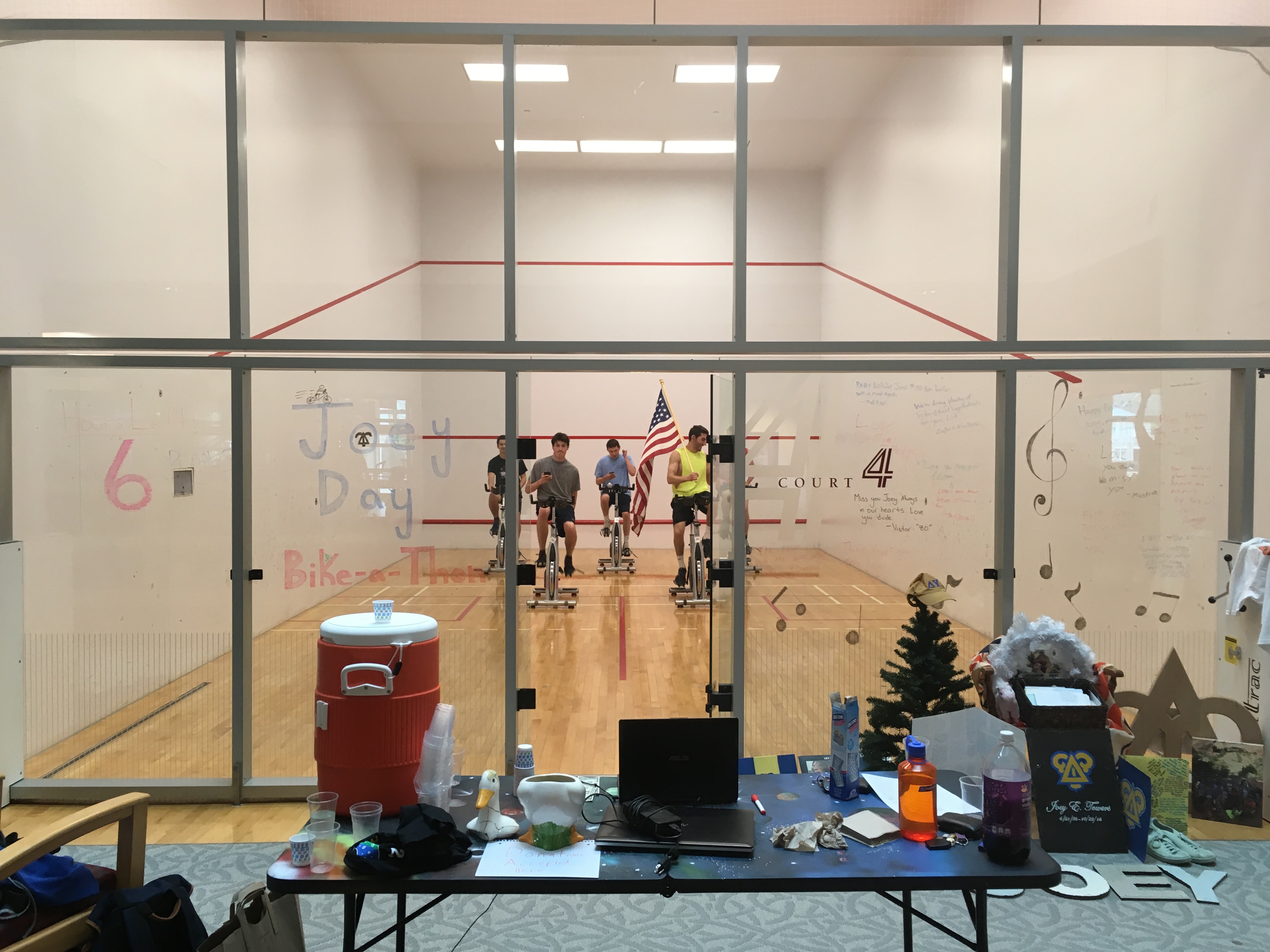 The brothers of DU biked to raise money for the Movember fund. (Courtesy of Josh Kramer ’19).

April 21 would have been Joey Towers’ 21st birthday. To celebrate his life, the brothers of Lafayette’s Delta Upsilon created the first annual Joey Day to raise money for suicide awareness.

Thirty-five to 45 DU brothers, five DU alumni and 10 non-fraternity members who were close with Towers alternated shifts to bike for nine hours straight. They rode stationary bikes in one of the racquetball courts of Kirby.

Towers ’18 took his own life last October. He was a mechanical engineering major, a Marquis Scholar and a brother of the Delta Upsilon fraternity.

The idea for Joey Day came from the DU executive board, which decided it would be “the best way to honor Joey’s memory,” as he really enjoyed biking, Philanthropy Chair for DU Josh Kramer ’19 said.

Every DU brother on campus was required to bike for at least half an hour, and beyond that, they could sign up for time slots.

Alec Cohen ’18, the brother who organized the event, said however “people were coming in and out and switching up times, as well as people who did not sign up participated.”

For the first three hours of the bike-a-thon there were five bikes in use at once. By the peak of the day, there were six bikes going, racking up the miles. Each mile was sponsored, and this helped the men of DU to succeed in their fundraising.

Kramer said that they raised $8,340, well above their intended goal of $5,000. All the money is going toward The Movember Foundation, a men’s health organization that works for suicide prevention.

“Since this was the first attempt at this fundraiser, I was expecting us to have a lot of trouble with setup, donations and participation,” Cohen said. “However, none of this was a problem. The setup went smoothly, we had so much participation that it was even hard to get a spot on a bike at times, and the fundraising was so successful that we even had to add another bike.”

Kramer added that people rode for anywhere between a half-hour to upwards of two hours. When someone got tired or had to leave, someone else would replace him on the bike. All in all, there were guys continuously riding bikes from 10 a.m. to 7 p.m., bringing Joey Day to a close after a full nine hours of bike riding.

“We can’t thank the school community enough as well as the outside community for helping us reach our goal,” Kramer said.