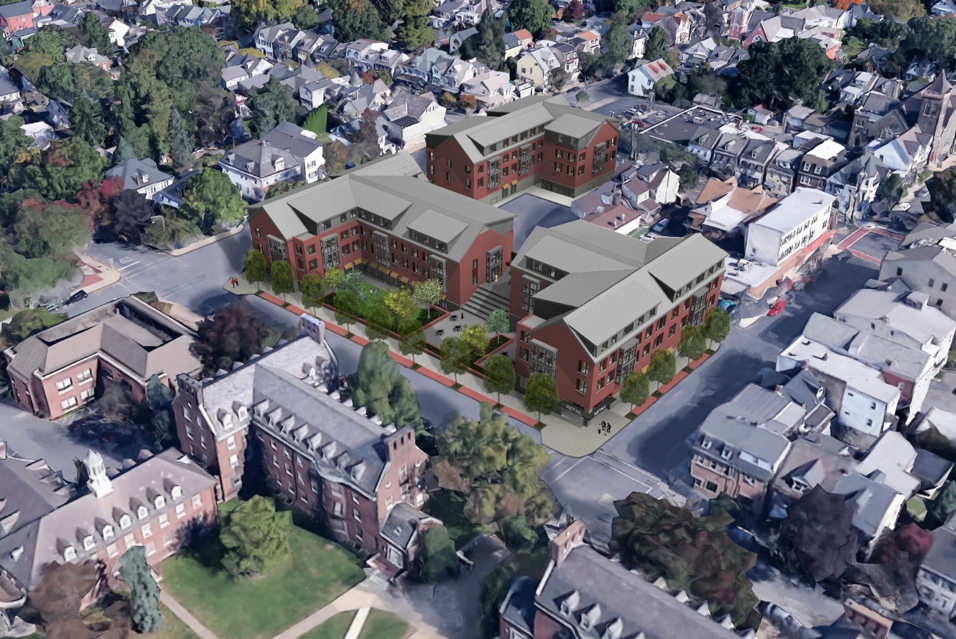 After several months of neighborhood pushback, the Easton City Council has approved Lafayette’s plans to build new dormitories on McCartney Street. The council voted four to two in favor of the zoning amendments needed for the plans.

The college asked the city council to allow it to build 55-foot “mixed use” dormitories on McCartney Street. A diner and bookstore will be on the first floor with three floors of suite-style dormitories on top. Lafayette’s new properties will also be able to cover 85 percent of the lot, a change from the previous 50 percent.

At the meeting, several community members voiced their concerns about the college stretching their campus edge into the neighborhood. Each implored the council to strike down the zoning amendments.

Easton residents questioned why the college needed to build their dorms beyond the current campus edge on McCartney Street. President Alison Byerly said that this plan was designed in such a way that it could not take place anywhere else.

“This project represents a desire to connect better to the community,” she said.

She said to the council and the community that even with a rejection of the zoning proposal, the college’s relationship with the community would not suffer.

“If vote did not go our way, our relationship with the city transcends any individual decision,” she said. “We don’t intend to hold the city hostage on this or any other matter.”

Mayor Sal Panto had doubts about that claim.

If the city were to reject Lafayette’s plans, he said, the college could decide to apply for tax exemption and avoid paying Easton tax money in the future. The college would be paying an additional $230,000 a year in real estate taxes with the new dormitories, according to the council’s data.

“The college has been very cordial,” he said. “But Dr. Byerly can say anything she wants here. She answers to a board of trustees. They’re business people that make business decisions. They direct the future of the college.”

City Council member Peter Melan said in a presentation at the meeting that without the college’s expansion, the city could lose about $2.3 million in real estate tax revenue over the next ten years if the college got the exemption.

On top of that, Melan added, by rejecting the plans the city could damage its relationship with college, despite Byerly’s assurances otherwise.

Panto said that in approving the amendments, his decision was “for the long term, not the political term.” For him and three other members of the council, the city benefitted from its biggest taxpayers’ expansion in a way that couldn’t be ignored.

If Lafayette paid more taxes, the city could keep rates low in the future.

The council also noted the favorable aspects of having the college so integrated into College Hill. These benefits included even more service hours devoted to the community and 20 to 30 new retail jobs in the college’s planned diner and bookstore.

Lafayette professor and longtime city planner Paul Felder said he was disappointed by the vote of the council and said the college is going to change the character of its neighboring historic village in a way it doesn’t seem to understand.

“By increasing the impervious coverage to 85 percent and increasing the allowable height of a building to 55 feet, we are more than doubling the size of buildings that can be built [on McCartney St.],” said Felder, pointing out the dramatic difference from the current setup of small single-family homes.

Panto repeatedly mentioned the shabbiness of the college-owned housing on McCartney St. as a reason to replace them with better looking buildings. Melan talked about how the new buildings would be much safer than the current older homes and include updated fire safety technology.

Felder said that it was the college itself which let the homes get rundown, and if the homes were revitalized they would look much better than they do now.

While the college revitalizes McCartney Street with their new dorms, Panto said, the city will work to improve the homes on Cattell Street.

Despite Panto’s confidence, Byerly’s reassurance, and the college’s transparency over the course of the process, community concerns persevere.

Future expansion and demolition remain on residents’ minds as the college continues to buy homes on College Hill, which the college says is chiefly for faculty and staff rentals and housing.

Robert Sun is the head of the Easton Planning Commission which voted not to recommend the zoning amendments for approval. He said that it seems to him the college is buying up houses strategically in a way that isn’t necessary for faculty rentals.

“If [faculty housing] was the sole intent, these purchases would be scattered throughout the neighborhood,” he said.

After the vote in the college’s favor, Byerly said the college would continue to listen to neighborhood concerns in the future.

“It’s not surprising that a project of this size would create concern,” Byerly said. “It’s a big change for the neighborhood. Change is always difficult but we’ve worked very closely with the community to try and address specifics about the building design. We feel very pleased with how the design’s turned out. We’re appreciative that the city council also agrees that this project will be positive for Easton.”

“We will always be good partners to the community and the city,” she added.

Lafayette professor and city council member Roger Ruggles recused himself from the vote, because he is an employee of the college.