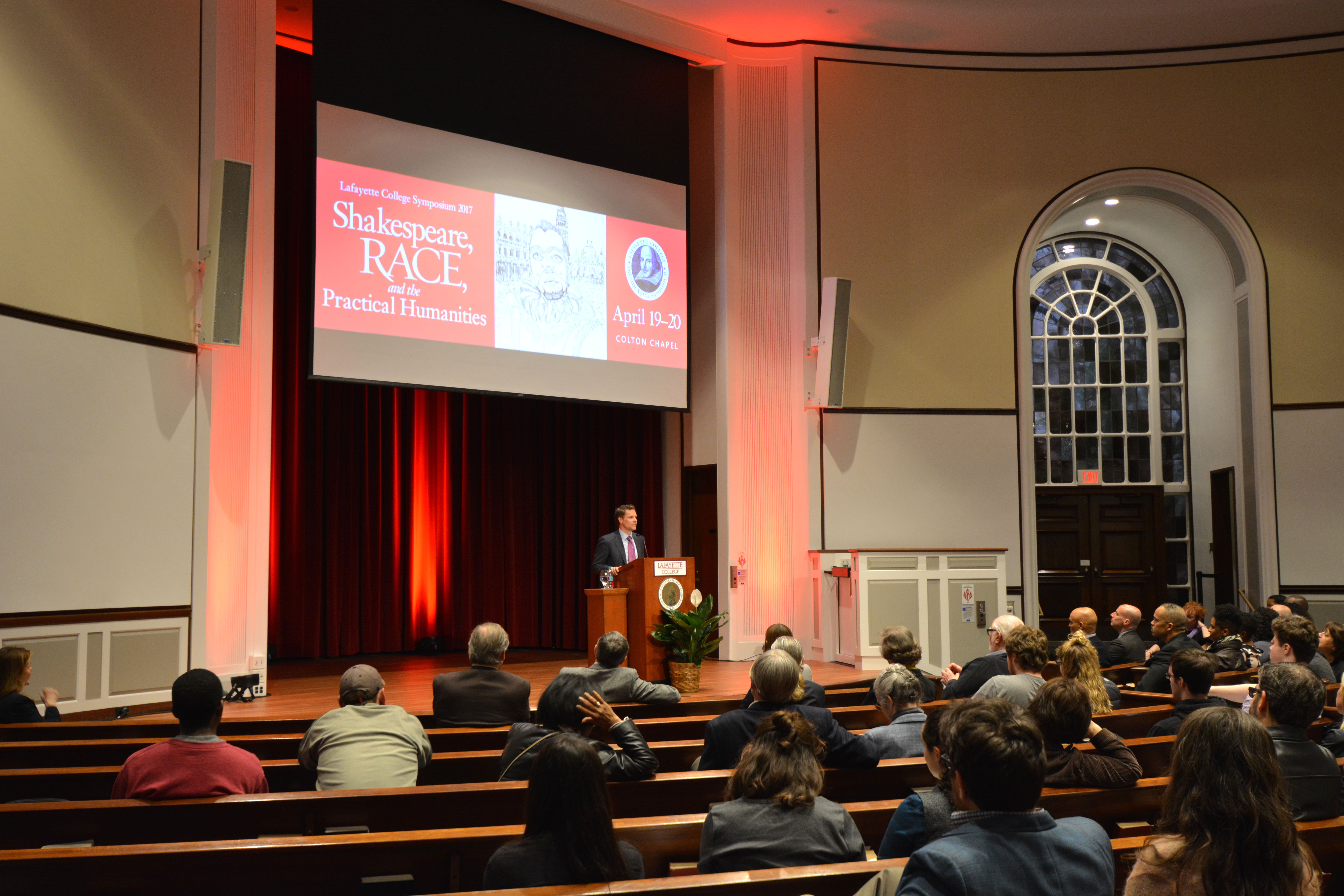 The two-day 2017 Presidential Symposium concentrates on Shakespeare and the presence of race in his work (Photo by Courtney deVita ’19).

This week, the college welcomed esteemed scholars to discuss William Shakespeare’s work in the context of race, identity and the importance of the humanities.

The idea for the two-day symposium, funded by the president’s office and entitled “Shakespeare, Race, and the Practical Humanities,” was spearheaded by English professor Ian Smith and Director for Special Collections and College Archives Diane Shaw.

“This is really a national conference that is occurring, and I think, a real opportunity for the campus community,” Shaw said.

Shaw noted that the distinguished symposium expected students and faculty from nearby institutions in addition to members of the college community.

Smith, whose scholarship in early modern race studies focuses on Shakespeare, saw the symposium as an integral part of discussions of inclusion and diversity at the college.

He said that students are often surprised to learn that Shakespeare discusses race. The symposium was aimed at dismantling those assumptions and framing Shakespeare’s work through a uniquely contemporary lens.

Smith views Shakespeare and the humanities as a whole, as deeply relevant to understanding the world we live in.

“Race is the modern American issue that we still need to struggle with,” Smith said. “Our country has that as part of its history, and I think it’s important, for us to think about our future, then we have to think about that past and the legacy of that past and the extent to which it means something or manifests itself today in modern society or modern culture.”

The speakers were diverse in the topics they addressed. Actor and playwright Keith Hamilton Cobb kicked off the symposium Wednesday afternoon with a discussion titled “The Thing is the Thing: Playing and Not Playing Shakespeare.” Cobb spoke on his experiences as a black actor in productions of Shakespeare’s work.

Director of the Folger Shakespeare Library Michael Witmore, an author of various books on topics concerned with Shakespeare, then gave the opening lecture Wednesday evening titled “Is it Practical to Talk About Shakespeare and Race?”

According to Smith, events like the Presidential Symposium serve as a tool that institutions can use to shape discussion on campus.

“The focal point for me was to think about ways in which we could talk about – not just humanities – but also…the ways in which our commitment to diversity and inclusion could continue to be a part of this serious conversations on this campus,” Smith said.

The answer, for Smith, lies in the curriculum students are taught.

“So I thought that if there was going to be any areas of real structural change of how we promote diversity and inclusion then we want to do it from the curriculum,” he said. “This symposium was, for me, one way of thinking of that and getting that particular conversation started to underscore its significance for our community.”

Wait, I’m confused. Was the symposium about literary Shakespeare or theatrical Shakespeare? It looks like the speakers are mainly actors, but the initiative was spearheaded by the English department? Seems like a bit of a missed opportunity for co-hosting.