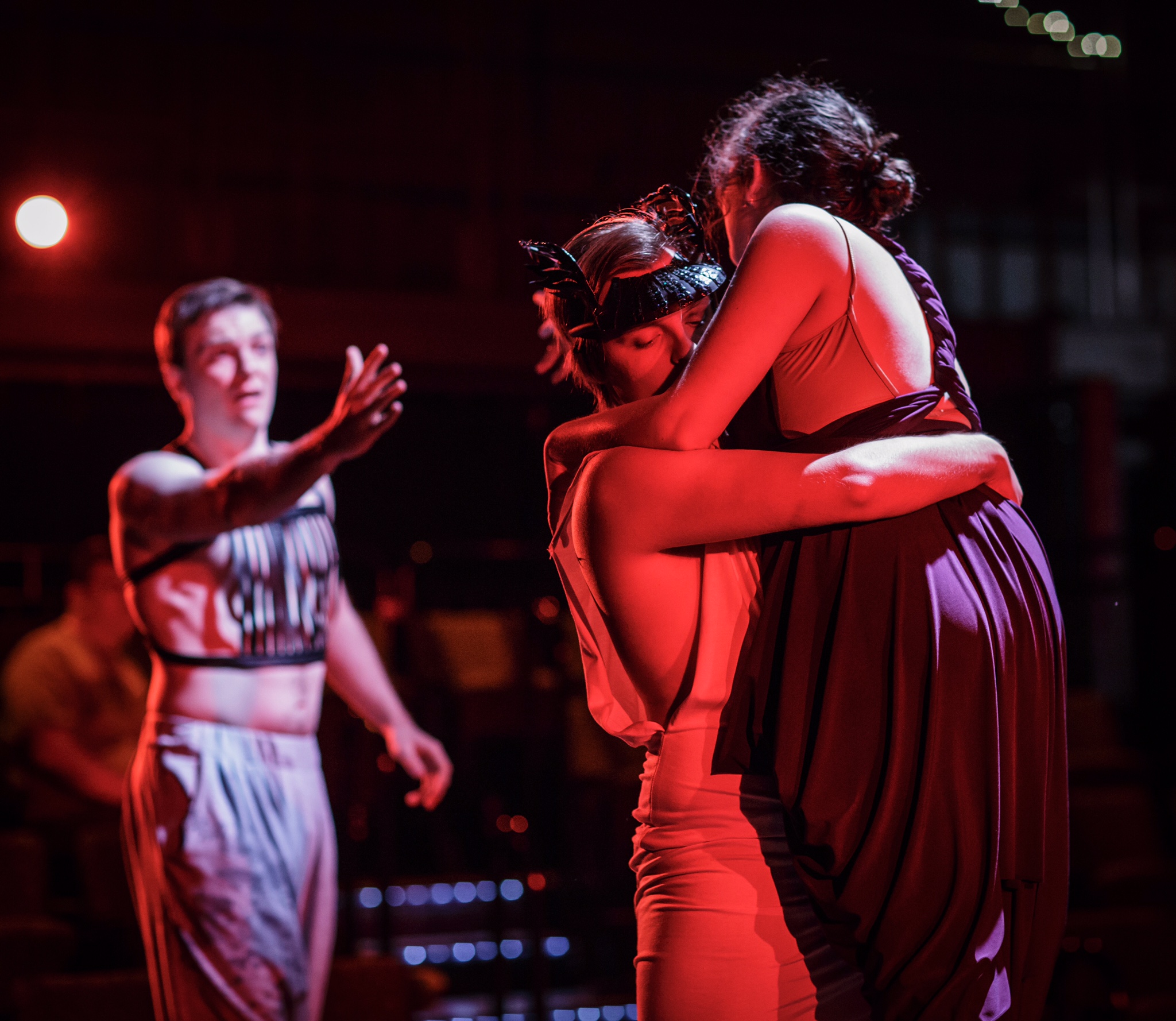 (Photo by Will Cohea) A scene during a rehearsal of ‘Metamorphoses.’

The classics are coming to life this week at Lafayette.

Lafayette College’s theater department presents Mary Zimmerman’s “Metamorphoses,” an adaption of Ovid’s classic from the year 8 A.D. After opening night on Thursday, shows will be Friday and Saturday, along with April 27-29.

Zimmerman’s play, which was nominated for three Tony Awards in 2002, is ten scenes and tells the stories of several myths updated for modern audiences. Theater professor Suzanne Westfall, who directed the play, said that “Metamorphoses” has a bit of tragedy and comedy.

For example, the myth of Apollo’s son, Phaeton, who begs his father to let him drive his sun-carrying chariot and nearly destroys Earth, is told with an up-to-date humorous flair. Phaeton is shown in a therapy session wearing sunglasses and drinking a Pabst Blue Ribbon.

Just like Ovid’s classic of more than 250 myths, all of the stories in the play are about change. But Westfall said she hopes the play also helps the audience understand why myths are so important.

“We’re still certainly recycling mythic patterns,” she said. “All of our really important deep psychological art—like I keep saying, ‘Star Wars’—is myth. It’s got its own mythological system. They all do.”

Westfall added that the t-shirts designed for cast and crew members have a quote from the play on them that speaks to the importance and explanatory value of myths. It’s from the part of the show when Phaeton’s therapist says that “myths are the earliest forms of science.”

In addition to directing, Westfall co-taught a class that looked in depth at “Metamorphoses” and Greek mythology with classics professor Markus Dubischar. Members of the class also participate in different parts of the play.

The class read and discussed part of Ovid’s “Metamorphoses,” compared it to Zimmerman, and looked at different ways myths appear in different areas of life.

For the myth of Narcissus, for example, Dubischar said the class looked at the psychological definition of narcissism from the “Diagnostic and Statistical Manual of Mental Disorders.” Then, they discussed whether Narcissus met this definition based on Ovid’s characterization of him.

Narcissus, who falls in love with his own reflection in the water, leading to his death, “scored pretty high” on the DSM’s classification, Dubischar said.

For Dubischar, perhaps one of the most important parts of the play’s production is the pool on stage.

On top of that, Dubischar said the water creates a kind of other-worldly atmosphere to the play.

This works well with myths, he said, because myths tend to inhabit a world of their own.

Westfall said one of the most challenging parts of the play was getting the cast to embrace this dreamlike quality.

“Initially it was getting people to let go of realism,” she said, “to go into a dream world, and to do a dream play in a dream fashion.”

In her 36 years at Lafayette, Westfall said this was the best group of students she has ever had because of their ability to be open to this dream world.

At the very least, I’d like to know the names of the students involved. Nevertheless, refreshing to see a nuanced and well-researched take on a piece of theater from the Lafayette. Please stay another year, Will.