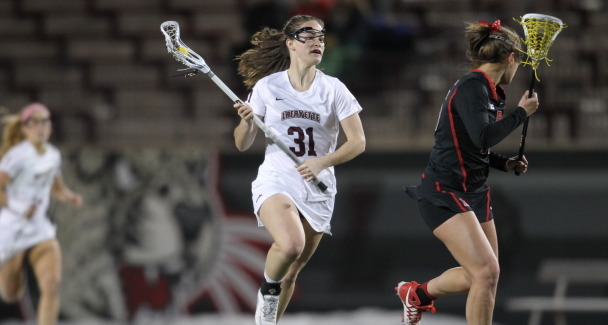 For the first time since 2013, the women’s lacrosse team will be heading to the Patriot League Tournament.

With their win over Holy Cross on April 15, the Leopards have secured a spot in the conference tournament for the first time in four years.

This past Saturday, the Leopards took on the Crusaders in a match at Fisher Field. Although the game was evenly played through the first frame, the Leopards held a 9-6 lead at halftime. The Crusaders were never able to come back from that point on, as Lafayette held on for a 21-15 victory over Holy Cross to move to 10-4 on the season.

Offensively the Leopards put on a show, totaling 44 shots with 32 of them being on net. Senior Kirsten Wilhelmsen and sophomore Jane Kirby each had six goals apiece to lead the Leopards. Junior Emma Novick also contributed four goals of her own. Wilhelmsen’s performance was good enough for her to win her fifth Patriot League Attacker of the Week award this season.

Although the win guaranteed them a spot in the Patriot League Tournament, the women’s lacrosse team still has a lot to play for. Currently the Leopards sit in third place in the conference standings. The top two teams at the end of the season will clinch a bye in the first round, while the third and fourth seeded teams will host the quarterfinal matches.

On Wednesday, the Leopards took on the rival Lehigh Mountain Hawks in a game that had major implications on the Patriot League standings.

The Leopards started off slow, finding themselves in a 15-5 hole at halftime against the Mountain Hawks. Although the Leopards were struggling, there was some good news as sophomore Jane Kirby scored towards the end of the half for her 50th goal of the season. With that goal, she joined Wilhelmsen as the only Leopards to score 50 goals this year – only the second time in school history that two players have scored 50 or more in a season.

Although the Leopards outscored Lehigh in the second half, it wasn’t nearly enough as they fell to the Mountain Hawks by a score of 20-11. Kirby led the way in scoring, netting four goals in the game.

With the loss, the Leopards sit in a three-way tie for the third seed with Lehigh and Bucknell, with Lafayette holding the tie-breaker over Bucknell, but not over Lehigh. The last couple of games from all teams will decide Lafayette’s fate in the Patriot League Tournament.

Next up for the Leopards is Loyola, who is currently undefeated in Patriot League play. The Leopards will travel to Baltimore on Saturday to take on the Greyhounds in a pivotal conference match-up.