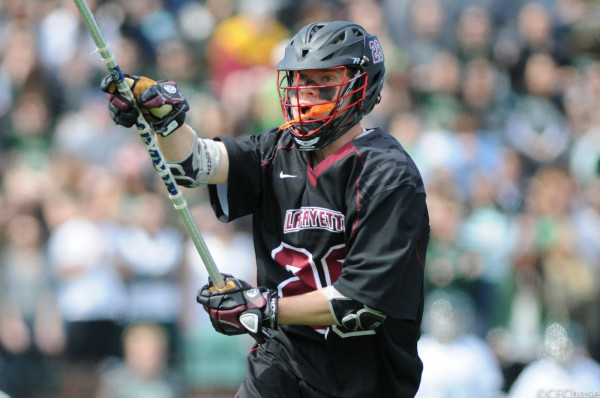 Erik Cannon ’17 makes a play with the ball. (Courtesy of Athletic Communications)

Katelyn Arnold: So you just celebrated your Senior Day against Holy Cross this past weekend, and for the past three years you’ve watched your older teammates being honored. So what was it like to be one of the ones out on the field being recognized?

Erik Cannon: It makes me feel old. It’s hard to believe that this day has come already. My parents have always told me that it goes fast and to make sure I have fun, but this day really came a lot quicker that I thought it would. But it feels good to be moving on to the next phase of life.

KA: What has the last four years as a member of the Lafayette lacrosse team meant to you?

KA: Is there anything you’re hoping to accomplish with the games you have remaining?

EC: Just keep on having as much fun as we possibly can. I think that is why everyone plays lacrosse in college, and I think that’s something we can’t lose sight of even though we’re 1-10 right now.

KA: Tell me a bit about the team you have this year and how you have developed as a group throughout the season.

EC: We have a bunch of unique personalities on the team, myself included, but we’re a really tight-knit group, and we do everything together. I think our camaraderie is a lot better than it’s been in the past, even though it hasn’t shown on the field throughout the season. It’s been a pleasure to be a part of this group.

KA: What would you say has been your favorite moment of your four years of Lafayette lacrosse?

EC: Beating Navy this past season. I have a bunch of friends on the team, and they’re really taken it to us the past three years and I’ve heard all about it, so I’m going to be giving them a taste of their own medicine when I see them over the summer.

KA: Who has been your favorite team to play?

EC: The service academies. They’re physical specimens, and it’s really hard to match up with them athletically, but we’ve had a bunch of close games with them, and I think beating Navy this year just shows how far we’ve come as a program.

KA: Favorite field on the road?

EC: I think the Navy complex is just unbelievable. We get more than the people we get at our games. We get like a couple thousand fans compared to parents and girlfriends at our games.

EC: My sophomore year we played NJIT and they were a first year program that year. For the first time in my career, someone made me fall. I thought that was especially embarrassing against kids that didn’t have any experience in Division I, and its something that still haunts me to this day.

KA: Lets learn a bit about your fellow seniors… Which senior would you pick to be with you on a stranded island?

EC: I think Matt Cortese, because he has the intangibles. I think if I was out of food and had nothing to eat, he’s the person I would want to eat first out of all the other seniors.

KA: Which senior is the most likely to show up late to graduation?

EC: I think Gerard Mahoney would be because I keep him in line throughout the season, making sure he’s not late to anything. And there’s a chance I’m late. So if I’m late, he’ll be late.

KA: Which senior would you most want to represent you as your lawyer?

EC: Jason Sands. Even when he has no idea what he’s talking about, he always manages to win those kinds of arguments.

KA: Is a hot dog a sandwich?

EC: I would classify it as a sandwich, because its meat inside of buns, and I think that is the definition of a sandwich.

KA: One piece of advice you would leave with the underclassmen?