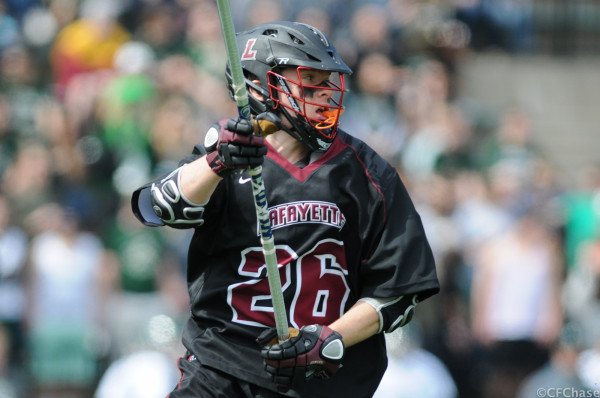 Erik Cannon ’17 running with the ball. (Courtesy of Athletic Communications)

The men’s lacrosse team’s seniors were honored on Saturday, but they were unable to secure a victorious send off.

It was a two goal game heading into the final quarter, but it was all Holy Cross from there. They took the victory 10-5.

The defense stood out for Lafayette in this game, and communication is key for the team to convert their performances into wins.

“It all starts with consistent communication between goalie and defense,” Cortese said. “We instill a game plan at the beginning of the week before a game, and whether that be through film or a chalk talk, we openly discuss how to approach the opponent’s offense, what our game plan is for the opponent’s offense and how we are going to execute it. Come game time, even when we let up a couple of goals and things start to go their way, we take a step back and look at the basics and evaluate our game plan, so in the next possession we can get a stop.”

Cortese held Holy Cross to 10 goals, despite their 42 shots.

“Matt played excellent,” Joseph said. “He made all the stops, and more, than we expected him to make. Defensively, they were communicating well and sliding well and being very physical. That was able to disrupt Holy Cross’s offense for the majority of the game.”

Despite the loss, senior day was still a treasured occasion for the team members.

“Senior Day is always special,” Joseph said. “It’s always nice to get your parents out on the field. The game didn’t result in a win, but all the guys were happy to have their family. Some guys had their family come in from across the country, like California and Chicago.”

Cortese, who missed a portion of the season, also said senior day was a meaningful experience.

“To perform well that day and honoring the seniors specifically meant a lot to this senior class, given that we were coach Rogalski’s first recruiting class,” Cortese said. “Also, Coach has instilled a higher expectation of upholding the culture of the program. So going out there to perform last Saturday meant that regardless of the score, we were always going to uphold those values.”

The game came down to the final quarter, but Lafayette couldn’t complete a comeback.

Lafayette went into their next game knowing that they were capable of earning the win.

“The biggest thing that we need to do to get wins on Saturdays is to change our outlook on the game,” Cortese said. “Coach Terranova compared our game plan to baseball as a means to hitting singles instead of home runs. So taking everything play-by-play and letting the game ride out will be more effective than swinging for the fences and changing the game with one play.”

They did win their next game, 12-11, over New Jersey Institute of Technology at home with Walters and Joseph scoring three goals apiece. Cortese picked up his first win of the season in the tilt. The Leopards are still alive in playoff contention, with two more Patriot League games to go.

“I think of it as ‘you’ve been there before and can understand the pressure of the situation,’” Cortese. said “So you address that and handle it appropriately before game time. Our playoff hopes are definitely still not out of reach. We still have two more Patriot League games that are both winnable. If we win both, we leave an opportunity to clinch playoff berth. We can overcome that easily through hard work and sticking to our system.”

“If we get that opportunity to play, the awesome thing about the tournament is that anyone can beat anyone,” Joseph said. “You just have to believe. Me being a veteran on the team, one of the biggest things I can do for the younger guys is instill belief and thinking that we have the chance to win any game that we go into.”

The Leopards will host Bucknell on Saturday as the season starts coming to a close.