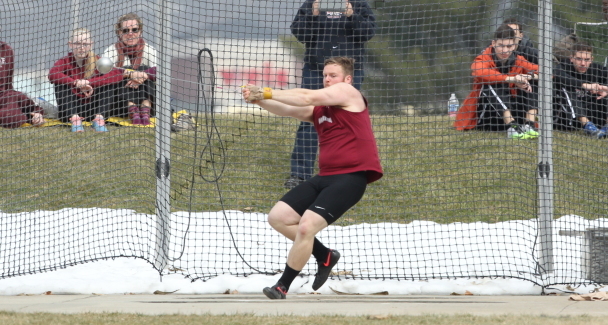 For the second time this season, the Leopards took on rival Lehigh in a dual meet. But this time the events were outdoors.

Although the Leopards didn’t win, with the men losing 114-89 and the women losing 132-71, they still finished first in 11 events on Saturday afternoon and set several personal records.

On the men’s side, it was freshman Justin Johnson who stole the show for the Leopards. Johnson finished first in the 100m and 200m events, posting times of 10.89 and 22.01, respectively. Both times were personal records for the freshman standout.

Johnson, however, was not done there as he anchored the 4x100m relay team. Johnson along with freshman Dan Hogan, sophomore Tom Strand and junior Steven Young finished first in the event. In the 4x400m relay, Johnson served as the second leg and won the event with Strand, Hogan and junior Kia Shahideh running with him.

As for the field athletes, junior Michael Thorne cleared 15′ 5″ in the pole vault – good enough for sixth in the college’s history. Junior Dave McGriff had the best discus throw at 171′ 8, which was the fourth best in Lafayette history. In the hammer throw, senior Patrick Corcoran, McGriff and junior Dan Switzer swept the top three over the Mountain Hawks.

On the women’s side, senior Drew Davis had yet again another top ten finish in school history. The standout sprinter recorded a 25.03 in the 200m, a personal record that was good enough for the fourth fastest time in Lafayette history. She then went on to win the 400m with a time of 57.67 – another top ten finish in school history. Davis now holds the second, third and ninth spot in that category.

Davis wasn’t done there, as she served as the first leg in the 4x100m relay. Her, freshmen Crosby Spiess and Katie Mozzochi and senior Mara Blanchard finished first in the event over the Mountain Hawks.

Senior Tessa Broholm also had a strong performance in the meet, running a 1:03.39 in the 400m hurdles. The time was a personal record of hers and secured her place in the record books with the sixth fastest time in school history.

Despite not winning the dual meet, there was a lot for the team to be happy about with the abundance of record setting performances in the meet.

Next for the team is a trip to the Greyhound Invitational in Bethlehem on Friday morning and then the Bison Open in Lewisburg, Pa. on Saturday.