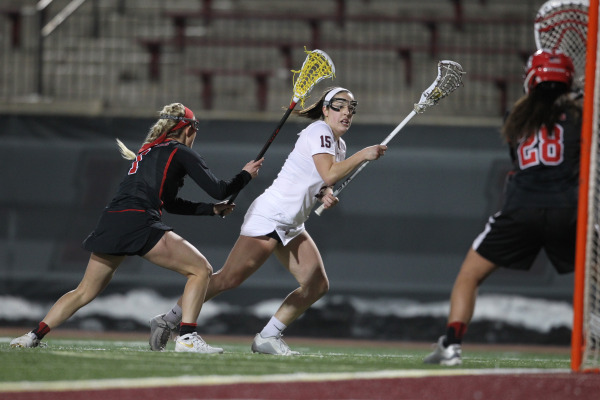 Jane Kirby ’19 in a game against Rutgers (Courtesy of Athletic Communications).

AJ Traub: How did your role in the thriving Lafayette offense open up scoring opportunities for you against American?

AT: How did you and your team react to your accomplishment of scoring eight goals in a game?

JK: I was really frustrated in our Bucknell game, which was our mid-week game, and I wasn’t finishing my shots in that game. So I was taking out my frustration in this game and channeling my built-up energy to this game. My teammates were obviously very happy, but as a team there were a lot of other people we could acknowledge last Saturday. We had various people score, so as an entire team we were excited to celebrate a lot of the other accomplishments, specifically the defense who may go unrecognized for making big plays.

AT: You’re now in the top 20 goal scorers of Division I with your latest performance. How has your play been, compared to your preseason expectations?

JK: In the fall season, I was able to contribute a lot more to our offensive plays and I was excited to be starting in our fall tournaments and to be getting one or two goals. So that helped fuel my confidence for the spring season. I definitely didn’t expect to have as much success as I’ve had so far. I’ve been working with my teammates and they’ve fueled my energy to work hard and continue the momentum we’ve built up so far this season.

JK: We went into Colgate knowing from last season that it was going to be a tighter game. For both Colgate and Bucknell, our coach prepared us with minor tweaks to our offensive and defensive plays, specific to those teams that would help contribute to our success. After those two games, since they were so close, our team has become better at being comfortable in uncomfortable situations. For example, in the Colgate game we were down 6-1 in the first half, but by the end of the first half we scored five goals and were tied. Those moments have made us more confident as an entire team that we can stay in the game even if we’re down early.

JK: We’ve done a better job overall as a team of holding each other accountable. For example, making sure attackers and midfielders get down to the field and shoot at least twice a week, making sure the defense works on their footwork, and having each player attend an individual, which is a smaller practice during the day focused on one skill-set.

AT: Lafayette stands atop the Patriot League, but record-wise, the schedule gets tougher. How does the blowout win against American help the team in the near future?

JK: During the American game, we tried to focus on the little things that would make a difference down the stretch. We are fortunate enough in the American game to have every player on the team get into the game. This allowed the team as a whole to practice all the fundamentals we had been working on throughout the season in a game situation. This continued to build our confidence as a whole.

AT: Now that you’ve scored eight goals in a game, what are your goals for the rest of your lacrosse career?

JK: I play behind the crease, so I’m a low attacker. One of my goals as a low attacker is to increase my productivity in feeding into the eight-meter, so assisting midfielders and attackers who play at the top.

AT: Your eight goals led to “Love On Me” by Galantis being played eight times against American. How did you choose this song?

JK: Honestly, it’s just one of my songs I would listen to on my phone before a game and we also played in the locker room a lot. It pumps me up. The initial part of the song gets everyone hyped up.

AT: What is your favorite part of game day?

JK: Sitting in the locker room before the game, putting on my uniform, putting my hair up and headband on, and watching my teammates around me get excited for the game we’re about to play. I’m always excited for the speech our coach Ali Fisher has prepared for us. Then lining up and walking onto the field in two lines.

AT: Do you have a pregame ritual?

JK: No homework before games is allowed.

AT: How did you first start playing lacrosse?

JK: I started in third grade. I played for my town’s [recreation] team. I bought my first pink lacrosse stick and loved it since the first time I played. I have two older brothers and a younger brother. All four of us play lacrosse. My oldest brother played lacrosse at Duke University and my other older brother played lacrosse at Harvard. We all grew up playing in our backyard, sharing our experiences and love of the sport together.

JK: I’ve been skiing my whole life, and I have a house in Colorado.