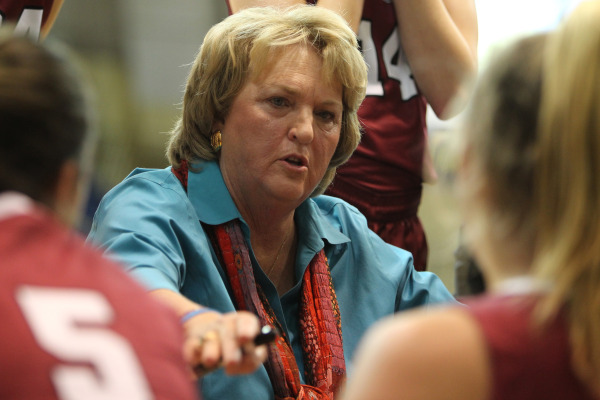 After spending just two years as the head coach of the women’s basketball team, Theresa Grentz has been removed from her position. The move comes after the Leopards finished their worst season since 2004, posting an abysmal 4-28 record on the year.

“After a thorough review of our women’s basketball program, I determined that a leadership change was needed,” said Director of Athletics Bruce McCutcheon in a press release on Tuesday. “We thank Coach Grentz for her service to the College.”

A national search for Grentz’s replacement will begin immediately. In the mean time, then associate head coach under Grentz, C.K. Calhoun, will serve as the interim head coach of the women’s basketball team.

Before becoming the head coach of the Leopards, Grentz spent a year as an assistant under then head coach Dianne Nolan. After Nolan retired in 2015, Grentz assumed the role of head coach. In her two years at Lafayette, Grentz tallied a 10-51 record, with just one Patriot League Tournament victory.

Grentz, who has been a head coach for for 33 years, started her coaching career at St. Joseph’s where she complied a 27-5 record in two seasons. She then decided to take the head coaching position at Rutger’s University, where she stayed for 19 seasons. During her time at Rutgers, Grentz posted an astonishing 434-150 record, including a streak of nine straight postseason appearances for the Scarlet Knights.

In 1992, Grentz served as the head coach of the Olympic women’s basketball team, where she led USA to a bronze medal in Barcelona. Grentz left Rutgers in 1995 to take the head coaching position at the University of Illinois, where she compiled a record of 210-156 in 12 years.

She took a hiatus from collegiate coaching in 2007 to take the role of vice president for university advancement at her alma mater Immaculata, before leaving that position to return to coaching at Lafayette.

Grentz was named to Women’s Basketball Hall of Fame in 2001, and currently sits in 34th place on the list of all-time wins for women’s basketball coaches. Unfortunately for Grentz, her legacy did not follow her to College Hill.

Grentz is the second head coach to leave the school this year, with long time head football coach Frank Tavani announcing his retirement in November.

All this comes on the heels of Lafayette announcing it was hiring a consulting firm to review its athletics department. It is unclear at the moment whether Grentz’s departure is related or not.

The Lafayette reached out to Grentz, McCutcheon and Calhoun, all did not respond for comment before press time.