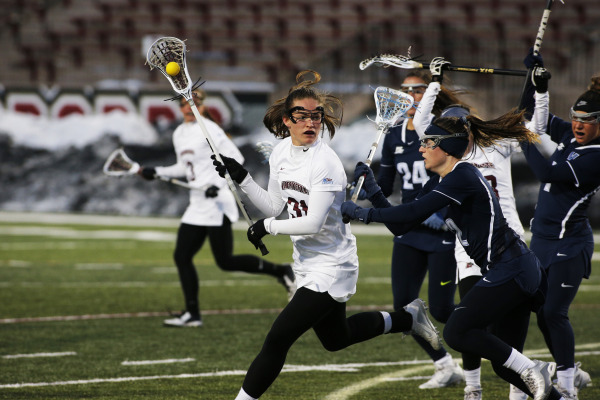 Kirsten Wilhelmsen ’17 attacks with the ball. (Courtesy of Athletic Communications)

After winning just six games last season, the women’s lacrosse team is on pace to more than two times better this year.

With wins against Bucknell and American in the past week, the Leopards moved to 9-3 overall and 4-0 within Patriot League play. This is the best start overall to a season since 2001 and the best start to league play since 2002.

“I think we have a lot more composure this year on the field and we also have a lot more depth on our bench than we have in years past,” said senior captain Amanda Case. “The combination of those two things has really helped us pull out wins that we haven’t in years past.”

Against Bucknell, three Leopards posted hat tricks to edge the Bison by a score of 14-13. Senior Kirsten Wilhelmsen and sophomores Emma Novick and Hannah Davey each tallied three goals. Lafayette dominated the opponent in the area of shots, ground balls and draw controls.

“From our Bucknell game, which was mid-week, I was really frustrated because I couldn’t finish my shots,” Kirby said. “I guess I was just kind of taking out my energy and contributing it to the game against American. Obviously, there was a lot of other people who accomplished a lot in that game, too. It was just awesome to have success across the entire team and have the final result on the scoreboard.”

The Leopards will need to continue to receive this contribution throughout the team, as scouting opponents have focused on defending Wilhelmsen, who remains near the top of Division I rankings in both goals and goals per game.

“It’s been pretty ineffective when they try to focus on just me. Emma and Jane are putting up huge numbers,” Wilhelmsen said. “It’s great to have those multiple threats that make it really hard to defend our attack across the board.”

“We are obviously going into the tougher end of our Patriot League games, but I think being 4-0 and winning the games we didn’t win last season is giving us a lot of confidence in the next five games,” Case said.