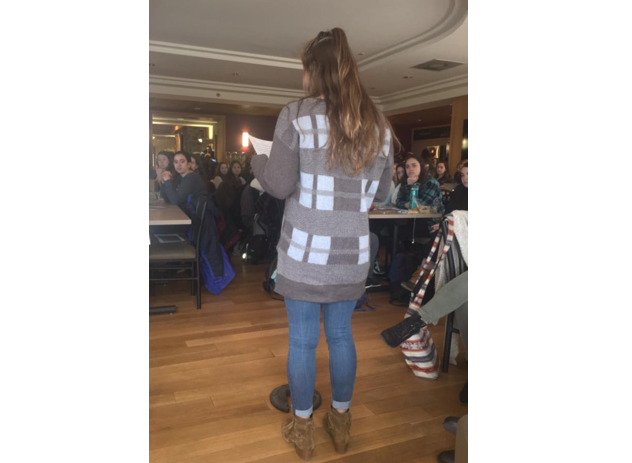 Samantha Arnold ’18 speaking to a packed Lower Farinon about her attack. (Courtesy of Cristina Usino).

Lafayette is the kind of college where everybody knows your name, but small-town charm has its downfalls. Survivors of sexual assault said fear of judgment from this close-knit community has kept them from speaking out about the crimes against them.

Of three women who talked to The Lafayette about their assaults, only one allowed her name to be used. Only one filed an internal conduct complaint against her attacker. None filed criminal charges.

“I think the backlash I…still fear more than anything in the world isn’t from the administration. It’s from the student body,” said Samantha Arnold ’18, who was assaulted at a party her sophomore year. She added that she found a similar fear in other survivors she talked to.

“Often times, the people attacking are very prominent in the community, and they’re very popular,” said Arnold, whose alleged attacker was a fellow student and ex-boyfriend.

Two of the women interviewed for this story said they knew their attackers. They were ex-boyfriends and so-called big men on campus. One repeatedly groped and harassed. The other raped and stalked. Only one was punished, by expulsion and not criminal charges, and all three women said they suffered mental health struggles for months and even years after the incidents.

A student survivor of rape, who wished to remain anonymous, said she heard others thought she only claimed she was raped because she “wasn’t satisfied with the sex.” These people did not know she was the victim.

This student added that this reaction shows that “the campus really isn’t educated enough.”

Another student survivor of rape at Lafayette, who also wished to remain anonymous, said that the process of reporting an attacker through the college’s conduct process has improved since she did it three years ago, but student attitudes haven’t made the same gains.

Now a senior, she said she was raped her freshman year by her abusive then-boyfriend, who she alleges subsequently harassed and stalked her. Stress worsened when her then-friends questioned if she could even be raped by someone she was in a relationship with.

“There is definitely a huge stigma [aro­und reporting sexual assault],” she said. “One of my good friends at that point was also friends with him, and she said she didn’t think he meant it and that I should give him another chance. And I was like, ‘Are you fucking kidding me?’”

“I said [to my friends at the time], ‘I’m not asking that you don’t be friends with him. I’m asking that you validate my experience,’” she said. She acknowledged that since the rape occurred so early in her freshman year, the friends she had at that point had only known her for a short time and handled the situation immaturely.

She said her attacker was ultimately expelled from the college. The conduct process was stressful for her, because the college officials who specialized in Title IX only did so part-time. As a result, she said, they couldn’t tell her about all the options through which she could have sought support.

When she entered the conduct hearing for her attacker, she felt she had no one to support her. She said she was unaware of resources such as the Lehigh Valley Crimes Victims Council, an organization which supports victims of sexual violence.

All three survivors emphasized how the presence of Title IX Coordinator Amy O’Neill on campus has been vital to their experience, as she can inform them of all their options and resources.

“Amy O’Neill has been so helpful,” said one of the students who wished to remain anonymous. She added that O’Neill has been understanding and respectful of the decision the survivor made not to formally report her attack through public safety.

The Lafayette contacted O’Neill but she did not respond for comment by press time.

Despite how comfortable they said O’Neill has made their experience, these three survivors agreed that the campus remains largely uneducated on this issue. Coordinator of Gender and Sexuality Programs Cristina Usino said she is working with Arnold and other survivors to change this.

Usino said that “It’s On Us: Takes a Stand” on April 26, part of sexual assault awareness week at the end of the month, will be an opportunity for the whole college to learn about campus rape culture and the resources available to victims.

Arnold spearheaded December’s “It’s On Us Gets Personal” event, where survivors read their accounts aloud to a packed Lower Farinon. Usino said this event was a step toward educating the student body.

Still, the National Sexual Violence Research Center reports that the vast majority of college sexual assaults go unreported while campus predators continue to prey on young women who say they are afraid they will be humiliated, not by the investigators, but by their peers.

Factors weighing against assault survivors include the common misconceptions that it can only be rape if the attacker is a stranger and that the victim is somehow to blame.

“Women are blamed for leading men on, and not controlling the situation,” women and gender studies professor Susan Basow said.

Basow, a licensed psychologist, said that assault survivors tend to blame themselves for drinking too much or trusting the assaulter. She said this is a “paradoxical reaction,” as control is taken entirely out of victims’ hands when they are attacked.

“There’s a culture [at Lafayette] of fear of retaliation among peers,” Usino said. “From what I’ve heard from survivors who come to meet with me, that is actually the universal thread that I hear.”

Arnold said that the stereotype about attackers being “one dimensional rapist figures and…not actual people makes…it all the harder to believe” survivors of assault.

While strides are made toward bettering campus culture, the campus itself continues to serve as a painful reminder to survivors every day.

“To this day when I walk past [my old dorm], I see my room,” one of the anonymous women said. “I’m not going to get better or be normal again until I leave this campus, because how can I walk past the room where it happened every day?”