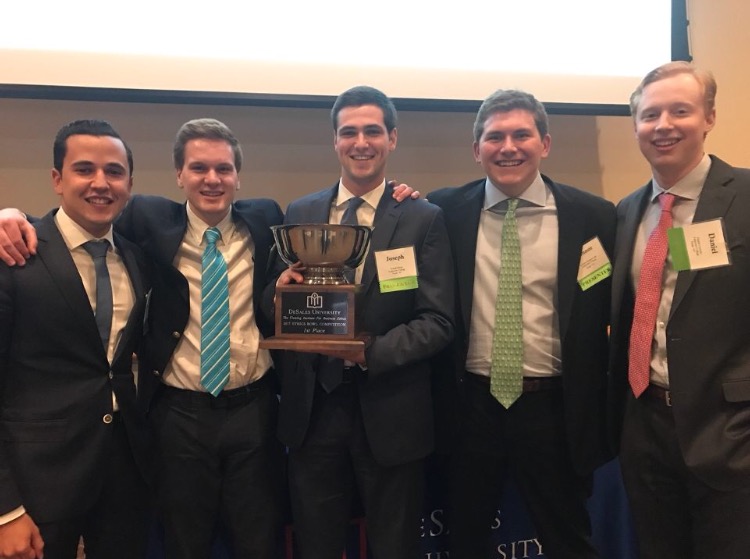 Winners of the Business Ethics Competition at Desales University. (Courtesy of Othman Guennoun ’17).

When faced with a tough decision between staying ethical and making money, a group of Lafayette students found a way to do both.

Lafayette’s Ethics Bowl team emerged victorious from the eight-team competition at DeSales University. Participating as a group of friends, the seniors were up against business students participating in the competition as their final exam.

The competition consists of a 20-minute presentation about the team’s solution to the ethical dilemma and a 15-minute question and answer session. Business executives judged the contest.

The first round put each team in the shoes of an insurance company. They had to decide whether or not to change the taxi system in New York City and instead cover a government contract for self-driving cars. The team would have to bribe the government to get the contract and put current cab drivers out.

Instead of choosing whether or not to take the contract, the Lafayette team chose to privatize the venture to avoid the unethical bribery. They fixed the safety and unemployment issues by having current cab drivers ride in the self-driving vehicles for the first couple years to ensure their functionality. This plan had the added business benefit of allowing them to expand beyond the New York City Metropolitan Area.

Othman Guennoun ’17, one of the team members shared an anecdote about the first round.

“There was one judge, Pat Lincoln, that grilled us with questions and was very hard on us, so we were worried,” Guennoun ’17 said. “We found out at the end that he did that just because he was very impressed by the idea. He said he’d better see us at [College Hill Tavern] that night as a joke.”

The second round was a twist on the first round that required a new solution. The situation was that by the year 2030, the self-driving vehicles caused enough accidents to require high insurance premiums, which would make the cars only accessible to the rich. The team had to decide whether to continue covering the cars.

Lafayette was the only team that advanced to this round that chose to continue coverage. Their solution was to use price discrimination so that the rich paid a lot for coverage while the poor paid less, making it equally accessible to all.

Guennoun credited this idea to Connor Steigerwald ’17, who said that he learned about price discrimination in the course Marketing Science.

Joseph Ritter ’17 said that although he is not an economics major, he was still able to help out the team in critical ways.

“I think that me and [Andrew Wargofchik ’17], as the non-econ majors, were particularly strong in the part of the case that had legal dilemmas and legal aspects,” he said.

Wargofchik said that Lafayette’s liberal arts atmosphere was helpful in this competition.

“Lafayette proved superior to a business school…The fact that we had people from so many different disciplines led us to win,” he said.

A few of the team members had participated in the Ethics Bowl in 2015, but did not make it to the finals then. They said they felt more prepared this time and learned to focus more on the ethical implications.

When asked about the win this year, Dan Crowley ’17 said, “It was great. It felt good. Connor fell out of his chair.”

He compared their happiness to the United States after winning the Olympic Hockey game against the USSR in 1980.

All of the team members agreed that one of the most important parts of the whole process was their advisor, economics professor Rosie Bukics, who Wargofchik said “helped us nail down what we needed to do and kept us on the right track.”