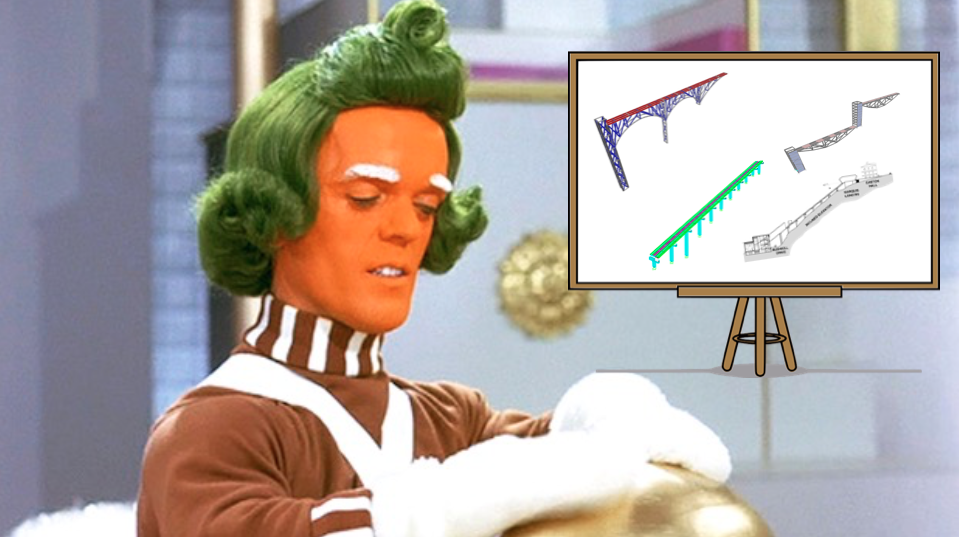 An Oompa Loompa presenting the plans for Wonka’s glass elevator.

Scheduled to be built next year, the elevator will cost the college $9 million and at least one goose laying golden eggs.

The court papers contend the elevator designers stole plans for the elevator from the iconic one in the Wonka factory.

Administer of Finance Maura Mulah said the elevator will connect students to the city of Easton.

“Stairs are difficult,” Mulah said. “Students really need a multi-million dollar glass elevator to bond with the people of Easton.”

Wonka and his Chocolate Factory declined to comment on matters of litigation.

One short orange employee of the factory spoke on his cigarette break to The Lafayette on the condition of anonymity for fear of career repercussions.

“Oompa loompa doompadee doo
I’ve got a perfect puzzle for you.
What do you get when you guzzle down tuition?
You’ll find yourself in matters of litigation,” the employee said.

“Anyway, this goddamn suit better not bankrupt Wonka,” the source added. “I got mouths to feed. This chocolate factory is a shitstorm. To hell with it, I’m complaining to the union.”

All this comes after the college’s plans to install a so-called “chocolate river” on March Street were struck down by the Easton Zoning Committee.

After that, the elevator did not seem possible. But a state grant and new design plans sweetened the deal—even if Wonka’s factory doesn’t think so.

“Our elevator design is completely different,” Lafayette’s Leader of Large Projects Bill Dit said. “And a death-trap for birds.”

Mulah said the elevator will attract perspective students, like high school junior Charles Bucket, who plans on applying in the fall.

“Sure, I’m excited and all for the college to spend millions on the elevator,” said Bucket, visiting with his grandfather who appeared to have just woken up. “But I thought financial aid was the real golden ticket.”

Another perspective student could not comment and is recovering in Bailey’s after a sudden “blueberry-related” illness.

Asked how the college will finance need-blind aid, a new science center, five new dorms, a dining hall that only serves lobster, BMWs for every student and a glass elevator, Mulah invited reporters into a “world of pure imagination.”