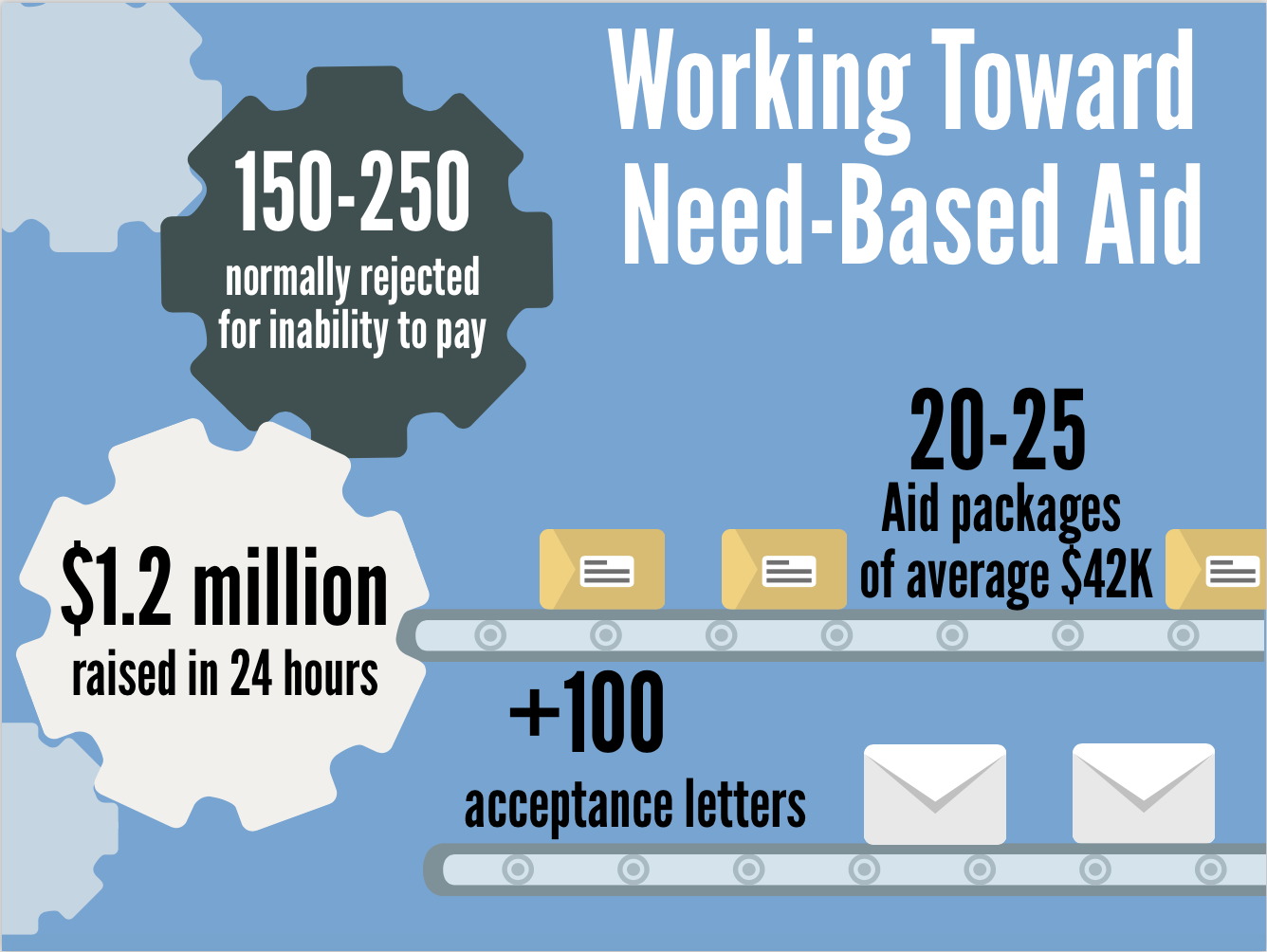 The figures only represent the size of the donations, not the way in which they will be directly used. (Graphic by Claire Grunewald ’20)

They had been calling alumni, parents and friends of the college in the U.S. and abroad since the early hours of the morning. Some stood outside Farinon at 8 a.m. to convince students that the President’s Challenge was a worthwhile donation.

But in the eleventh hour, a last flux of donations pushed the total up $300K to $1.2 million. All donations went into a new endowment dedicated to need-based financial aid, the 1826 Scholarship Fund.

Months of planning and work culminated on Founder’s Day, March 9, referring to the day the college’s charter was approved in 1826. More than 1,130 donors helped Lafayette exceed its 24-hour goal.

“What I really liked about the challenge is that it had this grassroots kind of feel,” Vice President of Development Kim Spang said. “So a lot of volunteers – and especially our younger alumni – this connected with them.”

Spang said classes of alumni, and even separate cities, seemed to be competing with each other over social media, bringing in more donations under the hashtag #BringTheBest.

“We wanted to do something with the community and build momentum in a very fun way but also a very serious way,” she said.

The smallest donation was $1, and the biggest was a pledge of $200,000. The majority of the donations were in direct cash, but some came in a pledge of donations over the course of some years. Spang said the development office asked pledge makers to “frontload” their donations, so that the college would receive the money sooner.

The donations were meant for the office of financial aid, and even the director of the office donated to the challenge. Ashley Bianchi and 30 others in the enrollment office contributed from their own pocket. Faculty and staff across the college also donated. Seven current students also opened their wallets for the cause.

Bianchi said the donations help the financial aid budget considerably. In sheer numbers, the $1.2 million equates to about 20-25 financial aid packages at roughly the average package of $42,000. Accounting for the ratio of people who receive an offer to attend Lafayette and accept it, this could equate to about 100 more acceptance offers. The President’s Challenge press team says that 150 to 250 applicants are turned away at the door for not being able to pay.

However, the money will feed into the overall need-based financial aid endowment, and the financial aid office will only see the benefits of the fundraising in the form of the college’s 5 percent withdrawal from the endowment to pay for costs every year.

The fundraising is part of the college’s capital campaign for $400 million for various projects. Last February, they shifted each goal within their target, and need-based financial aid got a $15 million boost to $85 million. They are currently at $60 million toward their goal.

After that change last year, the development office tried a similar challenge on Founder’s Day. They aimed to bring in 500 new gifts, and reached about $100,000, Spang recalled. She recognized that the $1 million mark was a lofty goal.

“We chose $1 million, because if we’re going to do this, the president’s name is on it, we have to be bold,” Spang said.

In preparation for this year’s challenge, communications shared students’ stories with financial aid and even President Alison Byerly personally became a marketing focus. She took part in several videos, four of which “challenged” another Lafayette student, faculty or alumni. In the videos, she challenged Cubs Manager Joe Maddon ’76 to a pancake flip, physics professor David Nice to a timed math challenge and Isaiah Coldren ’17 to a diving competition.

Byerly said her favorite may have been the flute competition with Laura Tralongo ’17, because Byerly used to play flute in her high school and college years.

Spang said she hopes the President’s Challenge will become an annual tradition.

“I think like we have the Lafayette-Lehigh challenge that happens every November,” Spang said. “I think now around March 9, this will become our tradition, where we bring the community together around one message.”