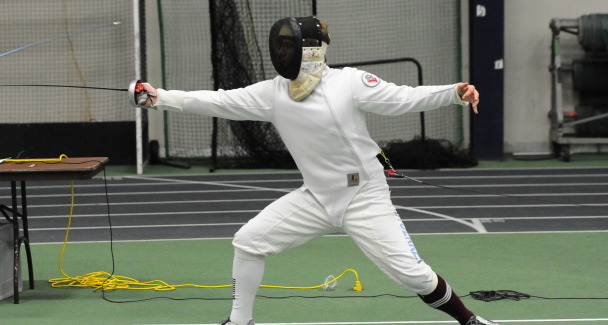 A member of the fencing team in a competition. (Courtesy of Athletic Communications)

While many students were fleeing campus to go on exotic vacations for spring break, several fencers stayed in Easton to compete in the NCAA regionals.

On March 11, Lafayette hosted 15 schools in the NCAA Mid-Atlantic/South NCAA Regional at the Kirby Sports Center. Four Lafayette fencers qualified and participated in the tournament. Junior Alex Gorloff led the Leopards with an 18th place finish in a pool of 35 fencers.

Gorloff won all four of his matches in the first round, compiling a 20-8 score. In the following two pool rounds, he went 28-47.

Senior Conrad Stoerker participated in the epee division of the tournament, finishing in 32nd place with a 15-24 mark. Freshmen Ian Miller and Patrick Rekieta competed in the sabre division, Miller finishing in 27th with a 14-21 mark and Rekieta in 28th with a 15-23 record.

This year’s finish was certainly a step up from last year’s, when the NCAA regionals at Kirby Sports Center had to be moved to Moravian College due to the norovirus outbreak and the Lafayette fencers were barred from competing. Although no Leopards qualified for Nationals, Rekieta said he was glad he competed in Regionals.

“It’s definitely satisfying knowing that I’m able to qualify [for Regionals]. It gives me a lot of confidence going forward into the rest of my career here at Lafayette. It’s definitely good getting the experience my freshman year so that going forward I’m a lot more confident going into it and I know what to expect out of it,” said Rekieta.

The weekend before, Lafayette competed in the Mid-Atlantic Collegiate Fencing Association tournament held at Johns Hopkins University. Those competing for Lafayette in the sabre division finished in fourth place.

“My squad, the sabre squad, has put in so much effort and so much work that we wouldn’t be where we got to this year without all that practice and everything,” Gorloff said.