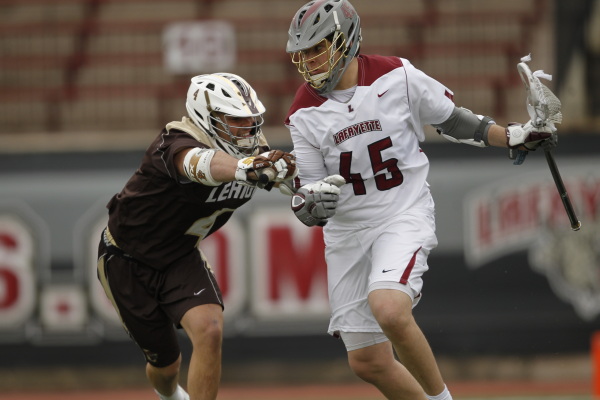 After nearly a month after playing in their season opener, the men’s lacrosse team finally notched their first victory of the year.

The Leopards grabbed their first win of the season on March 11 against the Navy Midshipmen with a score of 9-8 to bring their record to 1-5. They jumped out to a quick start and managed to top Navy, which ranked in the top 10 at the beginning of the season and 28th in the country in late February.

Junior Luke Smith led the Leopards in the first half getting a hat trick in the first 30 minutes of the game and providing the men a 6-3 lead heading in halftime. It was Navy who took control out of the locker room and brought the Midshipmen within two goals. Lafayette answered with three goals of their own and extended their lead to 9-5 heading into crunch time. The Midshipmen fought back and brought the game to within one goal, scoring three goals in the final quarter, but were unable to secure the comeback.

This gave Lafayette their first win of the year, with sophomore goalie Jonathan Anastos having 11 saves throughout the day.

“I thought it was a great effort in all facets of the game, the guys really understood and executed the game plan very well, and I’m proud of them and their effort to get the win,” said head coach Jim Rogalski.

The Leopards then moved onto their next game against rival Lehigh with a bit of confidence from their previous victory. Unfortunately for the Leopards, the confidence didn’t translate into results and they fell to the Mountain Hawks 15-7. The Leopards struggled to find the net for most of the game and found themselves in a 5-1 hole after the first quarter and a 7-3 deficit heading into the break.

Sophomores Conor Walters and Connar Dehnert were the only Leopards to tally multiple goals on the day with two goals apiece. Anastos let 15 goals slip by on the afternoon. The Mountain Hawks led in most categories including ground balls, 39-36, and won 15 of the 26 face-offs.

The Leopards return to action after spring break to prepare for a Patriot League tilt against Boston University on Saturday March 25, where they will look to take their second conference victory.