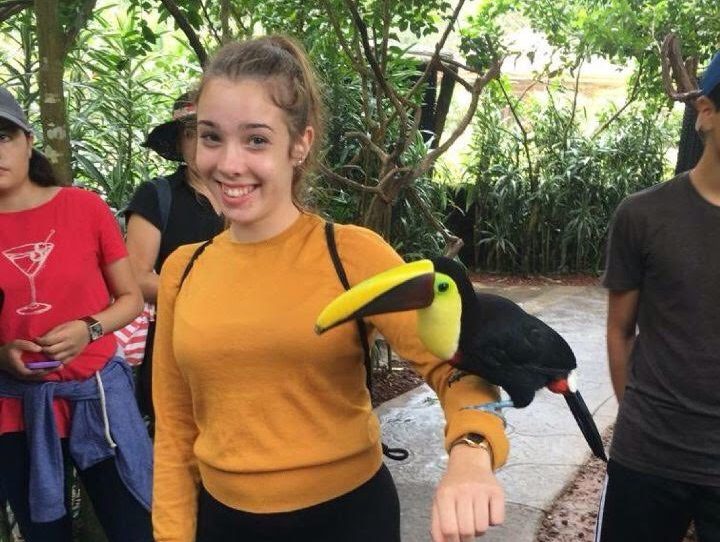 Amanda Miner ’18 had a powerful presence and a loud voice. Above all, friends said, she loved service, children and her hometown of Brooklyn.

“She was very Brooklyn,” Jesinta Blaylock ’17 remembers. “We’re both from New York, you rarely meet anyone that’s like us on this campus. Freshman year was hard because I felt so out of place, being that I’m from New York. Having her come visit, I instantly felt like a little piece of home, and I knew that I would be really happy if she came here.”

Miner was killed in a car accident on the Williamsburg Bridge in Brooklyn on March 16 while celebrating her 21st birthday. She was in the backseat of a car driven by a man now charged with driving while intoxicated.

This past Tuesday, friends, classmates and professors of Miner gathered in Colton Chapel to hold a vigil to celebrate the memory of Miner.

Chaplain Alex Hendrickson and President Alison Byerly spoke about Miner’s dedication to helping others through her work with the America Reads initiative and Breakthrough New York. Throughout high school as a student and office intern, Miner worked with Breakthrough New York, a program that aims at helping low-income students excel.

Hagar Kenawy ’17 wrote in an email about her experience while tutoring with Miner at the Cheston Elementary School with America Reads.

“I would be having a rough day, and with her, it was always a period of laughter,” Kenawy wrote. “When we were tutoring, she was the first to engage with the kids with no hesitation, even if those in charge still didn’t tell us what to do. Her spirit was loved by the kids.”

Hendrickson noted the immense amount of loss the college has faced this academic year, with Miner’s death following those of Sarah Bramley ’19 and Joey Towers ’18.

Friends, classmates and professors of Miner took turns telling stories about their favorite memories of Amanda. Common themes were her loud voice, powerful presence, love for Brooklyn and love for service. Other students touched on Amanda’s ability to brighten anyone’s day with a “Hey girl!”

“We clicked right away,” Abdelrahman said. “I clicked with her more than the girls on my team because we’re just both so loud and we laugh a lot at so many things.”

“She just wanted to love people,” Blaylock said. “Everything for Amanda was about having a good time. I’m trying not to be sad, it’s really hard obviously. It’s so difficult to imagine her not alive anymore, because she was such a lively person. You never saw her without a smile on her face.”

“She was one of the only ones in the group that was down to go out every night, go out and have fun,” he said. “I had Spanish class with her, and she always tried to get me to speak Spanish with her.”

“By the end of it she came back knowing more Spanish than she went there with,” he added. “I know she was so happy to start talking to her grandmother in Spanish and start bridging that communication barrier.”

Abdelrahman said that her favorite memory with Miner is when she brought her to a mosque in Easton for a paper Miner had to write for her religion class.

“I’d never been to the mosque here, I knew nothing,” she said. “But she asked me to take her to the Friday prayers.”

Miner took care to ask exactly what she should wear so that she would be as respectful as possible, Abdelrahman recalled. It was a hot spring day, but Miner showed up in long sleeves and pants with her hair pulled back and joined the women at the mosque in prayer.

“The women liked her right away, she did not need me there,” she said. “They gave her headscarves for the prayer and they answered all her questions.”

Abdelrahman said that Miner made an observation of services at the mosque that hadn’t occurred to Abdelrahman before.

“On the way back from the mosque, she was talking about how she really liked how in the prayers the men are by themselves and the women are by themselves, she said she’d never been in a setting where she was segregated from men and had a women-only thing,” Abdelrahman said. “She felt that was so powerful because she could be herself more, and she felt very included.”

“Amanda was the first person I met at this school who was talking to me about my religion in a way that I hadn’t thought of before,” she added.

Daniel said the Lafayette community should honor Miner’s memory by emulating the way she lived her life.

“Just open up your heart to other people,” he said. “Everything she wanted to do was nonprofit. She saw no desire to go out there and make money. She just wanted to help other people.”

“I think that’s something we forget nowadays – we’re so wrapped up in ‘Oh, I want this so-and-so car, or I want to live in such-and-such house.’ And we don’t remember there are people a lot less fortunate than us,” he said.

Miner’s family asked that donations in Miner’s name be made to Breakthrough New York in lieu of flowers.