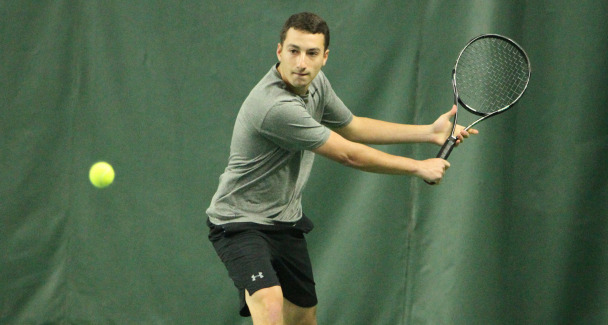 It’s always important for a team to win before going on a long hiatus, and the men’s and women’s tennis teams, they’re doing just that – and more.

As spring break approaches, both teams are riding win streaks, with the men winning three straight and the women winning two. The men’s streak started on Feb. 24 when they swept Muhlenberg, 9-0. This past weekend, both teams took on Rider at the Northwood Racquet Club.

The men started off the match strong, grabbing the doubles point with 6-4 victories across the board. In the singles matches the Leopards won all matches except one. All in all, the men only dropped one set in the entire match on the way to a 6-1 victory over the Broncs.

Following the men’s victory, the women took to the courts and also came away with a 6-1 victory. Like the men, the women won the doubles point and five of the six available singles points. Freshman Grace Conrad had a dominating performance, sweeping her opponent in singles 6-0, 6-0.

On Sunday, the Leopards traveled up to Jersey City to take on St. Peter’s. Although both teams came away with the victory, it certainly was not as easy as their victories over Rider. The men escaped with a 4-3 win while the women were able to win 5-2.

The team of junior Mason Keel and freshman Drew Rooks was able to win their double match, then junior Chris Kim and freshman Paul Caruso won theirs to seal the doubles point for the Leopards. That proved to be the difference maker as the Leopards and Peacocks split their singles points 3-3.

The women were unable to win their doubles point after the team of seniors Tori Almeida and Lauren Tracy couldn’t win the tiebreak point and fell 7-6 (10-8). The Leopards, however, bounced back and dominated the singles portion of the match winning five of the six points up for grabs.