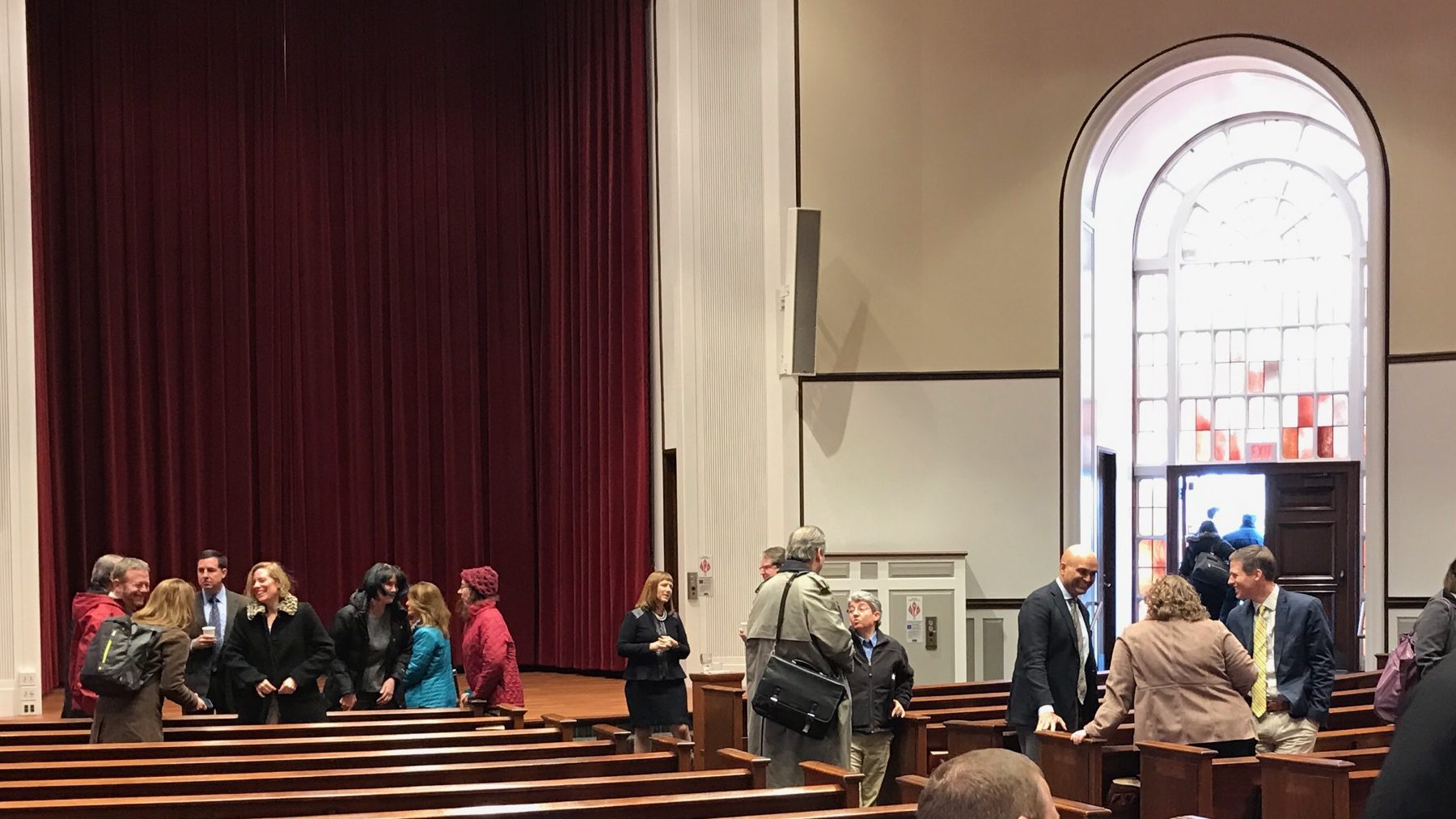 Faculty and staff gathering after the town hall. (Photo by Claire McNulty ’20.)

During time for questions, the audience voiced their concerns, which included what happens if building construction cannot go as planned, if temporary classroom and office space will be necessary and the future of the Bushkill Drive Corridor.

Haley Matthes ‘19 said in the town hall meeting that she felt concern about what might happen if Easton does not allow the college to build on either McCartney St. or Cattell St.

Byerly responded by saying that the college has a small number of other sites they could use instead if Lafayette is denied permission but did not specify where these sites were.

Matthes said she found Byerly’s answer to her question insufficient and that she believes there is a larger lack of communication between the college and students.

“I don’t think [Byerly’s answer] was adequate,” she said. “I think it was vague, and I think she should have had the lawyers who are representing the school present at the town hall meeting, because she was just reiterating everything that she’s released on Facebook and in emails.”

“I think there’s been a lack of transparency between the administration and the students, at least as to where things are going,” Matthes added.

Byerly said that she recognized that people could have still left the town hall confused despite her answers.

“My sense was that some people in the audience had a better picture of what we’d already talked about, and others were hearing it for the first time,” Byerly said. “And so I hope that what I said was useful to the people who asked the question. But it’s always possible that someone walked away saying ‘I’m still confused about exactly what’s happening.'”

Answering another concern about office space on campus, Byerly said that no temporary classrooms or offices for the influx of students and staff will be built. Since many staff members have relocated to facilities in downtown Easton, more space has been opened up. She said she believes that this move also allows Lafayette to interact more closely with the Easton community.

Kayla Zola ‘18 went to the town hall representing the Lafayette Tech Clinic, a program in which students work together to find “imaginative solutions to real-world problems for clients,” according to its website. Zola is currently working on a tech clinic project to improve the Bushkill Dr. area.

“We were curious to hear specifically how President Byerly sees the future of that area and what she sees happening there in the next 10-ish years….She explained that she sees the area as a green corridor or river walk that will be improved by efforts from both the College and [Simon Silk Mill],” Zola wrote in an email.

“Overall, I found the meeting very effective,” Zola added. “It was a great way to gather members of the community and address any questions or concerns.”

Byerly said she felt the meeting provided a great opportunity to have an open discussion about potential issues and concerns surrounding the college’s expansion efforts.

Kayla Zola ’18 is a staff writer for The Lafayette.