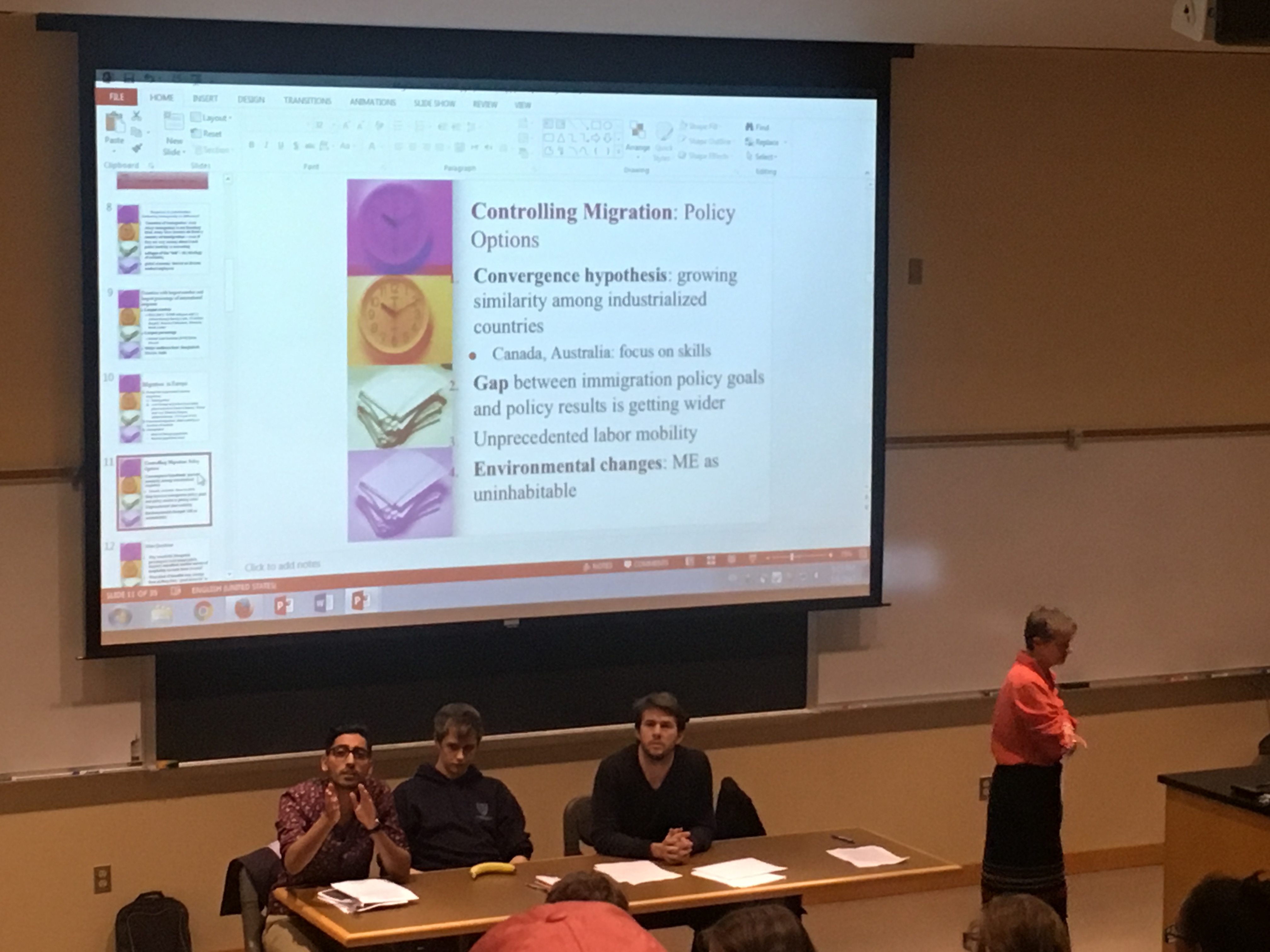 The panel discussion “Is Mass Imigration Bad for Europe?” was meant to frame questions from a conservative viewpoint about the effect of Middle East migrants into Europe. Controversy surrounding the topic brought into question not only its content but the title of the discussion itself.

This was the second talk in the John Stuart Mill Series. Around 25 students attended a nearly two hour-long panel discussion led by government and law professors Brandon Van Dyck and Katalin Fabian, and Abdul Manan Bhat ’18 and Ian Morse ’17.

Fabian gave a presentation at the panel discussion supporting mass immigration into Europe.

Fabian said that we are being “shortsighted” by rejecting young people seeking shelter and asylum and argued that it is good for European countries with aging populations to accept immigrants to have a younger population. Multiculturalism leads to globalization, she said, which is essential to European countries.

Van Dyck then read a letter written by a student who was supposed to be on the panel but could not attend due to a medical issue. Because he could not be there in person to answer questions and defend his points, Van Dyck said the student wished to remain anonymous.

The letter took a stance against mass migration into Europe. In it, the student wrote about issues with the European Union’s open border policy, arguing that it allows immigrants to move throughout Europe unchecked. The student claimed in the letter that Sweden is the rape capital of Europe and cited immigration as the reason. The letter also mentioned Islam for the first time in the talk, though later in the discussion it became a prominent topic. The student claimed that the majority of migrants “do not hold core Western values.”

Several students and one faculty member took issue with the fact that this student was allowed to express his opinion but remain anonymous. Van Dyck said that anyone would be allowed to write a similar anonymous note.

The floor then opened to the students in the audience for comments and questions.

Several of the student arguments were more pro-immigration, but a couple argued against it. Some of the students also took issue with the note from the anonymous student for claiming that Sweden is the rape capital of Europe, asking for evidence.

At the talk, Van Dyck listed scholars from Harvard and Oxford, and cited “millions of Europeans” as people who are against mass immigration into Europe.

Van Dyck said that he does not “take the view that mass immigration is bad for Europe” himself, but that he is a “free speech absolutist.”

He opened the discussion by saying that he invited two professors who expressed discontent at the discussion topic and would not take part in the panel. History professor Rachel Goshgarian and anthropology and sociology professor Neha Vora declined to participate, with Goshgarian taking issue with simplifying a large topic and Vora citing concerns about the title.

“I thought the panel title [which was initially entitled “Is Middle Eastern Immigration Bad for Europe?”] was sensationalistic and played on the kind of rhetoric stoked by the current administration, which encourages emotion-based categorization of foreigners into categories of “good” and “bad,” instead of fact-based learning about the causes of migration and the experiences of migrants themselves,” Vora wrote in an email.

Goshgarian wrote in an email that she said “the framing of the panel was un-intellectual” because “suggesting to our students that after 45 minutes they might be able to make a judgment about whether migration to Europe was good or bad was both disingenuous and, frankly, the opposite of what the liberal arts education offers our students.”

She added that she suggested that Van Dyck organize “a small committee of professors and students to better organize and prepare his series to ensure that qualified members of our campus communities were both engaged in the organization, the preparation, the participation and the attendance,” but Van Dyck did not take her advice.

Another issue Vora had with the talk was that there was no evidence of original research done on the topic. Van Dyck said that he “believed” students were informed enough to have the debate.

He added that he felt “no one on campus ever hears from the right” and that this series of talks would give students the ability to hear opinions that challenge the left.

“If college campuses were dominated by people on the right, we would be doing the same thing with left wing perspectives,” he said.

This is the platform you wrote two articles demanding, and you used it to read awful claims about rape statistics directly from /pol/.

It baffles me how the right maintains a platform based on anti-intellectualism and then demand a place in academia.

In response to the two previous commenters.

2. “It baffles me how the right maintains a platform based on anti-intellectualism and then demand a place in academia.” A few points. First, the right does not have a platform. The GOP does. These two categories are overlapping but far from the same. Second, you would be quite wrong to argue that the right is anti-intellectual. Small “c” conservatism, libertarianism, religious traditionalism and other strains of right-of-center thinking count hundreds of brilliant, able defenders and are associated with rich, extensive bodies of literature. Third, there is anti-intellectualism (i.e., close-mindedness) on every side of virtually every question. A good rule of thumb: criticize close-mindedness wherever you see it, both on the left and the right. I certainly grant you that, in certain places at certain times, there is more close-mindedness in one political coalition than in another.

Note: In a previous version of this comment, the author inserted the wrong quotation for point two. The quote was changed at the author’s request, and the current comment reflects these changes.

Apologies, but I don’t see how a discussion of which views are demonized where is interactive with my comment. I’m not claiming that conservative viewpoints are popular at Lafayette, I’m trying to dispel the rumor that those ideas are either actively being censored or are not being given a platform on which to speak. Regardless of the political slant of the student body and professors, the talk itself is an example of conservative ideology being given the time of day, right?

No one at Lafayette is formally censoring conservative viewpoints, and my guess is that few at Lafayette intend to informally censor conservative viewpoints. But, to some degree, students and faculty self-censor in order to avoid being negatively judged (or, to use one student’s phrase in an email to me, “for fear of ostracism from the faculty and their peers”). I have urged the individuals with whom I have discussed these matters not to self-censor, but I think that such self-censoring is inevitable to the extent that individuals anticipate paying social, academic or professional costs for expressing certain views.

The following are just a few data points, but I think that they support the view that there is a problem at Lafayette (not a catastrophe, just a problem):

1. Several individuals in the faculty and administration, and a larger number of students, have written or approached me to say that they think the Mill Series is good for Lafayette, and/or that they have self-censored in classrooms or other types of discussions on campus.

2. Two students have recently written op-eds in the Lafayette expressing a desire for more open-minded discussion of right-of-center viewpoints on the Lafayette campus or by Lafayette faculty. These students could cite examples from their own experiences at Lafayette, I would think.

3. One student recently created a book club in order to foment precisely such a discussion. He and fellow book club members would also be able to cite examples from their own experiences, I would think.

This makes me confused as to what conservatives on campus want. If the only forces responsible for “censorship” are students and faculty that feel differently, what would solve your problem? Should every student suddenly switch ideologies in order to become a more palatable crowd for conservative thinking? If they attend conservative programming and remain unconvinced, then what?

I’d wager that your belief is that students have not been adequately exposed to conservative viewpoints, and yet your singular event so far has consisted of publicly reading the letters from faculty who did not want to participate in this panel in an attempt to drag them through the mud and reading from a nonsensical letter calling Sweden the “rape capital of the world.” Is this the type of programming that will convince centrists to lean right and convince leftists to be receptive to conservative ideology? It’s not hard to see why you’re being judged for believing these things if this is the type of event that exemplifies your beliefs.

As to your data points, I assume you’re aware that as a prominent conservative voice on-campus, you’re much more likely to be receiving accounts from disgruntled conservatives than placated liberals. The op-eds in the Lafayette are not evidence and don’t contain any meaningful sourced claims. Honestly, the most troubling thing you’re citing is the book club, which seems to me to be a group of students gathering together to discuss conservative ideology in a safe environment, the very thing you’re claiming doesn’t exist at Lafayette.