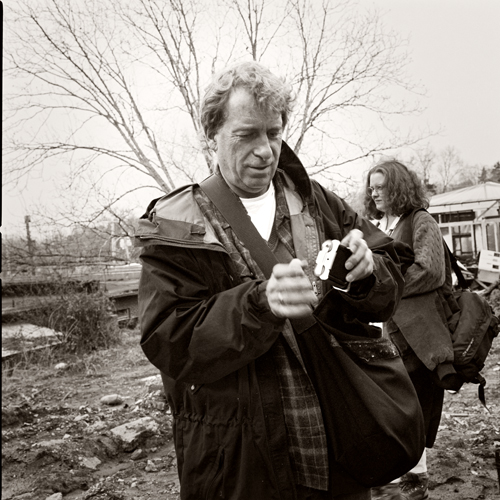 Artist William Wegman visited the college to lecture on his works (Photo courtesy of Wikimedia commons).

“How many dogs do you know that can sail a sailboat by themselves?” Wegman asked.

The photograph Wegman had at hand – two dogs posing on a red sailboat set against an azure sky and lake – epitomizes Wegman’s ability to infuse rich photographs with an absurd and playful sense of humor.

Wegman’s lecture was an introductory talk for his exhibit “Drawings for a Better Tomorrow and a Worse Yesterday” which is currently occupying the Richard A. and Rissa W. Grossman Gallery. The artist approached his lecture with the same humor he brings to his work. Through the talk, Wegman offered a deeper look at his artistic process and spent ample time discussing each artistic medium and his progression between different forms of expression.

“It’s taking everyday situations and making it slightly more normal,” in response to his photograph called “Home Entertainment.” The image shows Wegman holding a television set while a woman watches from a sofa.

Wegman’s most well-known work depicts his large dogs posed and costumed in chic clothing, usually imitating humans. Wegman’s photography of his dogs has even been featured on the show “Sesame Street” and in many books. However, the particular exhibit of Wegman’s work being presented at the college focuses on his earlier works in drawing, painting and video-art.

While the exhibit is centered on his early drawings, Wegman spent time addressing more recent projects as well, like his work with post-card paintings. The artist appropriates post-cards, oftentimes from bizarre sources to create compelling, layered images which fuse surreal paintings and commercial images. The result is an image that subverts our assumptions in a way that demands the viewer take a closer look. Wegman said this creation process was a difficult one for him.

The curators of the exhibit, students Julia Brennan ’17 and Lola Wegman ’19 both drew upon Wegman’s massive body of work to select pieces that revealed Wegman’s humor and cunning eye. While the striking Weimaraners that Wegman is most known for are notably absent from the exhibit, this leaves room for the artist’s imaginative sketches and clever wordplay.

While Lola Wegman curated an exhibit around her own father’s work, she still found herself discovering new things within his art.

“Flipping through [his drawings] it’s kind of bizarre how much of his type of humor was present in them, as well,” said Lola Wegman in an interview. “I think drawing is perfect for him. Like at home, all of his jokes are short, little weird snippets. I think that this lends itself to drawing or video best. His videos are kind of like drawings in the sense that they’re short little jokes and those are the jokes he makes every day.”

Brennan also appreciates Wegman’s ability to communicate his wit through a variety of mediums in his work.

“I think he shows the same level and the same sort of wit in all his pieces,” Brennan said. “That’s what I like about him the most – the cleverness in his art and how he uses that in several mediums and shows that in different mediums keeps me from choosing one over the other because they have that same element.”

Brennan said she hopes that from the exhibit, students will take away an understanding that “work” does not have to be overdone or polished to be sophisticated. Wegman echoed these sentiments in his talk, saying that there is often “one idea” at the heart of his drawings. Brennan noted that the sketches included in the exhibition exemplify complete work that maintains its roughness and authenticity.

“I think a lot of [student artists] struggle with keeping it messy,” Brennan said.

Wegman’s exhibition will be on display at the college until April 22.