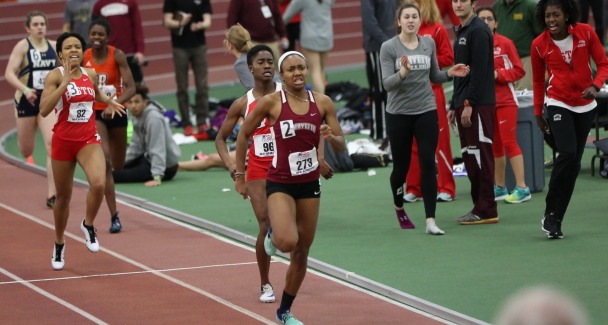 In their first meet since the Patriot League Championships, the track and field team broke several records.

Lafayette College’s track and field team traveled to Boston to compete at the ECAC and IC4A championships this past weekend. It proved to be an extremely successful weekend for the Leopards as three school records were broken at the Boston Track and Tennis Center.

“It is always tough to come back after the Patriot League Championships and this group responded well,” said head coach Michele Curcio. “Three school records, two All-East honors and two more season-bests allows us to close out the indoor season on a high note and helps us kick start the outdoor season.”

On the female side of the competition, senior Drew Davis returned to action in the 500m event after notching a top-spot finish in the 400m two weeks ago in the Patriot League Championships. She posted a time of 1:14.26, which was a new personal best and a new school record, and placed eighth overall in the competition. Davis earned a point for the Leopards and received All-East honors.

Sophomore Emily Moore also competed in the competition after setting a personal best in the Patriot League Championships two weeks prior. Moore set a new personal record in Boston this past weekend posting a time of 16:54.23 to secure the eighth spot in the competition and also notched a point for the Leopards and also received All-East Honors.

In the 4x800m relay sophomore Caroline Harmon, junior Alexa Kwapinski, freshman Crosby Spiess and senior Kelly Reager fell just shy of setting another school record posting a time of 9:05.04. This time earned them a sixth place finish and All-East honors, while also securing them a spot in the finals on Sunday. The next day the team returned to the track to grab a point for the Leopards with a time of 9:34.32.

To close out the weekend, the group of Kwapinski, Reager, Harmon and senior Tessa Broholm placed 14th in the distance medley and posted the second fastest time in school history.

The Leopards will return to action outdoors in the Seven-Way Meet slated for March 25 at the Metzgar field complex.