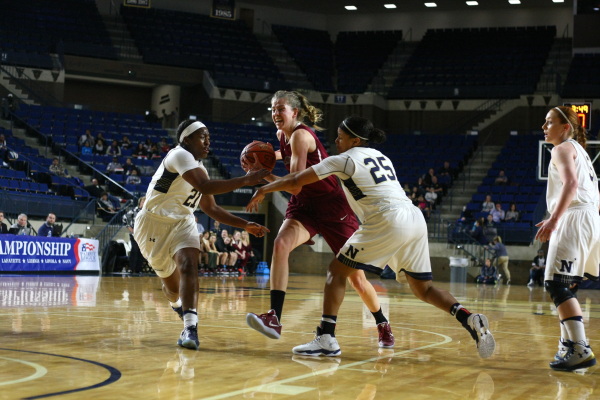 After only winning three regular season games, not many had high expectations for the women’s basketball team heading into the Patriot League Tournament. The Leopards, however, certainly may have turned some heads with their performance.

Finishing with the worst record in conference play, the 10th seeded Leopards were slated to travel to Worcester, Mass. to face off against the seventh seeded Holy Cross Crusaders. Lafayette lost to Holy Cross by six in their first meeting, but beat them in their second by fifteen.

The Leopards jumped out to an early lead and were up 28-14 at halftime. Despite Lafayette taking a 15 point lead into the fourth quarter, the Crusaders made a late run and shrunk the deficit to just one in the last minute. That’s when the Leopards’ defense tightened and didn’t let Holy Cross attempt a shot for the rest of the game, resulting in a 58-54 Lafayette victory.

Freshman Olivia Gumbs led the way for the Leopards, scoring 20 points and grabbing a career-high 15 rebounds. This was the ninth straight game in which Gumbs recorded double digits in scoring. Junior Anna Ptasinski contributed with 11 points of her own, while senior Ashley Lutz and junior Sammy Stipa added seven apiece.

What stood out for the Leopards was their defense. Although they only shot 33.3 percent from the field on the offensive end, Lafayette was still able to hold the Crusaders below that as they only netted 27 percent of their shots.

After defeating Holy Cross, the Leopards were then scheduled to play against second seeded Navy in Annapolis, Md. Earlier in February, the Leopards faced off against Navy in a game that went down to the wire, with Navy winning 68-65.

Both teams struggled on the offensive end, with Navy shooting 30.9 percent from the field and Lafayette shooting 24.6 percent. At halftime, the Leopards were down by six, but after a strong quarter they found themselves up by one heading into the final frame. That’s when the Midshipmen found their shooting stroke and outscored the Leopards 26-9 in the fourth quarter and handed them a 53-37 loss, knocking them out of the Patriot League Tournament and ending their season.

In her last game for Lafayette, senior Ashley Lutz went out with a bang, grabbing a career-high 19 rebounds and adding six points. Senior Harriet Ottewill-Soulsby also had a strong last game, scoring a team-high 12 points and snatching seven rebounds of her own.

One area that the Leopards particularly struggled with was turnovers, where they gave up 19 compared to Navy’s six.

Although it was a rough season overall, the women’s basketball team finished on a high note with an impressive performance in the Patriot League Tournament.