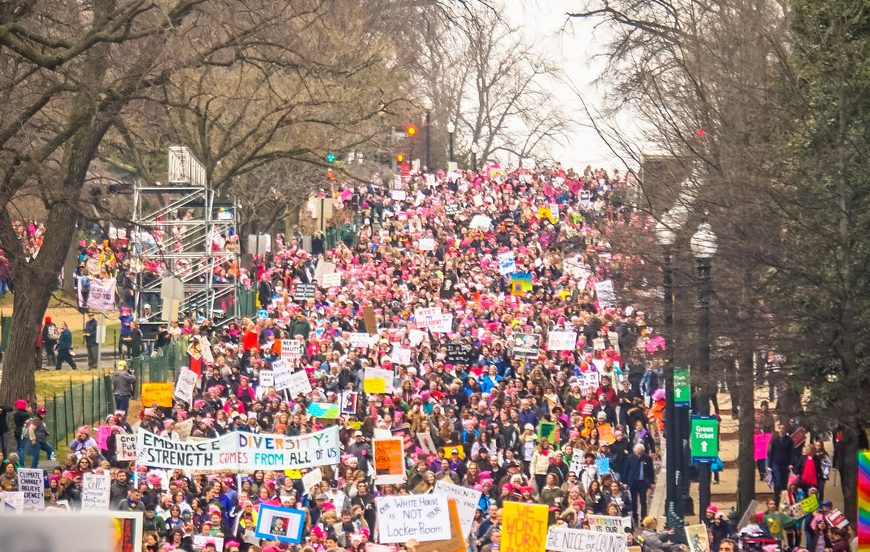 Women’s History Month had its origins as a national celebration in 1981 when Congress passed Pub. L. 97-28 which authorized and requested President Jimmy Carter to proclaim the week beginning March 7, 1982 as “Women’s History Week,” according to the Women’s History month website.

This year’s International Women’s Day included protests around the United States. Organizers of the Women’s March, which occurred the day after President Trump’s inauguration, curated “A Day Without a Woman” in light of International Women’s Day. According to an article in The New York Times, women skipped work, refused to spend money and wore red in support of the protest. Some schools even had to close on Wednesday because so many teachers did not come to school.

At the smaller level, the college has been holding ongoing events in support of International Women’s Day and National Women’s Week as well. On Wednesday, tables were set up in dining locations like Farinon and Marquis where students could sign petitions against things like the Global Gag Rule instituted by Trump. Many of the tables set up were occupied by student-run groups promoting reproductive rights.

The campus campaign #Fight4Her, run under an organization called Population Connection, also held a photo event on Wednesday, which included sending photos to Pennsylvania Senators in support of access to reproductive healthcare and contraception, according to a poster on the event. Students could use Snapchat, Twitter, Facebook or Instagram to tag Senator Toomey and Senator Bob Casey in their photos with the group’s hashtag also attached.

“I think it’s a time to celebrate women and recognize how much we contribute to this society but to also be aware of how far we still have to go to be considered equal,” said Anna Nollan ’20, who volunteered for the photo event. “So to me it’s a day of celebration and activism.”

All day Wednesday and throughout the week, students spoke out to express their appreciation toward the women in their own lives, via social media and other outlets. Considering the day is an international celebration, the day even served as a source of unification for students of different backgrounds.

“I like that it’s an international day for women,” L’Eunice Faust ’17 said. “I feel like in my education, things are so American centric. It has been unnecessarily male centric… But you realize there are so many women out there that have done amazing things and you realize ‘wow I can do anything too.’ So, I love it.”

View all posts by Samantha DeMarse →