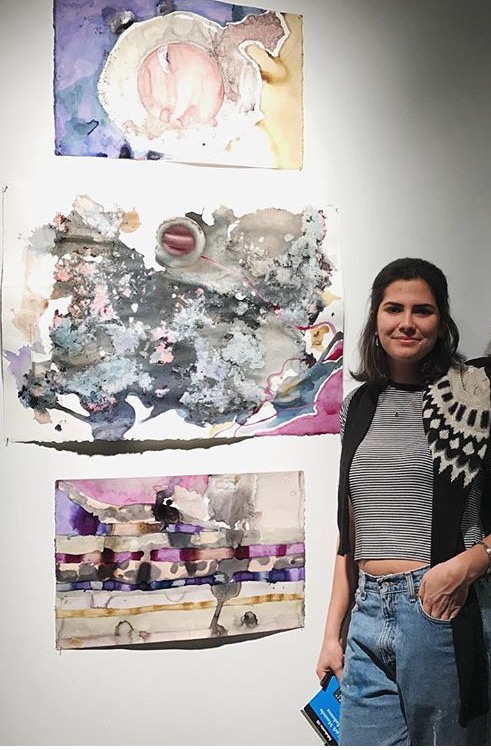 Lia Embil ’17 poses with a triptych from her project (Photo courtesy of Mailinda Hoxha ’19).

While some artists have specialties, for others, art provides the opportunity to explore varying realms of the creative world. Throughout her time as an art major, Lia Embil ’17 has immersed herself in all different types of art. She has always known that she wanted to complete an honors thesis, but she had no idea what her focus would be.

Embil’s concentration started off with painting, but she has had experiences as both a student and Teacher’s Assistant with sculpture, photo and drawing, as well. According to Embil, when she first began taking Drawing II last year, she expected it to be very technical and conceptual, which initially drove her crazy.

“Towards the end, I kind of learned to use different materials for drawing,” Embil said. “One of my final projects for that was to make my own dyes from different fruits and vegetables and then mix them with different oxides to create different colors.”

Embil’s process included painting with the unconventional materials and then drawing over them. For her project, she used Japanese rice paper to made a triptych, which consists of three pieces next to each other.

“[The triptych] depicted geologic occurrences in the world because I was taking also a Geology class, which I loved, so I kind of got inspiration from there,” Embil said.

When it came time for arts students to choose a topic for their art theses, they received critiques on their previous works. According to Embil, every critique focused on the triptych with the dyes and suggested she develop the concept. She agreed.

“I went on an interim trip to Ecuador and the Galapagos for this past interim and there I kind of smuggled out some lichen, which is very illegal because Ecuador bought the Galapagos Islands specifically for that lichen to make dyes with,” Embil said.

With the smuggled lichen and other materials, Embil has now narrowed down her focus to specific locations as she paints. She cuts the materials, cooks them in water and boils them down. According to Embil, the process takes two to three hours and, because the dyes do not last long, she has to paint right away.

“I can compare it to water color because that’s kind of the consistency of it on the paper, but it’s very different because it kind of bleeds in a very different way,” Embil said.

Throughout her work, Embil has created a general story, but does not feel like she can constrain herself too much because of the material itself.

“You don’t really know what’s going to happen,” Embil said. “[The dye] kind of does its own thing, which I kind of like because I’m creating some kind of control, but I don’t have all the control in what I’m doing.”

She is, however, set in her primary theme of isolation within different environments and man’s effect on these places. According to Embil, she plans to return to her original triptych concept, with each painting representing the Galapagos Islands, the Paramo or the Shamokin.

Embil intends to depict the Galapagos as very isolated and fragile. According to her, the Paramo, a high-elevation treeless plateau in South America, is also very fragile primarily due to global warming. The last location, Shamokin, is about an hour and a half away in Pennsylvania.

“Centralia is right next to it, which is a place where the [Earth’s] crust has broken open and there’s gas just coming out, so everyone has vacated,” Embil said. “There’s a town there and there’s these houses and streets, but it’s completely abandoned because it’s destroyed.”

While these themes of brokenness and fragility are Embil’s general focus, she plans to primarily emphasize the materials from those places. According to her, her unusual materials might prove beneficial when defending her work.

“I think I’m going to defend it a lot with the materials I use because that says a lot,” Embil said. “The subject matter will show itself, because it’s pretty abstract work.”