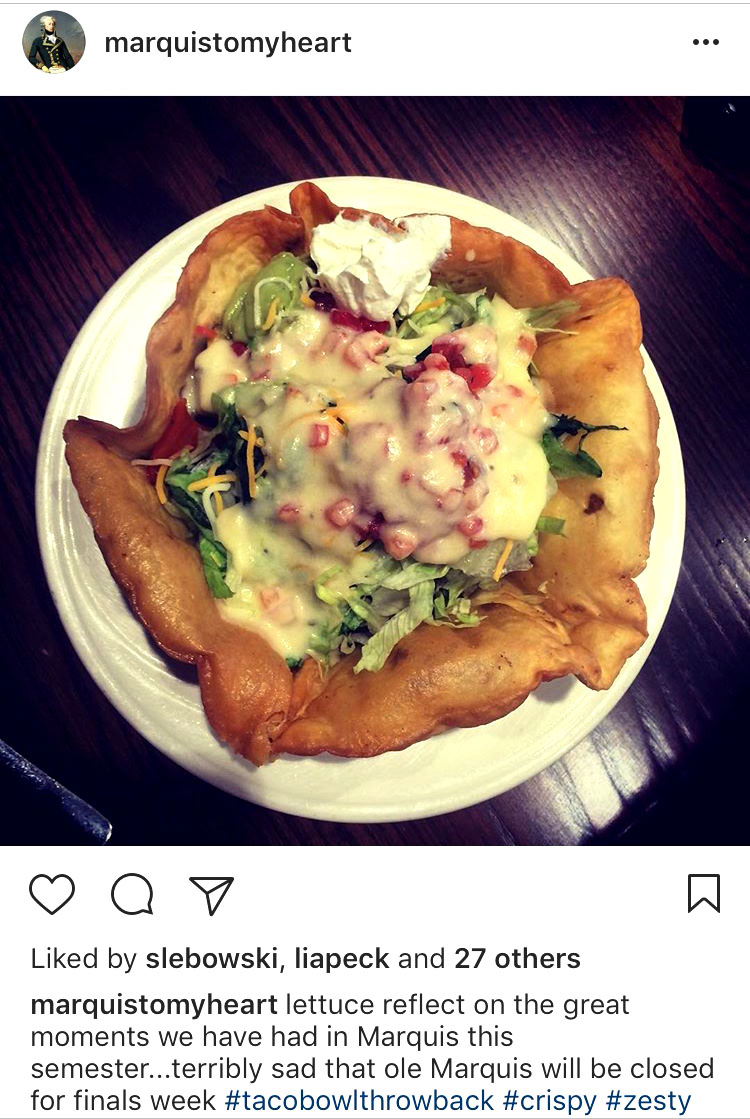 Food in Marquis might not always be picturesque, but that doesn’t stop Brandy West ’17. With an accumulation of 217 followers, she runs “Marquis to My Heart” (@marquistomyheart), an Instagram account dedicated to showing the highs – and lows – of the dining hall.

The first photo to appear on the account was a photo of a self-made salad followed by the caption: “first post is dedicated to a less than satisfactory salad..you win some you lose some #firstpost #salad #romaine #nomang #marquis #welcomeback #tellyourfriends #food #fork #friends.”

“I have an extreme passion for Lafayette and especially Marquis,” West said. “Marquis is a place for all of my good pals to gather to share a laugh or two! The food is not always A-1, but you always know the friendship will be. In an Instagram culture that is highly concerned with the beauty of food, I wanted to highlight the good, the bad, and the ugly that Marquis has to offer. It is not always tasty or pretty, but our account is real and raw.”

West also said she encourages her friends to contribute, so it has become an activity for them to joke about and bond over. After she and her friends graduate, she said this Instagram account will be continued.

Since its creation in 2010, Instagram has become an outlet for relatively every use. Students have profiles, fake profiles – more commonly referred to as “finstas” – and even finstas within those finstas. Companies, businesses and organizations use Instagram as an advertising tool. Yet one of the most common forms that Instagram profiles take are food instagrams, a.k.a “foodstagrams.”

Like many other colleges and universities, Lafayette is no stranger to food instagramming. Gillian Presto ’18, one creator of the popular foodstagram “New Fork City” (@new_fork_city), is a student at the college. Presto’s shared Instagram has been featured in articles published by Forbes Magazine and the Wall Street Journal. There is also a branch of Spoon University on campus, better known as LafSpoon, which publishes food photos taken by students.

While food instagramming may be primarily a hobby for West, it could be viewed as a potential business and future career. At any given time, according to various internet websites, hundreds of millions of food photos are posted.

In New York, where teenage foodstagrammers measure their followers in the hundreds of thousands, restaurants are increasingly courting the foodies to promote their restaurants, according to a 2016 article in Bon Appetit, a leading food magazine.

It’s gotten to the point where new restaurants are seeking out design input from food instagrammers, also known as ‘influencers’ when planning their restaurants. For example, one restaurant opted for marble tables because food photographs well over it.

View all posts by Samantha DeMarse →