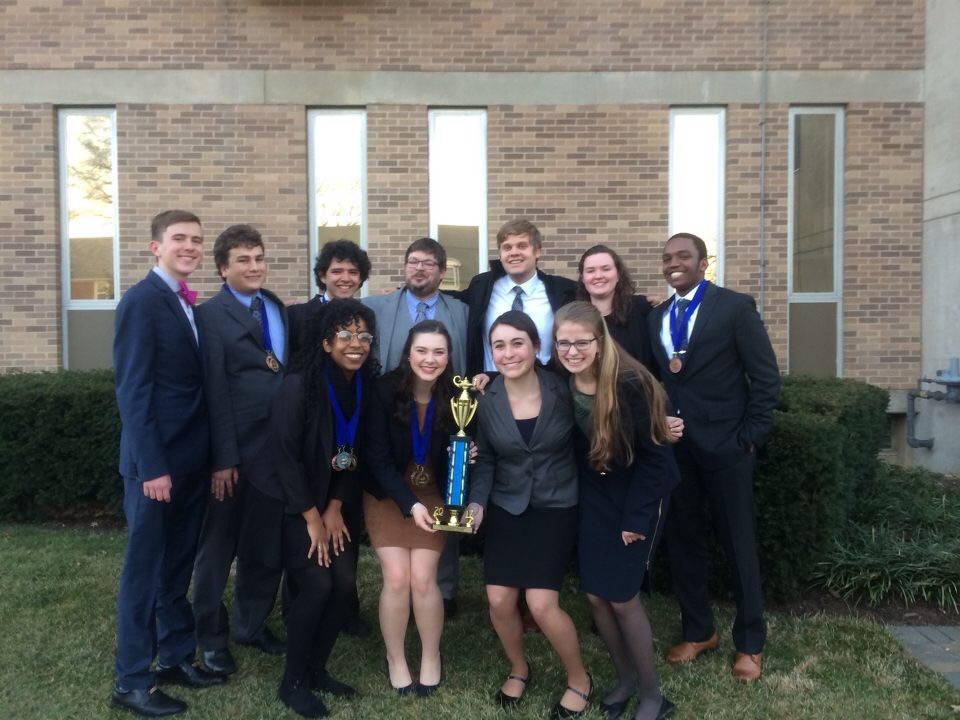 Lafayette Forensics Society after their victories. (Courtesy of Kaitlin Kinsella ’17).

Aaron Walker ’18 has watched for several years as the schools with bigger teams dominated Forensics tournaments, as has been the case since he first attended one as a first-year. As an impromptu speaker, he once found that “there were a lot of times when I’d get there and have nothing to say.” This year, however, the Pennsylvania Forensic Association’s annual tournament ended much more favorably for both Walker and the rest of the Lafayette College Forensics Society.

Director of Forensics H. Scott Placke offered insight into how the students prepared for the tournament.

“They begin working on many of their performances all the way back in August and September,” he said. “The last couple of weeks before the tournament get pretty crazy. Students are constantly stopping in to the team office run through their performances.”

Uncertainty surrounds every forensics event for the speakers, they said. While Walker dealt with the possibility of a prompt stumping him at an unfortunate moment in the impromptu speaking, Baptiste concerned herself with a worry based upon a rather unique challenge.

“From previous tournaments, I’ve been told that I don’t make my characters distinct. So that was my biggest worry,” she said. “Making sure that the audience knew which poem I was talking about at which time. In one poem, I was supposed to be an afro. That’s weird. How am I supposed to be an inanimate object?”

Nonetheless, Baptiste and the rest of the society were able to relax after their successful outing and enjoy the awards ceremony. Placke recalled that his favorite part of the tournament occurred after the event had come to an end.

“I loved the moment just after the award ceremony when the team got together to pose for pictures with the awards,” Placke said. “Everyone was so giddy and flying high on how they performed. That energy was amazing. They were so proud, and they had so much to be proud of.”

Congratulations to the team!