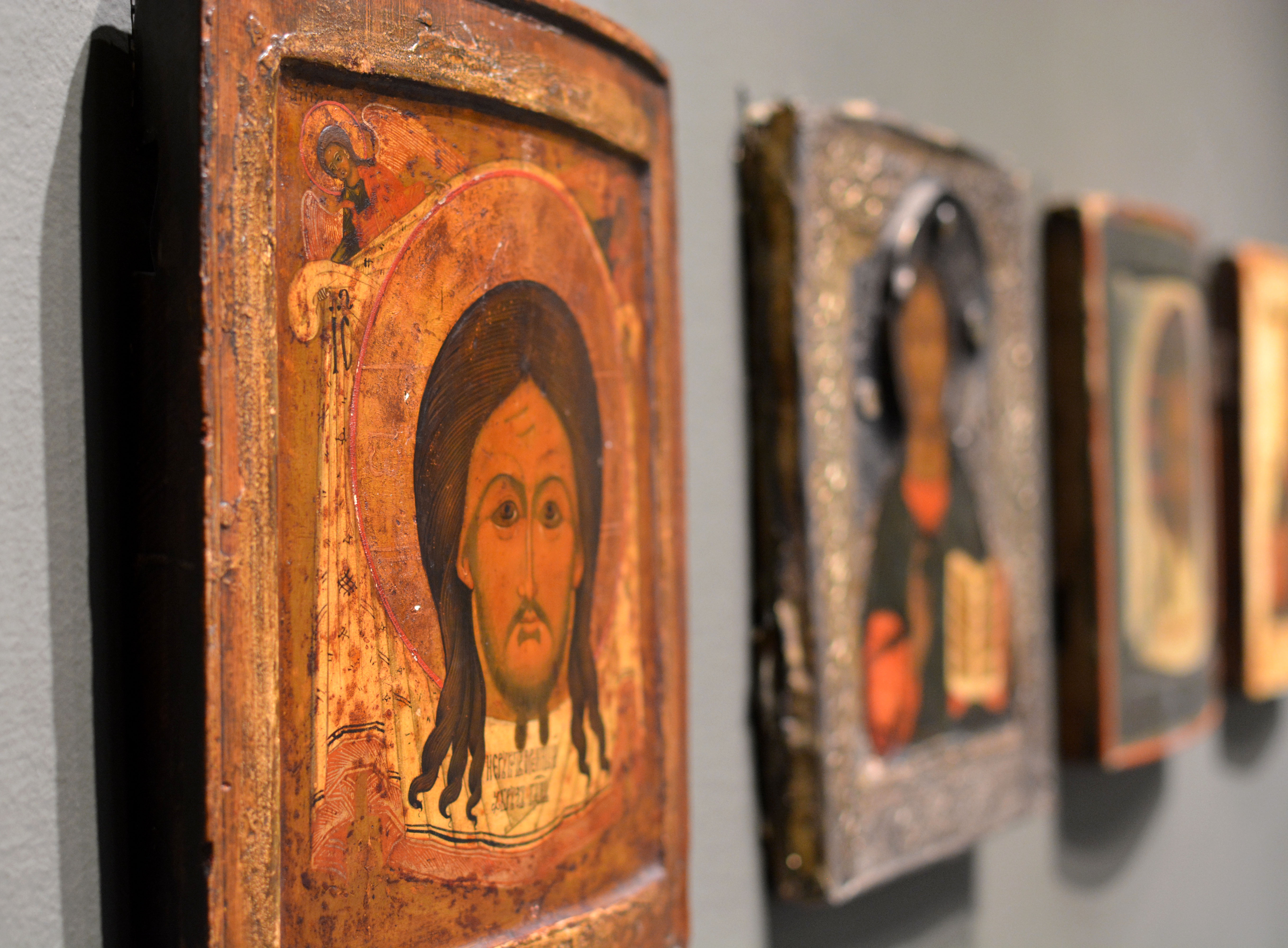 Upon entering the Williams Center Gallery, which is currently the home of a visiting exhibit of Russian icon paintings, viewers will come across over sixty icons on the walls. Walking through the exhibit, visitors will find one specific corner in which the icons are organized to exemplify a “Beautiful Corner.”

Ida Sinkević, curator of the exhibit, professor of art history and chair of the Russian and East European Studies Program at the college, explained that in Russian households, the Beautiful Corner is a sacred place where icons are displayed and admired.

The exhibition of Russian Icon paintings “Windows to Heaven: Treasures from the Museum of Russian Icons” opened Feb. 5 and will be in the Williams Center Gallery until the end of March.

The exhibit in the Williams Arts Center features icons from the collection of Gordon Lankton, founder of the Museum of Russian Icons in Clinton, Mass. The museum houses one of the world’s largest collections of Russian icons, with more than 1,000 icons spanning six centuries, according to a brochure on the museum.

The icons featured in the exhibit date back to the 15th century and are organized into four sections: Christ, Christian saints, the Virgin and Church holidays. The exhibit also features particular sections which are meant to help viewers understand the function of the icons in a domestic setting, according to a pamphlet on the exhibit provided by Sinkević.

“I organized and curated the exhibition because I wanted Lafayette students who are studying art of icons either in Byzantine art, Russian art or even in Introduction to Art History, I wanted them to see the real thing,” Sinkević said.

While the exhibit features mostly very old icons that cannot be touched by viewers, Sinkević pointed out one set of icons which visitors can touch and observe first-hand, called the “People’s Corner.”

The exhibit of Russian icons has, according to Sinkević, been a major topic of discussion in many art courses this semester, especially among the Russian and East European Studies department. In fact, Sinkević mentioned that one of her classes spends a majority of their class time in the gallery.

On Monday, Feb. 27, master iconographer and Russian painter Marina Forbes will visit the college as a supplemental lecturer to the exhibit. The lecture “1,000 Years of Tradition” will be followed by an icon painting workshop hosted by Forbes in the Williams Center Lobby on Tuesday, Feb. 28. Russian and East European Studies students will work with Forbes to create their own icons at the workshop from 12 – 4 p.m., according to a poster on the exhibit.

Forbes has been an artist for over 20 years, and many of her works are held in private collections in Russia, Italy and the United States, according to her website. Forbes currently teaches Russian culture and language at the New England Language Center in Rochester, where she is also the director of international programs, according to her website. She also leads art-related tours to Russia each year. According to Sinkević, Forbes has just traveled from Russia to be at the college for her lecture and workshop.

The opening ceremony for the exhibit was on Feb. 15 at the Williams Arts Center and featured a lecture from Sinkević, as well as performances of Russian sacral music from Lafayette Chamber Singers and artists Zingaresca Duo. The Zingaresca Duo residency was made possible by a generous grant from the Laros Foundation, established by M. Russel K. ’14 and wife Helen K. Laros, according to the event’s webpage.

According to Sinkević, the event was very crowded with students and people from the community alike.

“It was really celebrating the disciplinarity of Lafayette, celebrating global world and celebrating other cultures. Everything was there,” said Sinkević of the ceremony.

The exhibit is open regularly for visitors Mon. – Fri. 11 a.m. to 5 p.m and on the weekends from 12 p.m to 5 p.m. The exhibit will go through March 26, according to the Calendar of Events page.