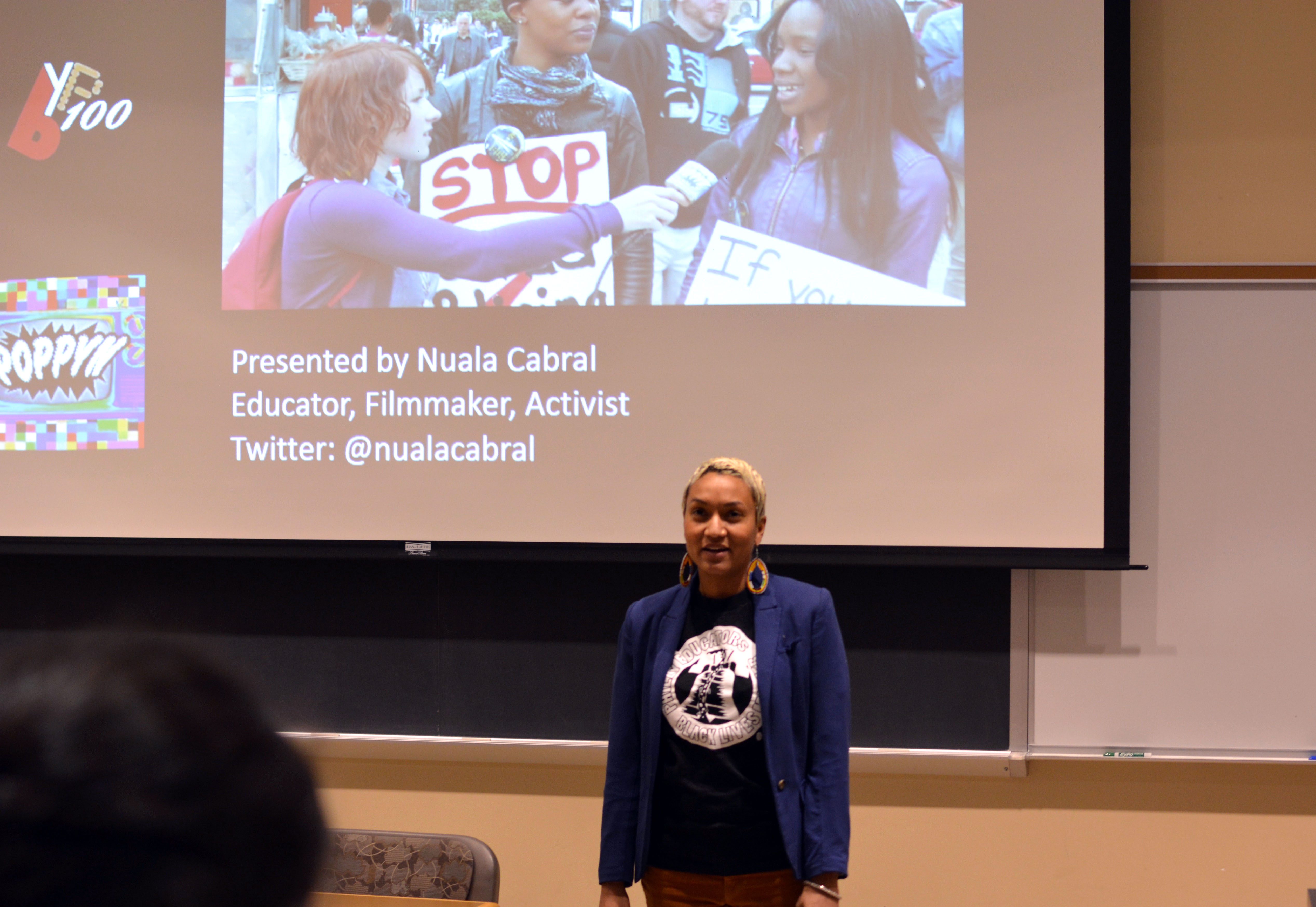 Nuala Cabral stopped her talk mid-way through to ask the audience to finish this sentence on notecards: “My greatest frustration with the media is…”

Some of the answers, read anonymously aloud, included “everything is made to comfort the male gaze,” and “certain groups are only talked about in one dimension but others are given diversity and representation.”

One student was frustrated that “[the media] is highly focused on the opinion of whoever is talking, instead of just facts and making sure people are informed.” Abby Smith ’20 wrote that she is frustrated that “there is very little an individual can do to change how the media reports.”

Like the audience’s answers, Cabral’s talk on Tuesday extended across a wide range of topics. Cabral, a co-founder of Fostering Activism & Alternatives Now, a media activist and literacy project, brought students, faculty and staff together to find out how to challenge what she saw as the media’s problem of stereotyping and oppression.

Cabral’s talk, “Talking Back: Challenging Stereotypes and Oppression in Media,” capped off both the Black Heritage Month and the Social Justice Events series. Cabral prompted a wide-ranging discussion of what media is, problems of the media and how to challenge oppression with students and faculty.

Challenging the media was a consistent overall theme that Cabral covered across all spectrums of media. But professor Kathleen Parrish, who teaches a journalistic writing class, said this approach was too generalized.

“I wish that she would have differentiated between the news media and the entertainment media,” she said. “They are two different things.”

Parrish also added that the ambiguity of the term media makes uncertain the claim that the media needs to be challenged.

For Cabral, people across the political spectrum had problems with addressing fake news, including President Donald Trump. One of the president’s tweet read, “The FAKE NEWS media (failing @nytimes, @NBCNews, @ABC, @CBS, @CNN) is not my enemy, it is the enemy of the American People!”

Parrish agreed that fake news is an issue, but was concerned that Nuala used an individual who spreads fake news as an example of someone who is worried about the problem.

“I was really sort of shocked that she let that [Trump’s tweet] stand as validation of her belief that the media is problematic because of fake news,” she said.

Smith, however, wrote in an email that it was “interesting that [Cabral] used a unique example” to portray this topic.

One of the last points Cabral proposed was the issue of lack of diversity in media ownership. Cabral explained how the marginalized do not see themselves in the media, compared to white men who are always portrayed.

She said the solution to this was to create more diversity in media ownership, to which Parrish agreed.

“More people need to produce independent media,” Parrish said. “More people of color or women need to lead media companies and be in charge of the creation.”

Cabral also manages communications and youth media at Temple University, where she earned her master’s degree in media studies and production.

Cabral said she hoped the audience “left a little more inspired about how they can be more proactive in terms of engaging with media, creating media and challenging media.”

Kamal Bookwala ’20 wrote in an email that she felt this talk was beneficial in showing the importance of media and how it can be used as a platform.

“It was an eye-opening presentation in a lot of ways,” Bookwala wrote. “Though I know that media has an impact to everyone’s perception of reality, I also learned how to make my voice heard, as well as which media sources aim for equality of representation and true facts without bias.”

View all posts by Lindsey Ganzman →