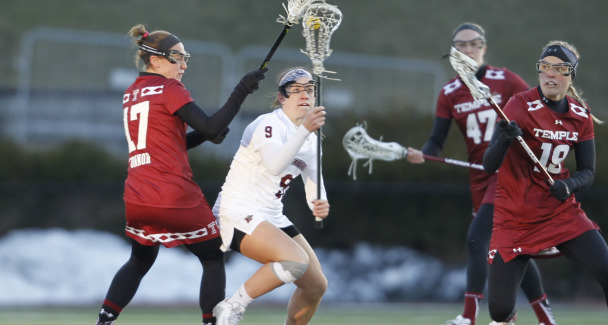 After a down season last year, it looks like the women’s lacrosse team is turning a new page.

The Leopards started off their season with two straight wins before falling to Rutgers in a tight matchup Tuesday night.

The team opened up their season in dominant fashion against Longwood. Sophomores Mairead Janzier, Jane Kirby and Emma Novick each scored four goals as they went on to defeat the Lancers by a score of 18-3.

“Our sophomore class has by far been the most improved,” senior captain Kirsten Wilhelmsen said. “It’s really evident in their production as well. Across the field, they’ve been producing a lot for our team and stepping up, which has been really cool to see. We were kind of aware of that through preseason. We saw that from the day we got back, so it’s been really good to see.”

Junior defender Dana Smith led a defense that surrendered just three goals against and allowed only seven shots, earning her the Patriot League Defensive Player of the Week award for the opening week of the season.

But it was Wilhelmsen, the senior star attacker, who took over in the second outing of the season. Wilhelmsen scored eight goals against Binghamton in a 17-14 victory. Kirby and fellow sophomore Hannah Davey added three and two goals, respectively, to seal the victory.

That is the most goals scored in a single game for a Lafayette player since 2001. For her performance, Wilhelmsen earned Patriot League Attacker of the Week honors.

On Tuesday night under the lights at Fisher Stadium, Lafayette took on a tough Rutgers squad and fell by a score of 15-10. Wilhelmsen netted four goals and Davey, Kirby and Novick each found the back of the net twice. Despite allowing a late four-goal run by Rutgers, the Leopards led in most statistical categories, including shots, ground balls and caused turnovers.

This is a vast improvement upon their performance against Rutgers a year ago, in which they fell to the Scarlet Knights by a score of 19-7.

“We’ve been setting some goals as a team throughout the preseason like making it to the tournament, beating a team we’ve never beaten,” Wilhelmsen said. “I think that this team definitely has the potential to do that.”

The Leopards will return to the field at Temple on Saturday afternoon to take on the Owls.